There are those jazz fans for whom the the mid-to-late 1960s was the period for jazz.  Blue Note Records was nearing the end of a decade when the label dominated the jazz market, Miles Davis and his Quintet were forging new paths for group interaction, John Coltrane was on a music and spiritual quest (cut short by his premature death in 1967) and "free jazz" was just beginning to make waves.

On Friday April 1, the Jeremy Pelt Quintet comes to Firehouse 12, 45 Crown Street in New Haven playing music that raises the spectre of the period described above and gives it new life. Trumpeter Pelt, a veteran of the "jazz wars" at the age of 35, moved to New York City in 1998 and has been a busy musician ever since.  Besides leading his own bands, he has worked and recorded with the Roy Hargrove Big Band and The Village Vanguard Orchestra as well as drummer Ralph Peterson's ensembles and the Cannonball Adderley Legacy Band.  He brings a well-seasoned band including Dwayne Burno (bass), Gerald Cleaver (drums), J.D. Allen (tenor saxophone) and Danny Grissett (piano), all leaders in their own right.  And, it's an ensemble that has recorded 3 Cds in the past 3 years as well as touring throughout the US and across Europe.  The Quintet's latest release, "The Talented Mr. Pelt" (High Note), came out earlier this year and is filled with mature tunes, inventive interplay, and strong solos.  You should expect more of the same when the band plays live (chances are very good they'll "kick it up a notch or 2" in person.)  For ticket information, go to www.firehouse12.com.  To learn more about Jeremy Pelt, go to http://jeremypelt.net.

Here's a piece by the Quintet from its first CD, "November", issued by MAXJAZZ and courtesy of IODA PROMONET.
Avatar (mp3) 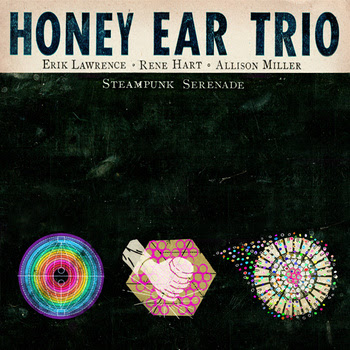 There's something about a trio of saxophone, bass and drums that can be so entertaining.  Whether it's Sonny Rollins with Max Roach and Oscar Pettiford creating "The Freedom Suite" or his joyous "Way Out West" (with Shelly Manne and Ray Brown) or the wonder-filled interactions of Henry Threadgill, Fred Hopkins and Steve McCall in (Trio) Air, there's so much one can do, especially if the musicians trust each other.

The Honey Air Trio - Erik Lawrence (saxophones), Rene Hart (bass, electronics) and Alison Miller (drums, percussion) - have worked together in ensembles led by trumpeter Steven Bernstein, composer/multi-instrumentalist David Amram, keyboard whiz John Medeski and the poet Robert Pinsky. Separately, Lawrence has worked with Allen Touissaint and Levon Helm, Hart with Branford Marsalis and Don Braden, and Miller most notably with singers Ani DiFranco and Brandi Carlisle as well as saxophonist Marty Ehrlich.  Thanks to a traumatic environmental event (the 2010 volcano eruption in Iceland), the 3 musicians found themselves with some free time so they decided to work - together.

The results of their labors can be heard on the group's debut CD, "Steampunk Serenade" (Foxhaven Records). There's much to savor in this program, from Hart's melodic bass work to Ms. Miller's intelligent drumming to Lawrence's dexterity and prowess on the 4 reeds in his arsenal (tenor, baritone, alto and soprano saxophones.)  Pieces like "High Water" and "Over The Rainbow" display how well the 3 musicians understand how silence can help heighten tension, can keep the listener involved, and how solos built off the melody can be so effective.  The band also has a playful side - the use of electronics behind the hip-hop rhythms on the title track is quite appealing while the sax and drums dance titled "Beautiful Nightmare" has such fine interactions (Ms. Miller's "sound palette is quite impressive, especially the cowbell.)  You could have a field day listing all the different styles of music referenced on the track. The incident that brought them together is celebrated on "Eyjafjallajokull (Icelandic Volcano Hymn)." Miller's subtle drums work beneath the folk music-like melody played by Lawrence and the rich tones of the bass makes this an arresting work. Lawrence's breathy and expressive baritone sax toys with the melody on "Collide-O-Scope", a work filled with more rich bass lines (plenty of chords as well) and subtle percussion (there's also electronic sound alteration going on as well.)

The spirit of Air permeates tracks such as "Whistle Stop" (one hears it in the way the melody line works against the rhythms) and "Olney 60/30"  (Lawrence's expressive tenor pushing back against the rhythmic tidal wave of percussion and bass.) And they can swing too - "Six Nettes", from the pen of Lisa Parrott, is a bluesy romp that switches gears at will thanks to the active drums and handsome walking bass lines.

"Steampunk Serenade" is music for those listeners who like to be challenged as they are entertained. On initial listens, one might not be sure where the Trio is going at times but there is no doubt that they are having fun. This music is often quiet but in a way that is seductive, aurally provocative and ultimately satisfying.  Kudos to the sound engineers, mixer and the person who mastered the sessions because the CD feels "alive"  (Ms. Miller's drums feels as if her kit is in the room where one is listening.) To find out more and hear them play, go to www.honeyeartrio.com.
Posted by Richard B. Kamins at 8:56 PM