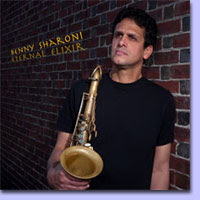 Eternal Elixir - Benny Sharoni (Papaya Records) - Although tenor saxophonist Sharoni moved to Boston, Massachusetts, in 1986 from his native Israel, this looks to be his debut CD as a leader.  His saxophone and compositional styles are based in his love for Wayne Shorter, Sonny Rollins, and Art Blakey & The Jazz Messengers.  With a strong group of sidemen, all of whom live and work in the Boston area, Sharoni gives his all and has created an enjoyable musical experience.

Highlights include the barn-burner "Bernstein" that opens the CD.  Prodded by pianist Joe Barbato (who plays on 6 of the10 tracks - Kyle Aho plays on the rest), bassist Todd Baker and drummer Steve Langone, Sharoni pays a musical tribute to the great composer and maestro with a track that would not be out of place on John Coltrane's "Live at The Village Vanguard." Guitarist Mike Mele delivers a slashing solo, with notes flying off the frets.  "Sunny", a huge hit for the late Bobby Hebb in 1966, gets a bossa-nova feel and features a flashy solo from trumpeter Barry Ries, more fine piano from Barbato and melodic yet muscular playing from Sharoni. The saxophonist's love for vintage 60s' Blue Note can be heard on 2 tracks  composed by Donald Byrd and 1 by Blue Mitchell.  Byrd's "Pentecostal Feeling" is funky church music that has a lively "jump" feel while "French Spice" has a modal feel in the opening and a classic hard-bop theme played by trumpet and saxophone. "The Thing to Do" has more of the gospel" feel and several short but pithy solos. There's a calm version of "To Life" (from"Fiddler on the Roof") replete with muted trumpet and breathy tenor solo that sounds influenced by Ben Webster and Coleman Hawkins. The CD's closing track, Sharoni's "Senor Papaya" (dedicated to his father, who still grows the fruit on the kibbutz), has that intense feel and drive that the opening "Bernstein" possesses. Sharoni wails atop the propulsive rhythms offered by Langone and the punchy chords of pianist Aho.

I had the opportunity to chat with Benny Sharoni several months ago and found him a person who loves jazz, life, and the world in general.  He's got a great attitude, the kind of musician who exudes positive thoughts, especially on the bandstand. His CD is quite enjoyable yet this is the sort of music that probably sounds better in an intimate performance venue.   For more information, go to www.bennysharoni.com.

In other notes, I have now posted a promo track on my review of Owen Howard's impressive "Drum Lore" CD - you can see and hear it by clicking here.
Posted by Richard B. Kamins at 9:37 PM