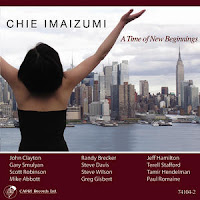 A Time of New Beginnings - Chie Imaizumi (Capri Records) - This CD, young Ms. Imaizumi's second as a composer/arranger/leader, must have seemed to her like a dream come true.  The 10-piece ensemble chosen to interpret this music is composed of many of the finest musicians on the creative music scene, from the reed section of Steve Wilson, Scott Robinson and Gary Smulyan to the brass of trumpeters Greg Gisbert and Terell Stafford (Randy Brecker appears on 1 track) as well as trombonist Steve Davis.  The rhythm section is anchored by bassist John Clayton and drummer Jeff Hamilton (Paul Romaine appears on 3 tracks.) Rounding out the sound is pianist Tamir Hendelman and guitarist Mike Abbott.

One can hear the influences of the Thad Jones and Maria Schneider on the melodies, harmonies and rhythm treatments on many of the cuts. Then, there is "Fun & Stupid Song", with its Caribbean feel in the drums (both Hamilton and Romaine play on this track and raise quite a racket near the end) and exciting solo from the great Scott Robinson (on sopranino first then switching to tenor.) Steve Wilson shines on soprano sax as he plays the melody lines on "My Heartfelt Gratitude", a pretty tune with a sprightly rhythm track.  Clayton, an expressive bassist in the style of the late Ray Brown and Rufus Reid, is a featured soloist on several of the tracks, including excellent arco work on "Fear of the Unknown" and the title track.  The former is a sorrowful ballad is primarily played by bass, piano and drums (the reeds and horns come near the end after a fine piano solo) while the latter jumps out with a fiery Latin rhythm and rich melody line.  "Sharing the Freedom", a commission from the US Air Force Academy Falconaires (and performed at the 2008 Monterey Jazz Festival) is both a stirring anthem and a funky workout with a rousing alto sax solo from Wilson.
There's more good music on the high-energy, "poppy", "Run For Your Life" with "hot" drumming and blazing trumpet work and the sweet ballad "Many Happy Days Ahead" featuring fine work from Wilson (flute), Smulyan, Abbott, Hendelman and Davis.

Chie Imaizumi has crafted an impressive program, rich with melodies, harmonic variations, fine ensemble work and compelling solos. There are many moments where her music transcends her influences and one can hear a major new voice in the making.  One hopes there are "many happy days ahead" for this composer and we listeners. For more information, go to www.thousandpictures.org. 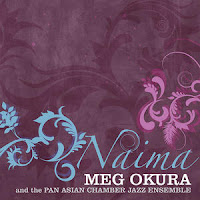 Naima - Meg Okura and the Pan Asian Jazz Ensemble (self-released) - Ms. Okura, a native of Tokyo, Japan, began her musical career as a classical violinist and coming to the United States to become a member of The New York String Orchestra at Lincoln Center. She went on to study at the Juilliard School and turned attention to jazz and improvisation after graduation. She's gone on to play with such notables as David Bowie, Mary J. Blige, Michael Brecker, Philip Glass, Lee Konitz,  Steve Swallow, Kanye West and others.  This CD, her 2nd as a leader, is ripe with invention, lively playing and imaginative arrangements.

Her ensemble, with such fine players as Anne Drummond (flute), Mamiko Kitaura (piano), Jennifer Vincent (bass), Willard Dyson (drums), Jun Kubo (shinobue - a Japanese flute,  flute), Rubin Khodelli (cello) and Satoshi Takeishi (percussion), does a great job taking this music off the page and making it come alive.  The program opens with the title track, a sweet rendition of John Coltrane's tone poem to his first wife.  The flutes and piano whirl around the violinist as she lovingly plays the melody. Okura's sweet solo opens with a direct quote from "Autumn in New York" and grows from there. Throughout the CD, the work of pianist Kitaura is impressive, from her solid support work on "Hannah's Vocalese" to the 2-handed "montuno" work on "Caprice" to her driving yet abstract fills on "Afrasia."  When she locks in with the rhythm section on the last track mentioned, the music lifts off. Dyson does yeoman's work throughout, not only directing the rhythms but also adding his fiery touch and/or soft colorings when called for.  Drummond, whose tone is so lovely, continues to impress both as a "team player" and soloist. Her funky turn on "Afrasia" brings to mind Herbie Mann while one may hear Hubert Laws on other tracks.

The focal point of the program is "The Lu Chai Suite", a 4-part work that goes in many directions through the course of  25 minutes. There's traditional Japanese folk melodies, hard-edged funk, Asian-inflected chamber music and a prayer (Part 4) that combines the Western influence of Aaron Copland with Japanese scales.  There's an American folk melody on the opening section. Titled "Empty Mountain", the piece intersperses Western and Eastern influences, with Okuta playing the melody on erhu (Chinese violin) and Takeshi providing sonic wonders on percussion.  Kubo's plaintive shinobue sounds lead in Part 2, "Echo of Voices", that soon opens up with a decidely Western backbeat and one high-powered piano solo. "Sunlight", the 3rd section is meant by the composer to sound Chinese and does so without sounding forced or treacly.

The words "Chamber Jazz" may scare some listeners away but this music sounds neither stuffy nor stifling. The fluidity of the rhythm section, the blending of flute, cello, and violin with the shinobue and erhu and the excellence of the compositions as well as the arrangements all adds up to a splendid listening experience. The more you listen, the more you hear - that is the hallmark of great music.  For more information, go to www.megokura.com or www.panasianchamberjazzensemble.com.
Posted by Richard B. Kamins at 10:56 PM