As most jazz lovers know, Abbey Lincoln passed away this past weekend at the age of 80.  Lincoln, who first came to public notice as an actress and lounge singer, changed her look and musical style in the late 50s and early 60s when she met and married drummer/composer Max Roach.  Their collaboration with songwriter Oscar Brown Jr. gave borth to "We Insist! The Freedom Now Suite", an  Lp released in1960 that became a musical landmark in the Civil Rights movement. Also on the recording was the great tenor saxophonist Coleman Hawkins, African percussionist Olatunji and the great young trumpeter Booker Little.  50 years later, the music can still raise goosebumps.

After her divorce from Roach in 1969, she moved to California and was less active in the music business.  In 1989, she signed with Verve Records and released 11 CDs, the last being "Abbey Sings Abbey" in 2007. She certainly displayed a singular style and, to my ears, was more of a storyteller, a griot, than a vocalist. Abbey Lincoln made you listen to what she had to say and did not fit easily into any one category.  And, on top of that, she wrote many powerful songs.  Check out Doug Ramsey's column on Ms. Lincoln at his "Rifftides" blog (click here) - his short tribute features 2 videos and a link to Nate Chinen's obit in The New York Times. 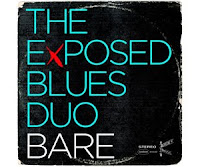 Listening to "Bare", the new CD by The Exposed Blues Duo (Greene Avenue Music), one can hear the influence of Ms. Lincoln on the vocalist Fay Victor.  She does not actually sound like her or phrase her lyrics in the same fashion, but Ms. Victor is just as fearless.  Granted, she and guitarist Anders Nilsson (also a member of her 4-piece Ensemble) perform Ms. Lincoln's lyrics to Thelonious Monk's "Blue Monk" but their version is closer to Skip James. Born in the Mississippi Delta, James (1902 - 69) was notorious for his elastic rhythm, especially in his later years after he had been rediscovered.

Victor and Nilsson really make this music their own, bending pieces such as "Mood Indigo" into new and creative shapes.  The Ellington/ Bigard tune is slowed down, with slithery slide guitar riffs and plaintive vocal.  For the first 115 seconds of Rev. Gary Davis's "If I Had My Way", the unaccompanied Ms. Victor stretches out the first line of the song and continues to do after Nilsson joins her.  It's hypnotic, eerie and forceful. "If You Don't Give Me Just What I Want" is much lighter, the Duo struts their stuff and there's some fine scatting from Ms. Vincent. The influence of James "Blood" Ulmer is noticeable during the first half of "Joshua Fit The Battle Of Jericho", with Ms. Victor's percussive singing and Nilsson hard-edged and mesmerizing guitar work.

This music is so personal yet so universal, heartfelt, challenging and alive.  Fay Victor and Anders Nilsson take their time, neither rushing the music nor shortchanging the lyrics.  At home, I was on the edge of my chair - in person, the room must be electric with the passion and commitment the artists convey through their music. To find out more, go to www.fayvictor.com. (The CD goes on sale August 31.) 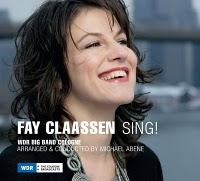 Dutch vocalist Fay Claassen interprets Abbey Lincoln composition, the oft-recorded "Throw It Away" on her new CD, "Sing!" (Challenge Jazz). It's a tribute to the composer's and the artist's creative interpretation (not to forget the excellent arrangement) that this version is so satisfying. Excellent and satisfying are just two of the positive adjectives to describe this collection. The recording features the 18-member WDR Big Band Cologne throughout and the splendid strings of the WDR Rundfunkorchester (on 4 tracks.) Arranged and conducted by Mike Abene, the program is adventurous (a smashing arrangement of "Tea For Two"), funky (there is such an effervescent groove on Joni Mitchell's "Be Cool" with wailing alto saxophone from Karolina Strassmayer), and often clever (touches of the Count Basie Band on "Is You Is or Is You Ain't My Baby" with excellent "strutting" drums from Hans Dekker.)

The choice of material reflects a world view, from Miriam Makeba's "Umhome" (nice use of vocal overdubs) to Bjork's "Cover Me" (splendid arrangement by Abene for the big band and strings) to Jobim's "A Felicade" (sung in Portuguese over swing then samba rhythms.)  Betty Carter's "Tight" has the vocalist showing the influence of Carter's unique vocal style while the band swings like mad.

There is not a weak track on "Sing!" Claassen's voice is strong, her phrasing, at times like a rich alto saxophone and the arrangements uniformly excellent - one gets the feeling Ms. Claassen sang as the band played and not to already recorded tracks.  And, Abene's intelligent integration of the strings into the music shows great thought.  Don't pass on this recordings, it's one of the best of the year.  For more information, go to www.challengerecords.com or www.fayclaassen.nl. 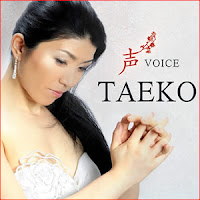 But, it's TAEKO's show from the opening moment and she displays a supple, dusky (at times) voice, good control of dynamics and a fine understanding of the lyrics. Her choice of material is certainly eclectic, with Sly & The Family Stone's "Stand" next to Stanley Turrentine's "Sugar" and Duke Ellington's "I Didn't Know About You."  Not "supper club" material but a set of songs for the modern "jazz club" and, because she has such an expressive voice, also a lot of fun.  To find out more, go to www.songbirdtaeko.com.
Posted by Richard B. Kamins at 10:37 PM