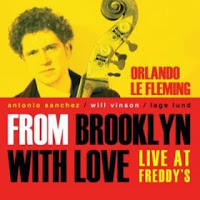 From Brooklyn With Love: Live at Freddy's - Orlando Le Fleming (19/8 Records) - British-born Le Fleming originally wanted to play cricket (and did) but has been a first-call bassist on both sides of the Atlantic for the past decade.  He's worked and recorded with Jason Rebello, Don Braden, Seamus Blake, Jane Monheit, Billy Cobham, Will Vinson and Lage Lund.  The last two musicians (alto saxophone and electric guitar respectively) are on this live date along with drummer Antonio Sanchez. The bassist wrote all 6 tracks and, while there are plenty of long solos, each track has a well-defined melody, choruses and pleasing interplay. That's good, because with 3 cuts over 12 minutes, the quartet is asking a lot from the listener at home.  In person, it's easier to relate to what the musicians are creating. Another good aspect of the disk is that each player has a well-defined personality. Sanchez really pushes the band yet he can lay back and allow pieces, such as the title track, to grow in intensity without rushing to an early climax and having nowhere to go.  The blend of Lund's softer electric tone with Vinson's probing and often limpid approach to the alto sax makes them a formidable front line.  The quartet works together well throughout but especially on "Rummaging For Significance" where the active and propulsive bass lines, the poly-rhythmic drive of the drummer and the interwoven melody lines truly gel. They do catch fire on the opening track, "False Dilemma" yet there is clever use of dynamic variation to keep the 12-minute track engaging from beginning to end. "Enchantress" opens with a long, unaccompanied, guitar solo displaying Lund's affinity for Jim Hall and the way that veteran guitarist caresses a melody.  After that, Vinson gets to present another handsome theme and the ballad moves gently along.
Recorded by master photographer Jimmy Katz, this debut from Orlando Le Fleming  has much to offer the serious listener.  Despite initial fears, this is no "blowing" date but fine music played with fire and grace.  For more information, go to www.orlandolefleming.com or www.nineteeneight.com. 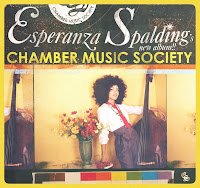 Speaking of bassists, NPR.org is offering Esperanza Spalding's new CD, "Chamber Music Society", to be released at the end of the month by Heads Up!, in its "First Listen" program.  You can, and should, listen to a stream of the entire CD, recorded with pianist Leo Genovese, drummer Terri Lynne Carrington, a 3-piece string section (playing arrangements by Gil Goldstein) and guest vocalists Gretchen Parlato and Milton Nascimento.  Spalding, who is rarely photographed without her acoustic bass, sings throughout the program and her voice is quite attractive and natural (like Ella Fitzgerald and Kendra Shank, Ms. Spalding knows how to enunciate without losing or hiding the musicality in her voice.)