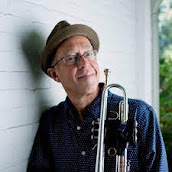 30-plus years into a fascinating career, one is still impressed by the music Dave Douglas composes, records, and performs.  When you think that trumpeter, educator, Greenleaf Music head, podcast host, festival coordinator, and so forth, is most comfortable in one of the various quintets he leads (or co-leads, in the case of Sound Prints), he'll record a solo trumpet album ("Hudson Solos") or work with an ensemble made up of students from Australia's Monash University ("The Dream: Monash Sessions") or record hard rock funk music for listening to during demonstrations with bassist Melvin Gibbs, guitarist Rhafiq Batia, and drummer Sim Cain ("Marching Music")––that's just in the last 24 months. 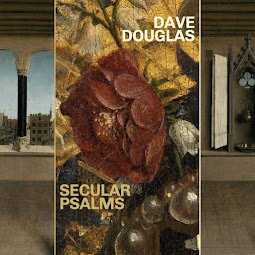 The trumpeter's new album, "Secular Psalms", is a 10-song program inspired by "The Adoration of the Mystic Lamb", painted between 1420-1432 and hung in Sgt. Bavo's Cathedral in Ghent, Belgium. Douglas initiated the project before the pandemic shut down the world, choosing a band (six members in all) from Europe and the United States; artists include Berlinde Deman (tuba, serpent, voice), Marta Warelis (piano, prepared piano, pump organ), Frederik Leroux (guitars, lute, electronics), Lander Gyselinck (drums, electronics), Tomeka Reid (cello), and the leader on trumpet and background vocals. The blend of tuba or serpent (a wooden brass instrument!) with amplified guitar, cello, trumpet, the various keyboards, and voice is fascinating.  While the music is inspired by 14th Century composers, there is a 21st Century "avant-garde" as well as 1960s-70s "prog-rock" feel (if there was a flute, this music could easily be linked to Jethro Tull (check out "Agnus Dei" and see if you agree).
You understand you are in a different musical right from the opening seconds of "Arrival".  The trumpet melody is supported by electronic sounds, cello, and the guitar with Ms. Deman's serpent playing a quiet counterpoint.  The drone created by cello and serpent carries the piece as does the subtle drive of the drums.  "Mercy" jumps forward with the trumpet and cello on the melody––the lyrics blend Marvin Gaye's "Mercy Mercy", "Kyrie Eleison", and a short phrase penned by Douglas. Leroux's funky, raunchy, guitar solo offsets the solemnity of the lyrics as does Ms. Reid far-ranging cello work. If you listen closely to the vocals, you can hear Douglas shadowing Ms. Deman's voice.
If you listen closely, not only are Ms. Deman's vocals important to the sound but so are her tuba and serpent contributions (that's her on the left). Listen to how she and Ms. Reid join with Gyserlinck to create a rhythmic flow on "Instrumental Angels" and how her counterpoint enlivens "Hermits and Pilgrims".  Her soulful vocal on "If I'm In Church More Often Now", based on lyrics composed by Christine de Pasan (1364-1430?), makes the poet's sentiment contemporary as we now see many people looking for answers from their spiritual leaders in these often-scary times.  Douglas's original "Edge of Night" closes the album, the lyrics speaking to how music can heal, can serve to push us forward, all the while the drone created by the pump organ, the cello, and the lute takes on a chant-like feel.  Leroux switches to electric, joining the trumpet, cello, percussion, and serpent in accentuating the closing lyrics "Making this music, will help us to heal/ Even as the world continues to reel/ We laugh/ We dance/ We love/ We pray/ Even as we mourn."
"Secular Psalms" is a stunning album, all the more so because all the parts were recorded remotely at different times, then edited and remixed by Tyler McDermid and Dave Douglas. The album stands out in the trumpeter's oeuvre not only because it's an amazing collection of music and performances but also because like 2012's "Be Still" and 2015's all-instrumental "Fabliaux", the songs, messages, and instrumental experimentation gives the listener deep insight into the trumpeter's inner life.  Listen and be moved!
For more information, go to https://greenleafmusic.com/out-now-secular-psalms/. To hear more and to purchase the album, go to https://davedouglas.bandcamp.com/album/secular-psalms.
Listen to "We Believe":
Saxophonist and composer Trish Clowes (pronounced "clues") hails from Shrewsbury, Shropshire, England. At the age of 19, she moved to London to study at the Royal Academy of Music. Seven years later (in 2010), Ms. Clowes issued her debut album "Tangent" on Basho Records––an ambitious project for sextet and, on two tracks, a full orchestra with vocalist. Two years later, not only did she release her second album as a leader ("And In the Night-Time, She Is There") which featured her touring quintet with a string quintet and guests, the saxophonist was named a BBC Radio 3 New Generation Artist. The BBC commissioned Ms. Clowes to compose for their Concert Orchestra which garnered her a British Composer Award in 2015. That piece of music can be heard on her third Basho release, 2014's "Pocket Compass", her first full album with her Quintet with three tracks featuring the BBC Concert Orchestra.  Over the next few years, Ms. Clowes kept herself quite busy with many different commissions and projects including "Emulsion", a fascinating improvised music "happening" that continues to this day.
In 2016, the saxophonist created MY IRIS, a quartet that features two members of her Quintet, guitarist Chris Montague and drummer James Maddren, plus pianist/ organist Ross Stanley. The bass-less ensemble's self-titled album was issued on Basho in early 2017 followed two years later by "90 Degrees Gravity" (also on Basho). The quartet was hoping to record in April of 2020 but the pandemic put that project on hold.  Ms. Clowes did self-release "MY IRIS Live!", a digital-only album through Bandcamp in 2020, a "low-fi" six-track set from an October 2019 live date. 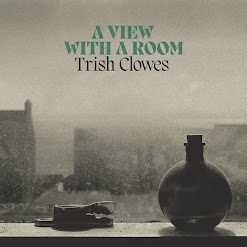 The group finally got into the studio at the end of August 2021 and the results of their efforts can be heard on "A View With a Room", Ms. Clowes debut for Greenleaf Music.  Still working with MY IRIS, many of the saxophonist's eight original pieces were composed during the world's lockdown. One can hear a restlessness, an urgency, in several of the songs such as the funky title track and the driving "No Idea".  The first track has such a "poppy" feel (note the bouncing piano line and dancing drums). The leader's solo is a joyful romp which leads right into pianist Stanley's spirited and playful spotlight.  Montague steps out next and he makes a more intense statement and the band picks up on that fieriness.  Ms. Clowes kicks off "No Idea" in musical conversation with drummer Maddren––notice how the piece then breaks into separate conversations (guitar with just drums before the piano reenters followed by sax, piano, drums, and quiet guitar). 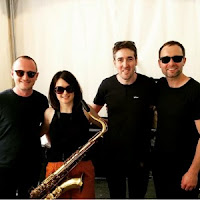 "Amber" is dedicated to Amber Bauer, CEO of Donate4Refugees, a London-based charity that Ms. Clowes works as an ambassador––if the charity's head is an energetic as this music, she'll do well.  The rhythm and main melody suggests Steely Dan (circa "Aja") and the band makes the most of the r'n'b swing of the piece. Guitarist Montague stands out on "Time", his Country-ish riffs reminiscent of Bill Frisell while there's a touch of Bruce Hornsby in Stanley's spot. The lovely ballad "Morning Song" is muted like the hour before daybreak, the handsome melody opening to a classically-inspired piano solo.  The short yet hushed tenor solo makes way for a powerful guitar statement and the set of fascinating chord changes before the close.

The program closes with "Almost". The piece opens rubato, scurrying brushes on snare, scattered piano chords, atmospheric guitar phrases, and disjointed saxophones phrase that slowly take shape into a lilting ballad. Nobody rushes but the song seems to grow more soulful as Ms. Clowes rides the guitar chords and the piano glissandos forward.  A shift in direction so that the guitarist can push the song forward and, as the intensity builds, the leader's soprano sax rises up above the rhythm section for a moment, like a colorful bird riding the thermals. Stunning, stirring, a momentary burst of pure joy.
Trish Clowes may be a new name to US audiences but do check out her music and, especially her work with MY IRIS.  "A View With a Room" feels like a musical balm, creating a sense of joy in the midst of complicated and often dangerous world––do spend time soaking in these sounds!
For more information, go to trishclowes.com/.  To hear more and to purchase the album, go to https://trishclowes-glm.bandcamp.com/album/a-view-with-a-room.
Here's the afore-mentioned "Amber": 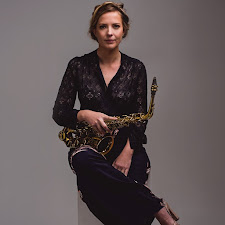 I first became aware of Australian-born saxophonist Angela Davis back in 2013. At that time, she was studying for her Masters of Music at the University of the Arts in Philadelphia, PA.  That was also the year Ms. Davis self-released her debut album, "The Art of the Melody". Two years later, her second album, "Lady Luck", featured the saxophonist alongside pianist Dan Tepfer, bassist Linda May Han Oh (who was also on the debut album, drummer Richie Barshay, and a string quartet. Ms. Davis moved back home, to Melbourne, where she serves as a lecturer at both University of Melbourne and Monash University.  She's married to trumpeter Mat Jodrell and they have a son, Max.  Since returning home, she's released one album, "Little Did They Know", for ABC Jazz, the label of the Australian Broadcasting Corporation. 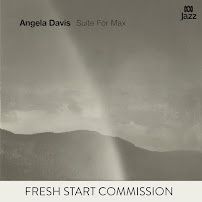 Ms. Davis's fourth album is the result of a Commission from the ABC Fresh Start Fund.  "Suite for Max" (ABC Jazz) is dedicated to her son born right before the pandemic. The five-movement, 36-minute, "Suite" features the saxophonist's "working" quartet including guitarist Stephen Magnusson, bassist Frank De Sario, and drummer Patrick Danao.  The opening "Movement" bears the influence of the Joe Lovano/ Bill Frisell/ Paul Motian trio, especially in floating rhythmic feel and Magnusson's guitar tone.  Max's father, Mat Jodrell, shows on the next track and his addition charges the album's atmosphere with Danao being more aggressive without overwhelming the music.  The leader's takes the first and most lyrical of the solos. The guitarist also creates a fine solo with his rippling phrases swooping and diving about the interactive rhythm section. 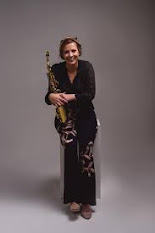 "Movement 4" opens like a quiet lullaby, Ms. Davis's gentle tenor leading the way. The handsome and fully-realized gives way to short solos then to the guitar and saxophone dancing around each other and landing back at the melody.  Bassist De Sario provides the counterpoint while the drummer moves from his cymbals back to a solid beat as the music draws to a close.  A tender guitar melody serves as a prologue on "Movement 5" which takes its lively feel from the engaging.  Ms. Davis's playing, at times, has a feathery feel as she was a leaf dancing on an Autumn breeze. Magnusson lets loose on his solo without jacking up his volume, making the most of the dancing rhythms of the bass and drums.   The saxophonist leads the band through a melodic coda, reminiscent of the way Keith Jarrett led his American Quartet (there's Paul Motian again) on their mid-70s albums.
"Suite for Max" won't shake your world but that's not its purpose.  The music that Angela Davis composed for this project is the result of her watching her son begin to move, begin to claim his own space in the world, all the while wide-eyed at wonders all around.   Ms. Davis rarely plays on the fiery side; instead, she gravitates towards the melodic side of music.  Listen to this music at the break of dawn or at the close of the day; it's such pleasant company!
For more information, go to https://angeladavismusic.com/.
Here is "Movement #2" from "Suite for Max":
Posted by Richard B. Kamins at 4:37 PM