The Majesty of Chicago and An Exemplary Trio

TUM Records continues its recorded celebration of Wadada Leo Smith in his 80th year on this plane of existence with two new albums.  Earlier this year, the Finnish label issued the solo three-disk set "Trumpet" plus a duo-trio three disk set "Sacred Ceremonies" that featured the trumpeter in musical conversations with maser percussionist Milford Graves and bassist Bill Laswell. Both albums are filled with captivating performances, sonic poems, a multiplicity of ideas, and a musical language that leads to new possibilities in an ever-changing world. 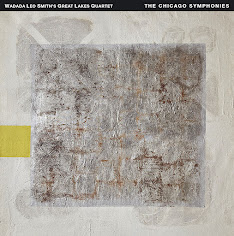 One can say the same about the two recordings TUM is releasing a month before Wadada's birthday (which is December 18). The first, "The Chicago Symphonies", consists of four separate works, "Gold - No. 1", "Diamond – No. 2", "Pearl - No. 3", and "Sapphire - No. 4: The Presidents and Their Visions for America" performed by the Great Lakes Quartet.  "Nos. 1 -3" features Wadada with Jack DeJohnette (drums), Henry Threadgill (alto saxophone, flute), and John Lindberg (bass) while "No. 4" has Jonathon Haffner (alto and soprano saxophones) instead of Mr. Threadgill.  The first three symphonies are dedicated to particular musicians that the composer met when he moved to Chicago in 1967 after five years in the Army.  Wadada joined the AACM where he met Muhal Richard Abrams, Anthony Braxton,  Amina Claudine Meyers, Leroy Jenkins, Joseph Jarman, and Mr. Threadgill plus many others –– all these were expanding the possibilities of Black Music; many of them still do.
Of all the myriad albums Wadada has issued in the past decade+, "Chicago Symphonies" bears witness to the influence of the people he came in contact with.  It's nearly impossible to hit the highlights as every track stands out but know this –– these are master musicians at play.  Mr. Threadgill's tart alto saxophone or the rounds tones of his flutes stand out while Mr. DeJohnette deftly drops into musical conversations with his three compatriots, playing with a freedom that not only displays his creativity but how intelligently he shapes each piece.  Mr. Lindberg's thick, often cello-like, bass tones and creative lines not only offer a sense of structure but he also shows he can step forward with his sparkling arco (bowed) bass work.  Wadada's trumpet pierces through the pieces while his muted work bears witness to the influences of Lester Bowie and Miles Davis.
"Symphony No. 4: The Presidents..." is dedicated to Presidents Abraham Lincoln and Barack Obama.  The text from "The Gettysburg Address" and President Obama's "Speech at the 50th Anniversary of the Selma to Montgomery Marches" are included with the physical albums and can also be found on the TUM website (address below). The six-part piece was recorded in 2018, over three years after the other Symphonies. As with the works dedicated to the many Chicago musicians, there are moments of urgency, joy, darkness, and unity that touch the mind and soul of the listener.  The emotion that one feels just reading the texts and the titles of the movements help to prepare the listener for the depth and breadth and, yes, the emotional strength of these musical performances.
The music and stories of "Chicago Symphonies" will keep you captivated throughout the four albums and all 165 minutes of music. Wadada Leo Smith's Great Lakes Quartet is in splendid form with the "Fourth Symphony" serving as this listener's introduction to saxophonist Jonathon Haffner (hope to hear much more) whose first gig with the GLQ was in 2017.  Listen closely!
To find out more, go to https://tumrecords.com/box-004-chicago-symphonies.
Here's the opening movement of the "Golden Symphony" dedicated to Amina Claudine Myers:
Braithwaite & Katz · Gold Symphony No. 1, Movement 1 - Wadada Leo Smith
Album # two, "A Love Sonnet for Billie Holiday", has Wadada in a trio setting with Mr. DeJohnette and Vijay Iyer (piano, Fender Rhodes, Hammond B-3, electronics).  Mr. Iyer first played with the trumpeter over 20 years ago; the pianist understands how Wadada's music moves, his role in shaping the pieces, and how to "converse" in the composer's unique musical language.  An interesting aspect to this program is that all three of the participants contributed compositions: there is even one totally improvised piece.  The music is lively, dramatic, at times stunning, and always on the move. 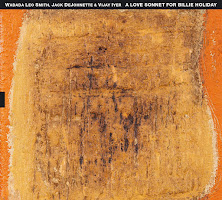 The title track opens the album (do listen below): it's a fascinating journey, from the four minute drum solo that develops over the first four minutes to the rousing three-way conversation in the middle of the nearly 12-minute piece to the emotional "blues" of the final 90 seconds.  An atmospheric Rhodes piano is heard at the onset of Mr. Iyer's "Deep Time No. 1".  If you listen closely, the voice of Malcolm X's speech "By All Means Necessary" can be heard (at times, electronically altered) while the trio moves around led by Wadada's muted trumpet, the soft piano chords and Mr. DeJohnette's rapid-fire trips around his cymbals. There are moments when the track suggests the influence of Miles Davis circa "Filles de Kilimanjaro" and "In a Silent Way".
The other three tracks include "The A.D. Opera: A Long Vision with Imagination, Creativity, and Fire, a Dance Opera" (dedicated to pianist, composer, and Wadada collaborator Anthony Davis), Mr. DeJohnette's affecting "Song for World Forgiveness" (wonderful musical interaction), and the trio improvisation "Rocket" that closes the album.  That final cut hearkens back to "Yo Miles!", Wadada's electric project with guitarist Henry Kaiser. Here's the Hammond organ leading the raucous trumpet and the frisky beat of the drums.  It's quite a finish to quite an album.
The cooperative trio of Wadada Leo Smith, Jack DeJohnette, and Vijay Iyer recorded "A Love Sonnet for Billie Holiday" on November 22, 2016 just three days short of its release date of 11/19/21.  Yet, the music sounds contemporary, fresh, and brimming with intelligence, wit, and an animated sense of adventure.  One could not ask for more (other than a second recording and a tour from this trio)!
For more information, go to https://tumrecords.com/060-a-love-sonnet-for-billie-holiday.
Dig into the title track:
Braithwaite & Katz · Billie Holiday: A Love Sonnet - Wadada Leo Smith
Posted by Richard B. Kamins at 5:57 PM