Just the Child in Me

It's nearly impossible not to like Joe Fiedler the person. The Pittsburgh, PA, native has a quick sense of humor, is curious about lots of different things, and is a hard worker.  Joe Fiedler the trombonist is a top-notch player who has shared stages with musicians and groups that range from Eddie Palmieri to Maria Schneider, Anthony Braxton to The Four Tops, and beyond.  The trombonist also played in numerous Broadway pit bands including the entire run of Lin-Manuel Miranda's "In the Heights" as well as the soundtrack for the recent movie production of the play.  Since 2009, Joe Fielder has been the music director for "Sesame Street", arranging, orchestrating, and conducting the eight-piece orchestra. On top of all that, he leads an eponymous trio, the all-brass quartet known as Big Sackbut, and the quintet Open Sesame. 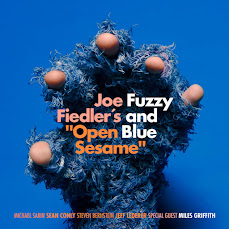 In February of 2019, Fiedler's Multiphonics Music label issued the album "Open Sesame", a 17-song collection 15 of which were from the children's show along with two group improvisations. And, what a group –– joining the trombonist was Jeff Lederer (soprano and tenor saxes), Sean Conly (electric bass), and Michael Sarin (drums) plus special guest Steven Bernstein (trumpet, slide trumpet). The same group, now with Mr. Bernstein as a full-time member, and Conly on mostly acoustic bass), is back for "Fuzzy and Blue" (Multiphonics). Also in the mix for two songs is vocalist Miles Griffith. 13 songs including one three-song suite and two-song medley make up the program with over half the songs credited to Joe Raposo who was the first music director on the "...Street".
Chances are good you'll recognize a number of these melodies whether you sat with your children or grandchildren watching the show or you grew up parked in front of PBS in the morning.  The proceedings open where they should with Raposo's "ABC-DEF-GHI" with Conly's bouncy bass line leading the quintet in with a funky Caribbean beat.  Lederer leads the way on soprano while the horns play rhythmic fills and harmonies.  The trombone stands in for Kermit the Frog for the initial run-through of "Bein' Green" then shares the verse with the soprano sax and trumpet.  The solos are quite enjoyable especially the leader's.  Later in the program, one can hear the Palmieri influence on the conga-line inspired "One of These Things."  Note how Conly's electric bass is the counterpoint on both the trombone and trumpet solos.

Miles Griffith shows up on Fiedler's "I Am Somebody" which features original lyrics by Reverend William H. Borders –– In 1972,  Reverend Jesse Jackson led a group of young people on the show in a call-and-response.  Here, the leader provides a funky tune for the vocalist to scat and dance upon while the quartet rocks. Griffith returns on the delightful combination of "I Love Trash" with "C is for Cookie"; Griffith's vocals are such fun, playful, constricting his voice to sound like Oscar the Grouch (he who lives in a trash can) and Cookie Monster (whose name tells of his reason for living).  There's a fun interaction for Griffith and the trombonist before the songs comes to a close.
You do not need to know the music of "Sesame Street" to enjoy the musical shenanigans of "Fuzzy and Blue".  The sound is full and bright, the beats are irresistible (Michael Sarin's drumming stands out throughout the album), the solos playful yet sincere, and the arrangements full of wit and just the right touch of wise-guy!  Joe Fiedler and Open Sesame are just the right antidote to seasonal doldrums –– if this music does not make you smile, tap your feet, or laugh out loud, best to rediscover the "kid" in you.
For more information, go to https://joefiedler.com/.  To hear more music and to purchase the album, go to https://joefiedler.bandcamp.com/.
Here's a taste:
Posted by Richard B. Kamins at 4:05 PM