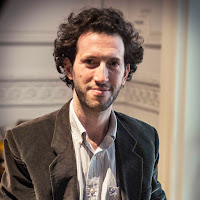 The music of Spanish-born (raised in Argentina) pianist and composer Emilio Teubal covers a wide swath of territory. One can hear classical influences, rhythms from his native lands mixed with modern sounds, and a love for lyricism that can be found in each of his recorded projects. His American debut album, 2013's "Musica Para un Dragon Dormido" (BJU Records), remains one of my favorite listening experiences (my review is here) while his 2018 recording "Memorias de Otro Tiempo" (Not Yet Records) is a splendid trio (piano, clarinet, acoustic guitar) that is lyrical and moving, forceful yet gentle, worth returning to time and again.  He's also recorded with the Tango ensemble of bassist Pedro Giraudo as well as a member of bassist Pablo Lanouguere's Quintet. 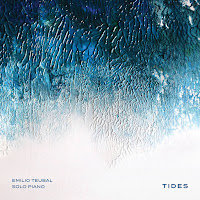 Teubal's latest album, "Tides" (New Focus Recordings/ Naxos) is a perfect antidote to our current International unease and fear of disease.  The nine original solo piano compositions and improvisations take a little over 33 minutes to listen to yet will reverberate through your mind and soul a long while.  Yes, the lyricism and innate sense of rhythm is present but it's the emotional richness of the music that is so striking. Pieces such as the title track (listen below) and the Stephen Sondheim-like "Playing" pull the listener in; both songs conjure up visions of the ocean as well as strong winds blowing through thick, leafy, trees.  There's also the playful melody and rhythms of "Tortuga" that dance out of the speakers, an artful tango with a mesmerizing rhythm.  "Rio" has a similar feel––here, the rhythms and melody intertwine in a way that moves forward incessantly, powerfully. The yearning, searching, melody brings to mind the great 20th Century Brazilian composer Heitor Villa-Lobos. While its not very long (1:48), "Tectonic (plates)" is dramatic, theatrical, and sonically striking.

"Tides" is beautiful music with pieces and performances that have power, dignity, a sense of playfulness, an emotional pull, and a sense of exploration. Emilio Teubal has presented to the world a personal yet universal panacea, music that will excite your senses and calm your fears or, at least, serve as a respite from the troubling times.

For more information, go to emilioteubal.com.

Ahh, the trombone.  In the right hands, the instrument can be melodic (Bob Brookmeyer), introspective (Julian Priester), raucous (Roswell Rudd, Albert Mangelsdorff), and playful (Trombone Shorty).  The instrument's use in Latin Music is well documented as it can bring listeners to the dance floor and make them move. In the hands of Joe Fiedler and his brass quartet Big Sackbut, it's all the above and more. The collected work experiences of the leader and band's members––Ryan Keberle, Luis Bonilla, and Jon Sass who plays tuba)––would fill the rest of this page and more. 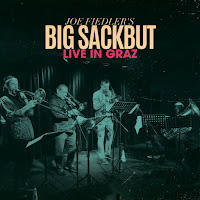 Joe Fiedler's Big Sackbut has just issued its third album, "Live In Graz" (Multiphonics Music/ self-released)––Keberle is the only constant member since the quartet's eponymous 2012debut album. Also a constant is the leader's joy in mixing genres, one minute you're feeling the implied "second line" rhythms on "Peekskill", digging into the funky blues on the ensemble's take on Charles Mingus's "Devil Blues" (check out the leader's "conversational" multi-phonic opening), and dancing through a playful take on Roswell Rudd's "Yankee No-How" (one of three Rudd tunes in the nine-song program). Pay attention to the deep "bottom" Sass creates on Rudd's onomatopoeic "Su Blah Blah Buh Sibi" (the chattering solos bearing a fairly close resemblance to a White House press conference). 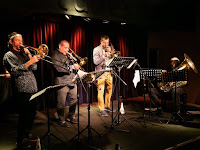 Fiedler's "Chicken" is one of the album's slower pieces––the handsome tune features fine solos from the composer and Bonilla.  Listen to Sass underneath the soloists as his counterpoint is so melodic. "Ways" brings to mind an Otis Redding-style "soul" tune while the program's closing tune, "Tonal Proportions", also has a ballad feel with a sparkling solo from Fiedler and sweet harmonies plus support from the other members.

"Live In Graz", recorded in Tube's Cafe in Graz, Austria, is quite the album.  The "low-brass" quartet Big Sackbut sets a high bar for music that involves the listener on many levels; yes, the performances are fun but also quite rich in melodies, harmonies, counterpoint, and fine solos.  The trombone has an impressive history, with works created by Mozart (one of the first to feature the horn as a lead instrument), Haydn, and others.  One might say that the 'bone's reputation has only grown since the instrument came in contact with musicians in New Orleans, Memphis, Chicago, San Juan, Havana, and NewYork City (elsewhere, I know).  Hat's off to Joe Fiedler, Ryan Keberle, Luis Bonilla, and Jon Sass for such a delight hour's worth of sounds!

For more information, go to joefiedler.com.