Pianist and composer Orrin Evans is not only the pianist in The Bad Plus, he also leads his own groups including the Captain Black Big Band. Evans organized the ever-evolving ensemble in 2009 in Philadelphia, PA, inspired by his years working with the Mingus Big Band plus a commission to lead a big band at a festival in Portugal in 2007. Evans has originally employed friends from the jazz community in New York City, mixing in students from Temple University and Philadelphia's University of the Arts. The CBBB, named for the pianist's father's favorite brand of pipe tobacco, is now based in The Big Apple 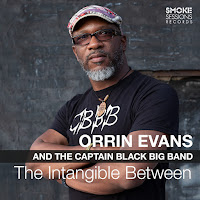 After releasing its first two albums on Posi-Tone Records, the Band moved to Smoke Sessions Records which released "Presence" in 2018. That album, recorded in Philly, featured a slimmed-down version of the ensemble (nine musicians instead of the usual 16-18) yet retains the power and raucous quality that has been the band's personality since its inception. CBBB's fourth album, "The Intangible Between", finds the ensemble back up to full strength, back in the studio, and creating thoughtful, exciting, provocative music.  Many of the tracks include two bassists, Eric Revis being one of them, and powerful soloists in each section – included are trumpeter Sean Jones, saxophonists Stacy Dillard and Immanuel Wilkins, and others – see personnel below.

The eight-song program opens with the thunderous "Proclaim Liberty" with powerful solos from Evans, Jones, Dillard, and one of the drummers. That's followed by the leader's fascinating arrangement of the Harry Dixon Loes's gospel classic "This Little Light of Mine."  The music opens into a propulsive rhythmic arrangement with the sections framing the soloists with phrases from the original melody.  The band pays tribute to Roy Hargrove with a handsome reading of late trumpeter's "Into Dawn".  Arranged by trombonist David Gibson, the finely-hone  melody is shared by the brass and reeds before a strong alto sax solo followed by an even stronger piano solo (listen for the short Latin groove and how Evans interacts with the bassists and drummer.

The final two tracks on the album also stand out.  "Tough Love", an Andrew Hill composition, utilizes the text of poems, one by Evans's brother Todd, to talk about social issues in the African American community. All the voices in the band, both their own and their instruments plus children chime in the opening moments over a bass accompaniment; the piece then opens up into a high-speed walking bass (actually two walking basses) and the leader takes over speaking his brother's poem.  After a few minutes, the entire band reenters and the music burns bright hot white as Evans takes on gun control and police brutality (extremely timely). Over the course of nearly 16-minutes, both words and the music gets more serious.

"I'm So Glad I Got To Know You" is dedicated to Lawrence "Lo" Leathers. The drummer, who worked with pianist Aaron Diehl and with Cecile McLorin Salvant, was shot to death in the stairwell of hs apartment in the Bronx, NY.  The track, composed by Evans, opens with a quiet piano solo before the band enters in an uptempo rhythm reminiscent of Abdullah Ibrahim (especially the brass and reeds melody) – the music picks strength as it dances forward until the reeds and brass drop out and everyone sings a mantra composed on the words in the song's title.  Powerful finish to a powerful set of music.

The Captain Black Band is getting better with age. Always run as more of a cooperative, with members contributing both songs and arrangements, the CBBB plays with fire and enthusiasm, eschewing labels and genres to create its own voice in a growing sea of large ensembles. "The Intangible Between" is essential listening at any time but especially in this time of social unrest and pandemic. Orrin Evans and company offer hope, humor, and beauty in this exciting 65 minute package.

For more information about the Bad, go to www.orrinevansmusic.com. 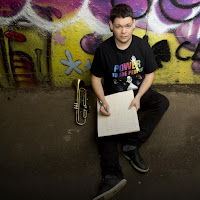 Trumpeter, composer, arranger, and band leader Daniel Hersog hails from Vancouver, British Columbia, Canada. He graduated from the New England Conservatory in 2016 where he met, studied, and worked with pianist Frank Carlberg, drummer John Hollenbeck, trumpeter John McNeil, and many others. He now teaches music and conducts plus serves as the composer for Big Band at North Vancouver's Capilano University.  He also teaches trumpet and leads the school's Trumpet Ensemble.  For his debut album, "Night Devoid of Stars" (Cellar Live), he's working with the 16-member Daniel Hersog Jazz Orchestra – most of the musicians hail from Canada are joined by saxophonist Noah Preminger (who is the "featured soloist"), drummer Michael Sarin, and pianist Carlberg. 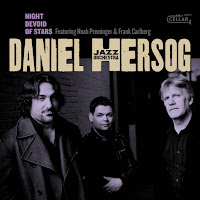 The eight-song program (seven Hersog originals plus a classy rearrangement of the venerable Jerome Kern piece "Smoke Gets In Your Eyes") shines from the opening seconds to the raucous closing track.  Close your eyes, don't read the liner notes, and make up own your mind; I heard music inspired and influenced by Bob Brookmeyer , Jim McNeely, Maria Schneider and Thad Jones plus Darcy James Argue. Yet, once you listen again, those influences mostly die away and each track begins to stand out.  "Cloud Break" starts off the album in a forward motion with the first five notes sounding like the melody of "Getting To Know You" – the melody opens up like a morning flower before the sections drop back for a delightful solo from trumpeter (and one of Hersog's mentors) Brad Turner. Sarin and bassist James Meger lock into the groove as the solo unwinds. The sections return to usher out the trumpeter, opening the door for Preminger's powerful solo – the Boston, MA-based saxophonist is in great voice throughout.

The pieces in the program feel as if they have been percolating for a long time but do not sound overworked. That's thanks to the fine musicianship.  Carlberg's long, rhythmical solo opens "Motion" with Sarin's cymbal work standing out. After he steps back, the reeds and brass sounds like a power blossoming before Preminger digs in for a powerful statement.  "Makeshift Memorial" is one of the loveliest large ensemble compositions of the past several years, voices echoing throughout the melody section – listen to how Preminger's saxophone wheels in and around the others reeds and the brass.  The title track flows forward in a joyous rush; note how the sections are integrated with the soloists, Preminger and Turner, and inspire to flights of fancy. I especially like the use of the flute and piccolo to add to the brightness of the music.


Carlberg, the brass and reeds, and the somber arrangement, all converge to give an original treatment to "Smoke Gets In Your Eyes." The pianist dances through his solo as if to dispel the cloudiness, leading to an introspective finish.

The album closes with two playful pieces. The stop-start beginning of "Indelible" leads to a medium tempo rhythm and then, the fun begins.  The spirited clarinet solo by Tom Keenlyside interacts with the piano until the trumpets return with bird-like chatter over a droning trombone note. Listen to how Hersog has the playful clarinets and flutes support the trumpet melody. The closing track, "Song for Henrique" (dedicated to pianist Henrique Eisenmann), opens with a classical flourish provided by the solo piano.  Then, the band jumps into a dramatic yet playful tango with the sections involved in the dance before Carlberg moves off into his solo. Preminger's solo takes place in rubato with rumblings from the brass while Sarin explodes underneath.  When the rhythm returns, the trumpets, acting like toreadors, lead the way to the end.

"Night Devoid of Stars" is a delightful introduction to the music and artistry of Daniel Hersog. During the hour-long program, he and his cohorts take the listener to so many places and through so many emotions. Listening to the Daniel Hersog Jazz Orchestra leaves one in a better frame of mind thanks to the creativity of the composer-arranger, the inventive solos, and fun that emanates from musicians doing what they love to do.  Kudos to Frank Carlberg and Noah Preminger for bringing more light to the sessions.

For more information, go to www.danielhersog.com.

Take a look and listen to the title track:

Throughout his career, trumpeter, composer, and arranger Bobby Spellman has played a multitude of styles; r'n'b with The Four Tops and The Temptations, Afrobeat with the Big Mean Sound Machine, large ensemble experimental with Charlie Kohlhase's Explorers Club and the Either/Orchestra, and a combination of all the above with his own Dingonek Street Band. Spellman also leads a Nonet that explores the sound of Miles Davis/ Gil Evans Birth of the Cool. Spellman's nine-piece has just issued its debut album "Revenge of the Cool" on Sunnyside Records. 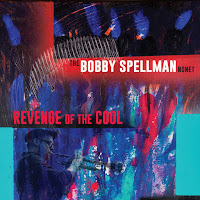 Spellman utilizes the instrumentation that Davis and Evans employed for their original projects and, entranced by the sonic possibilities, created his own music. There are some similarities that ones hears throughout; the leader is a fine trumpeter, the intelligent use of the "lower" sounds of the tuba (Ben Stapp), trombone (Tim Schneier), and baritone saxophone (Taylor Burchfield) plus the way Spellman's arrangements utilizes Evans-like harmonic clusters.  Also, the majority of the music captures the enthusiasm of be-bop that the 1950s recording demonstrated. There's a delightful wit involved here as well. Spellman's "The Isles of Langerhans" has a romantic title but is named for "the islets", or specialized cells, found in the pancreas of most vertebrates (discovered by 19th Century German physical Paul Langerhans). The tune is part of the leader's "Endocrinology Suite". Even better, the title does not detract from the fine performance!

The drum solo at the end of "...Langerhans" leads directly in to the joyful swing of "At The Brink" with the relentless drive supplied by bassist Andrew Schiller and drummer Evan Hyde supporting the solos of David Leon (alto sax) and Justin Muellens (French horn).  "Uncle Chip" opens with a spirited interaction between the leader and drummer before the entire plays the theme.  Note the fine piano solo (Ben Schwendener) which has echoes of Cecil Taylor and Don Pullen which leads to both a chattering solo from Leon and toying around with the tempo.

The Evans commecntion can be heard in the melody line and the writing for the bass and reeds on "Certainty for Uncertainty". The nonet takes its time playing the full melody before Leon steps into his solo followed by trombonist Schneier and pianist Eli Wallace.  "The Human Condition" closes the program on a raucous bluesy note; right from the leader's countdown into the tune followed by his hard-edged solo, the music has a late-night, smoky barroom feel. The brass and reeds don't enter until near the close of pianist Schwendener's solo and disappear again for Schiller's bowed bass solo(as does every but the drummer and occasional piano interjections. Everyone returns to (finally) play the "head" and take the tune out.

"Revenge of the Cool" is more than just a tribute to the classic "Birth of the Cool", it's also the sound of a composer-arranger coming to terms with his influences and moving beyond them. There's much to like listening to the debut album of the Benny Spellman Nonet – one fervently hopes that we get to see and hear the band play in person because one can tell from the album that the ensemble can really "hit it".

For more information, go to www.bobbyspellman.com. To hear some of the music and purchase the album, go to https://sunnysiderecords.bandcamp.com/album/revenge-of-the-cool.