Drummer and composer Rudy Royston, a native of Texas who grew up in Denver, CO, is one of the busiest musicians in contemporary music. Or, he was one of the busiest musicians until the pandemic. In an phone conversation just the other day, he told me his "gig book went from all into no ink" in a matter of hours.  He received several grants that helped to pay bills and it gave him the time to think about those musicians who were not being funded and how he could help. Royston had recorded a series of drums solos in 2013 just after releasing his debut album ("303") as a leader.  He sat back, listened, and talked with Greenleaf Records head Dave Douglas about releasing the solos as an album and using the proceeds to support MusiCare Foundation's "Covid-19 Musicians Relief Fund." 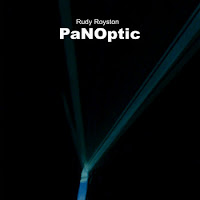 The album, "PaNOptic", comes out on June 19, "Juneteenth", and is well worth exploring.  Most people would argue that the drums are not a melodic instrument but, in the hands of someone as talented and dedicated as Rudy Royston, one can hear he's telling  stories throughout the 23-track program.  Whether it's the speaker-shaking "bLUes", the subtly etched "defeRRed" (complete with excerpts from Langston Hughes' "A Dream Deferred" and wordless vocal), or the gospel thump of "MOTHER KELLY and the preacher part 1", the attentive listener understands much of what is going on. He pays tribute to his drum mentors Elvin Jones, Max Roach, and Jack DeJohnette as well as the inspirations of fellow Texan Ornette Coleman and Thelonious Monk.  Royston also pays musical tribute to Bill Frisell with whom he has played and toured with for two+ decades.

If you have ever seen and heard Rudy Royston in person, you know just how fine a musician he is.  "PaNOptic" offers the listener the opportunity to spend a hour in the room with this fine person and to help him help other musicians make their way through these uncertain times.

To read more, go to https://greenleafmusic.com/rudy-royston-on-musicares-and-panoptic/.

Here is a teaser:

Drummer and composer Jerry Granelli, a native of San Francisco, CA, who has lived in Halifax, Nova Scotia, Canada since the early 1990s, is quite an interesting musician. He's played alongside bassist Charlie Haden, Sly Stone, Sonny Stitt, and Ornette Coleman.  Two of his earliest "high-profile gigs" in the 1960s were with pianists Denny Zeitlin and Vince Guaraldi – in fact, he played on the former's first three albums and on the latter's "Charlie Brown's Christmas" album.  In the 1970s, he worked with pianist Mose Allison. Granelli went out oh his own in the 1980s and has recorded a number of impressive albums that blur the lines between blues, jazz, and "free" music.  He's a prolific composer, is interested in electronic sounds, and has recorded with such great players as vocalist Jay Clayton, guitarists Dave Tronzo, Ralph Towner, Bill Frisell, Robben Ford, and many musicians. 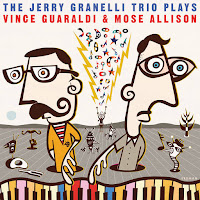 For his new album, Granelli recruited pianist Jamie Saft and bassist Bradley Christopher Jones to investigate the music of two of his early employers. "The Jerry Granelli Trio Plays the Music of Vince Guaraldi & Mose Allison" (Rare Noise Records) finds the trio exploring five pieces associated with Allison, three with Guaraldi plus two improvisations for bass and drums.  The album opens Guaraldi's "Cast Your Fate To The Wind"; the pianist composed the song after the seeing the 1959 Brazilian movie "Black Orpheus" and the 45 rpm version of the song was a surprise top 40 hit in 1962. Granelli and the trio capture the mysterious beauty of the opening section which introduces the lovely melody. Unlike the original, the Trio does not go into a conventional "jazz stroll" but keep the sonic sense of mystery going through until the fade.

The five Allison pieces are standards in the late Mississippian's repertoire. "Parchman Farm", named for the infamous Mississippi maximum security prison, allows the musicians to stretch out. Saft refers to the melody throughout his solo as Jones thick tones and Granelli's solid pulse drive him forward. "Everybody's Cryin' Mercy" captures the lowdown feeling of the original while the band lets loose on "Your Mind Is On Vacation" where the minimalist/ pointillistic approach of Saft's piano is countered by the powerful drums and throbbing bass. Hard not to move your body while listening to the three musicians dance through "Baby Please Don't Go" (credited as a "traditional" in the liner notes); the groove is there from the opening gun and it's fun to hear Saft bounce atop the rhythm section.

Besides the opening track, the other two Guaraldi pieces are "Star Song" and the album closer "Christmas Time Is Here".  The former is a gentle samba tha really shows off the virtuality of the bassist especially during his sweet solo.  The latter is, of course, from the "Charlie Brown Christmas"; for many young people, the music Guaraldi composed for the cartoon was the first jazz they ever heard.  The trio plays it straight with fine solos from Jones and Saft above the sympathetic and gentle drums and cymbals from the leader.

The  pair of drums-bass improvisations, "Mind Prelude 1" and "2", illustrate the fine conversational interplay of Messrs. Granelli and Jones. "1" takes place over a rapid-fire drum rhythm while the bassist flies over the delightful brushes work (note the booming bass drum). "2" has a similar feel to its partner with a more pronounced (and bluesy) melody from Jones.  The delightful sparring of the bass with the drums is a highlight of the album.

One should and could emphasize the word "Plays" in the album's title, "The Jerry Granelli Trio Plays Vince Guaraldi & Mose Allison".   The trio of Jerry Granelli, Bradley Christopher Jones, and Jamie Saft approaches this music with respect for the artists who created it and the joy of playing together, making fun music that has substance.  Feels good, sounds good – enjoy!

For more information, go to jerrygranelli.com.

Here's one of the Mose Allison tunes: 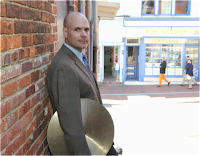 Drummer, composer, and educator Steve Fidyk began playing in front of audiences when his father, saxophonist John Fidyk, brought him onstage at the age of eight.  At the same age, the younger Fidyk discovered drummer Buddy Rich and one can hear some of that drummer's tremendous drive in the way Fidyk propels a band forward.  He later studied with Joe Morello (best known for his work with the Dave Brubeck Quartet) and spent 21 years playing with the Army Blues Big Band, an experience that took the drummer around the world playing for dignitaries as well as for troops stationed in the Mid East. While Fidyk has appeared on a number of recordings with the Army Band and others, his debut as a leader, "Heads Up!", was issued in 2014 on Post-Tone Records.  He released another album on the label in 2016 plus appeared on disks led by saxophonists Doug Webb and Walt Weiskopf plus organist Brian Charette. 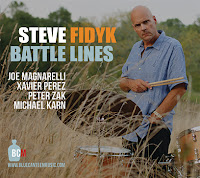 His third album, "Battle Lines", is Fidyk's first self-released recording (Blue Canteen Music) and finds him at the helm of a swinging quintet: Joe Magnarelli (trumpet, flugelhorn), Xavier Perez (tenor saxophone), Peter Zak (piano), and Michael Karn (bass).  The 11-song program features seven pieces by the drummer plus one each by Eddie Harris, Dave Brubeck, Blue Mitchell, and Charlie Parker. Harris's "Ignominy" leads off the album in an Art Blakey/Jazz Messengers mode with the drums front-and-center but not distracting from the fine solos by Perez, Magnarelli, and Zak. The handsome  waltz "Thank You (Dziekuje)" was composed by Dave Brubeck on a 1958 tour of Poland, has a lovely melody, and is infused with a blues feel.

Fidyk's "Bebop Operations" tells you much of what you need to know about the song and the inspired romp fills out the rest.  His "Battle Lines" is a high-speed romp whose melody is split between the saxophone and piano before Zak takes off on a dizzying solo propelled by the leader's driving drums and Karn's speedy bass lines.  Perez (also a member of the Army Blues Big Band) creates a delightful solo before ceding the spotlight to a short but impressive drummer break. The loveliest piece on the recording, "Lullaby For Lori and John", is a sweet ballad Fidyk wrote in memory of his parents, both of whom died in the last two years. Magnarelli's soft-edged flugelhorn frames the piece nicely (he also takes a fine solo) and there are short but eloquent solos from Zak and Karn.

After the ballad comes the aptly-titled "Churn" with its rolling bass lines, turbulent percussion, and a roiling tenor sax solo. Perez does a great job building his solo; with Zak's powerful chords pushing him ahead, the saxophonist sings and frolics.  The pianist takes a fine solo as does the leader whose drums fill the sound spectrum delightfully. That's followed by the joyous quartet (Magnarelli sits this and several other tracks out) take on Yardbird's classic "Steeplechase."  The musicians capture the spirit of the 1948 original, kicking the tempo up a notch or two. The album closes with Blue Mitchell's "Sir John", a medium tempo blues that, like the opening track, has that Jazz Messenger "sound".

Despite its militaristic title, "Battle Lines" is more of a party than a skirmish.  Steve Fidyk and company sound as if they were deep into the second set of a gig at an underground club.  It's always fun to hear music that is hard-driving yet relaxed at the same time. Everyone, including the listener, is having fun.  "Make grooves, not war" just might be this drummer's philosophy – give a listen and see if you agree.

For more information, go to stevefidyk.com.