Catching Up In December (Pt 1)

The Fall semester gets away from me and I miss new releases that deserve to be reviewed. Through the Holidays, that oversight shall be partially remedied (writers have to sleep, too!)

Several days before I was aware of the existence of this album, I wondered what had become of Don Byron. His recordings of the 1990s and 2000s had been full of amazing sonic adventures, from klezmer to blues to gospel to r'n'b and elsewhere.  While his recording output has slowed down, Mr. Byron has been appearing in concert halls, in workshops on college campuses, and elsewhere in the US and Europe.  Pianist Aruán Ortiz reached out and the duo began a collaboration that has resulted in their first album together, "Random Dances and (A)Tonalities" (Intakt Records). The program is a collection of originals, several classical pieces, and one composition each from Duke Ellington and Geri Allen. 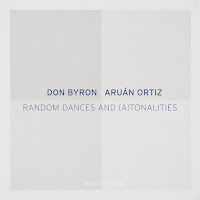 Notice in the picture above that Mr. Byron is holding a tenor saxophone.  He employs the instrument on three tracks; his delightful exploratory "Joe Btfspik", Ortiz's wide-ranging and classically inspired "Numbers", plus the playful take of the Ellington/ Bubber Miley classic "Black and Tan Fantasy".  That last piece, from 1927, has long been a staple of the jazz canon and the duo is faithful to the melody and the rhythm but certainly stretch out in the solo sections.  The humor is subtle but the swing is powerful, especially in Ortiz's left hand.  The clarity of the mix allows for both instruments to stand out without either musician dominating the piece.

There is a smashing version of Ms. Allen's "Dolphy's Dance". Both musical lock in on the themes and then take a wild ride during the solo section that has each person's lines swirl around the other, occasionally coming together then veering away.  Mr. Byron's solo reading of J.S. Bach's "Violin Partita No, 1 in B-Minor, BWV1002, II. Double" is stunning, the melody unfolding graciously but not as fast as several of the violin versions I referenced. Yet, the clarinet tone gives the music fascinating and different shades. The piece segues quickly into Mr. Byron's "Delphian Nuptials" - the original melody seems like a variation of Bach's melody but moves quite differently especially when Ortiz's melodic and flowing piano lines enter.  The album closes with an improvisation titled "Impressions on a Golden Theme" - the wide-open sound allows the music to develop slowly while the musicians move around through mutually created melody.

"Random Dances and (A)tonalities" grabs your attention from the opening lilt of "Tete's Blues" to the quiet fade of "Impressions..."  This is music that Aruán Ortiz and Don Byron developed slowly before committing to the recording. It never feels pedantic or "safe" - these are two musicians who can and will play anything not to show off but to get inside the music and find the humanity within. Splendid! 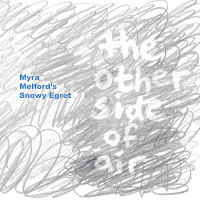 Just the name of this band - Myra Melford's Snowy Egret - is evocative of a particular sound. The quintet's second album - "The Other Side of Air" (Firehouse 12 Records) - also alerts the listener that the music will go in unexpected directions. Over her career that now spans nearly three full decades, the pianist and composer has created ensembles of musicians who help her shape the music. Snowy Egret consists of Ron Miles (cornet), Liberty Ellman (guitars), Stomu Takeishi (acoustic bass guitar), and Tyshawn Sorey (drums), each person a master of his instrument and sound.  Ms. Melford, with her multi-faceted compositions, gives material that explores all the different music she has studied performed, and inhabited.

If you are a long-time listener to Ms. Melford's music, I need not tell you what to expect. What amazes this listener is her ability to continually mature, to making music that sounds like on one else's yet is part of the creative music continuum.  As a player, her piano swings, whispers, thunders, caresses, pounds, and dances.  Her music is often episodic, starting with melodic or rhythmic idea, moving on to others, rarely turning back. There is the serene beauty of "Chorale" alongside the herky-jerky dance of "Motion Stop Frame" (a piece that goes from quiet to powerfully loud within seconds).  There's the "free" explorations of "Living Music" (listen to how the drums and the piano interact coming out of Ron Miles' solo!) to the emotional melody and performances of "Turn and Coda", the piece that closes the album.

Myra Melford creates music that makes one think deeply As you surrender to the myriad sounds created on any of her albums, you often enter into a universe that is welcoming yet challenging. With Snowy Egret, she works alongside musicians of equal musical status, interpreters and creators of the highest order.  Recorded in the Firehouse 12 studios in New Haven CT by Nick Lloyd (who also mixed and mastered the album), "The Other Side of Air" crackles and sparkles while opening new pathways for us to follow.

For more information, go to www.myramelford.com. 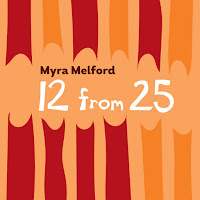 If you go to firehouse12records.com/album/12-from-25, you'll also find "12 From 25", a recording that compiles performances from Ms. Melford's week of residency at The Stone in March of 2015.  Snowy Egret is there as well as her duos with Marty Ehrlich, Ben Goldberg, and Allison Miller, her original trio with bassist Lindsay Horner and drummer Reggie Nicholson plus several more. Clocking in at over 90 minutes, this is a fascinating overview of her career. It's well worth your attention. 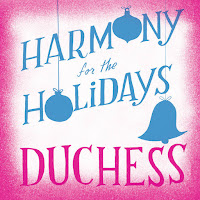 While Holiday albums (for me) usually go in one ear and out the other, when  Duchess - Amy Cervini, Melissa Stylianou, and Hilary Gardner - sings, I always pay attention.  The trio's latest recorded effort, "Harmony for the Holidays" (Anzic Records), is the three ladies addition to a crowded field.  Their trademark harmonies are in place, Oded Lev-Ari's are, as usual, intelligent, and the six songs (it's an EP and only available digitally) steer away from religious themes and towards creating a warm glow and making one smile (as well as sing along).   The ladies are accompanied by their cracker-jack band - pianist Michael Cabe, guitarist Jesse Lewis, bassist Matt Aronoff, and drummer Charles Ruggero - and the results are fun all the way through.

Opening with "Christmas Island", a Lyle Moraine song made famous by the Andrew Sisters in 1946, the ladies move on to "Santa Baby" (ah yes, the tune made famous by Eartha Kitt) and then to "Silver Bells" (first recorded in 1950 by Bing Crosby and Carol Richards).  It's a real treat to hear the trio share the lead vocals and when they harmonize, especially on "....Bells", one feels calm. The mist contemporary song of the program, "A Christmas Compromise", was first recorded in 2011 by co-writer Inara George and is the story of the tug-of-war celebrating Christmas creates in a mixed marriage.  Back to the tried-and-true for Frank Loesser's bluesy "What Are You Doing New Year's Eve" and the sweet blend of voices.  The "horn" section of Anat Cohen (clarinet), Nadje Noordhuis (trumpet), and Nick Finzer (trombone) join the band for the closing "Mele Kalikimaka", a delightful eggnog of Hawaiin and New Orleans influences first made famous by Bing Crosby and those Andrew Sisters in 1950.

This is an album to keep playing on repeat throughout the Holidays. Even grumpy old writers take heart from hearing Duchess blend its voices to bring good joy for all (and nary a hint of snark).

For more information, go to www.duchesstrio.com.

Here's one of the gems: