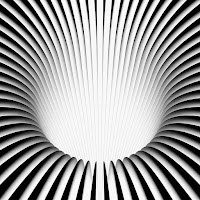 Even before one hears the music, there's the fascinating cover of "The Terror End of Beauty" (Sunnyside Records). It's looks like the negative image of a black hole, the phenomenon that occurs throughout the known (and unknown) universes. Then, listen to the music on this recording, the fifth from Harriet Tubman, the trio of Melvin Gibbs (electric bass), J.T. Lewis (drums), and Brandon Ross (guitars). It's a fascinating blend of funk, hard rock, r'n'b, noise, dance music, electronics, the songs hard-edged melodies propelled by the thundering bass and drums that shakes the speakers. Seven of the 10 tracks are credited to the trio plus producer/engineer/sonic shaper Scotty Harding, who takes the often-raucous material and helps to clarify and even muddy the sonic waters.

Listen to "The Green Book Blues", the tune named for "The Negro Motorist's Green Book", a compilation of articles published annually (and then sporadically) in one volume that helped to guide African Americans on vacation trips initially in 1936 for New York State travelers and, one year later, for journeys  throughout the United States. This modern blues tune builds off the rock-hard drums and fundamental bass lines, how Ross's processed guitars rails, rants and roars. 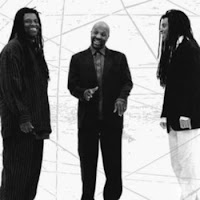 The album opens with the rhythmically charged "Farther Unknown" - one of two songs penned by bassist Gibbs, the piece dances in on delightful and hypnotic drums while Ross rises over the band with searing sounds.  Still, the tune quiets down for a gentle guitar melody over the composer's chordal bass lines. Gibbs also contributed the title track. Opening as a soulful ballad, the music slowly builds upon the bass and quiet drums for the first few minutes until the intensity levels rises; then, in a manner reminiscent of Jimi Hendrix, the thrumming bass, the rampaging drums, and the soaring guitar lines that roar even as they convey the melody, the music careers forward only to suddenly return to the opening melody before the sustained guitar chords fade away. 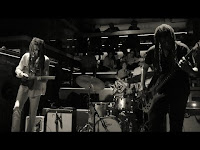 The album's one song from outside the band is a powerful reading of Bob Marley's "Redemption Song."  The various guitar lines and fuzz bass intro leads to a plaintive reading of the melody, originally recorded as an acoustic ballad. Ross's elongated notes slowly move forward until Lewis's drums (seemingly at the bottom of the sound spectrum) fade in and out threatening to upset the proceedings but never take over.

"The Terror End of Beauty" is Harriet Tubman's third album since signing with Sunnyside Records.  If you listen back to the band's 1998 debut recording "I Am A Man", you can hear that band's vision was fully firmed at that time. Two decades later, that vision has been been expanded while its focus has sharpened. Like the indispensable "...Green Book", Harriet Tubman (The Band) visualizes the pitfalls and dangers of the road ahead without offering panaceas but by being honest, open, and "in your face", all the while the music is in your ears and mind.

For more information about the trio, go to www.mmmusicagency.com/harriet-tubman-the-band.html. 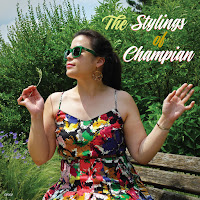 One gander at the cover of "The Stylings of Champian", the new  self-released double-disc set from pianist/vocalist Champian Fulton, and it's summer again.  One listen to this breezy album, decked out with standards and jazz favorites, and you'll be bopping your head. tapping your feet, wishing you were on the beach. She's in the company of her "New York Band" - the rhythm section consists of bassist Hide Tanaka and drummer Fukushi Tainaka with her father Stephen Fulton bringing the dusky sounds of his flugelhorn to many, but not all, of the tracks. Listen to how Dad swings on "I Only Have Eyes For You" and it's easy to hear Ms. Fulton learned how to swing. Thanks to her father, her first paying gig was the 75th Birthday celebration for his friend Clark Terry - she was 10 years old at the time.

Not only can Ms. Fulton play piano but she has a delightful, distinctive, voice. Listen to the vocal-bass duet on "Body and Soul" - she moves through the lyrics like a saxophonist, embellishing the melody like a saxophonist.  The interaction of that voice and the rich tones that Tanaka creates plus the fact that the song is a compact 3:14 and it's a true winner.  Throughout, the musicians create an intimate feeling on every song. Even when there's swinging with a purpose, the focus is on playing together and making older songs sound fresh and ones that the listener may not remember or even know (such as "Martha's Prize" from the pen of Cedar Walton) fascinating adventures. 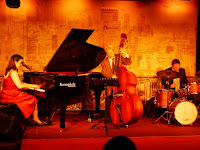 One can hear echoes of Fred Astaire on Irving Berlin's "It's a Lovely Day" - the great dancer was also a delightful interpreter of popular songs.  Father Fulton's flugelhorn dances along gracefully leading to a sly and sweet romp by his daughter. Her vocal on "I Didn't Know What Time It Was" (from the team of Rodgers and Hart) is supported by the dancing drums and highly melodic bass. When Ms. Fulton moves into her solo, the three musicians move as one. Her reading of "Lonesome and Sorry" (first recorded in 1926 by Jean Goldkette's Orchestra as well as Ruth Etting) leans a bit closer to the 1962 version by Nat "King" Cole yet still has a playful "swing" to it. 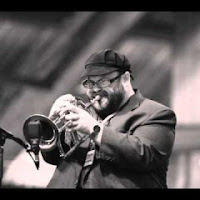 The album closes with a quartet reading of "All the Things You Are", an energetic reading that opens with a high-powered flugelhorn solo as the rhythm sections dances underneath. Ms. Fulton with an understated romp before the bassist struts her stuff. The song also features drummer Tainaka trading fours with father and daughter before the song closes on a coda that suggests the opening.

"The Stylings of Champian" is a treat from start-to-finish, filled with strong songs and excellent musicianship.  Champian Fulton is both a delightful pianist and an evocative, assured, singer, never just "going through the motions" to show off her "chops" but making each song her own.  This, her 10th album, is well worth exploring and enjoying!

Here's her take on the Irving Berlin tune: 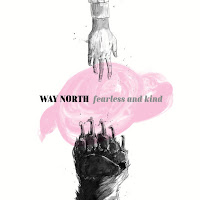 Way North is a quartet (three Canadians, one American) who organized in Brooklyn NY, in 2014. Composed of Rebecca Hennessy (trumpet), Petr Cancura (tenor saxophone, clarinet), Michael Herring (acoustic bass), and Richie Barshay (drums), they are each so busy as musicians, teachers, and festival organizers (Cancura is the Programming Director of the Ottawa International Jazz Festival) that they only get together sporadically to play. When they do, the music they create is a delightful amalgam of early jazz, gospel, and blues influences played with a sweetness and dedication that is truly "soul-deep".  The member's choice of material, original songs to interpretations of early jazz classics, will remind some of the classic Chicago trio Air; especially because the two "classic tunes" are Jelly Roll Morton's "Buddy Bolden's Blues" and "King Porter's Stomp", both of which appeared on the 1979 album "Air Lore."

"Fearless and Kind" (self-released) is the band's second release and the connection to Air's (Henry Threadgill, Fred Hopkins, and Steve McCall) classic work cannot be denied. The lack of a chordal instrument (although, like Hopkins, Herring is a melodic bassist), the active yet sensitive drummer, and the desire to show jazz is an ever-changing river of sounds are what connects them. It's such a treat to hear tunes such as "You Know A Song" and how Hennessy wraps her brash trumpet sounds around the buttery, bluesy, tones of Cancura's tenor while Herring and Barshay dance beneath them. Dance is a major component of many of the songs. "Boll Weevil" opens the proceedings - with its "second-line" drums and bouncing bass, the songs jumps forward with powerful solos from both tenor sax and trumpet. I dare you to sit still.  The muted trumpet introduces the title track, a ballad that moves ever-so-slowly. Listen to how Ms. Hennessy interacts with the bass and drums during her sweet solo. Then, the tenor sax rises up "testifyin'" as the rhythm section "drags" the beat.

The quartet is not stuck "in the tradition" but expands upon the various possibilities. The raucous and highly-charged "Airport to Knowhere" barrels forward on a head of percussive steam while "Birds for Free" has a sweet Caribbean feel in its rhythmic drive yet moves in numerous directions throughout the hardy tenor solo and high-powered trumpet spot.  Kudos to Mr. Barshay - his "stop on a dime" reflexes give the piece such its playful feel (with a subtle nod to the classic Atlantic Records Ornette Coleman Quartet).  The sweetness of the melody on the closing track,"The River's Flow", the intelligent interactions (such fine counterpoint throughout from Herring), and the splendid musicianship fills this observer with wonder. The four musicians try listen to each other. This music is not about "showing off" but about communal creativity.  The little touches on the track - the saxophone and trumpet without the rhythm section for 30 seconds, Barshay's "dancing hands" that support the bass solo - is so joyous.

I know consumers want music that fits their expectations but "Fearless and Kind" with its endless possibilities, really should opens one's ears to the delight of creative interactions. Yes, there's plenty of rhythmic fun,  numerous strong solos, but Way North is a true band, a honest collaboration of like minds, whose spirit and musicianship brings this listener such bliss.

For more information, go to waynorthband.com.

Here's a cut to savor: