With the recent commemoration of the 50th anniversary of the assassination of Dr. Martin Luther King, Jr, readers, viewers, and listeners have been reminded of the tumultuous year that was 1968. Many of the big cities in the United States reeled from days and weeks of riots but few were scarred the way Baltimore, MD. was. Like other other cities, industry and businesses moved away taking jobs that were the backbone of people trying to raise their standard of living.  While its closest neighbor. Washington D.C., bounced back after a decade or so, the Charm City has had a much slower recovery 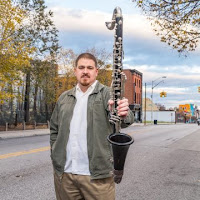 Todd Marcus, a native of Northern New Jersey, is both a musician (clarinet, bass clarinet) and community activist. He has lived in Baltimore, MD, in 1997, settling in or near the Sandtown-Winchester/Upton sections, learning about Black music and begin to serve the community through the Intersection of Change non-profit organization that, over the years, has created progress that serve battered women, offers arts and business classes plus created a farm that not only grows food for the community but offers employment to people returning from incarceration. 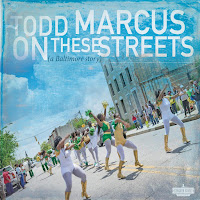 As a musician, Marcus has worked with Baltimore native Gary Bartz, pianist Orrin Evans, Bennie Maupin, and many others. As a leader, he has issued three albums, one with a nonet, another with two quartets, and the very impressive 2015's "Blues for Tahrir" with his Jazz Orchestra.  His latest disk, "On These Streets" (Stricker Street Records), is an expansive program (inspired by the progress that's been made in the communities after the shooting of Freddie Gray) that features interviews and commentary from the neighborhood where he works plus music played by a core group of George Colligan (piano), Kris Funn (bass), and Eric Kennedy (drums, vocal) plus guests Warren Wolf (vibraphone on 5 tracks, drums on one) and Paul Bollenbeck (electric guitar on four tracks).  The program is composed of all Marcus originals save for the gospel song "I Surrender All" (a late 19th Century hymn composed by Judson W. Van DeVenter with music by Winfield S. Weeden). That last track spotlights the soulful vocal of drummer Kennedy while Wolf moves to drums. 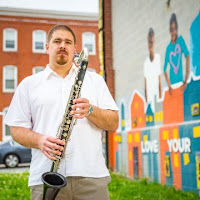 The majority of the music is up-tempo, celebrating the energy, the creativity, and the tension that infuses the streets where Marcus and his rhythm section live (Colligan was born in New Jersey but raised in Columbia, MD, while Bollenbeck's professional career received as boost when he moved to Washington, D.C.) The title track opens the album in a funky, mid-60s Herbie Hancock style - the leader, who plays bass clarinet throughout the album, takes the first solo ad the rhythm section takes its cue from him, pushing forward intently.  Collegian is the perfect partner on this project as he can add such powerful chords as well as create hard-edged solos. Wolf joins on "An Intersection of Change" and his voice blends nicely with the clarinet and piano. He's also can be heard on the lovely ballad "It Still Gets Still" where he supports the piano and adds meditative colors to the background plus takes a very melodic solo. Bollenbeck shines on "PTSD In The Hood", his soaring solo rising over the power supplied by the rhythm section (Kennedy's drums really spur the guitarist dig in).  Marcus's fiery solo over the rollicking drums and chords from the vibes, piano, and "wah-wah" guitar. 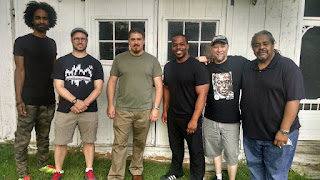 The last two tracks on the disk truly shine. "Covered In Snow" comes late in the program yet the attractive ballad has a fine melody plus excellent solos from Colligan and Marcus, - make sure to check the interactions between the leader and Wolf's vibes. The funky "NJ' 88", a tribute to Marcus's birth state, is a treat from start to finish. Fun, Marcus, Wolf, and Colligan solo with abandon while Kennedy keeps the groove going.

Perhaps the joy one hears throughout this album tells the listener that there is progress "On These Streets" of Baltimore. Though there is much work to do, Todd Marcus must have faith that what he and many other dedicated residents have contributed to bring a sense of security and renewed possibility to the hard-hit neighborhoods.  Listen to the voices, listen to the music, and look for hope and possibility. 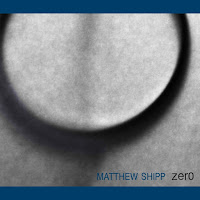 Pianist and composer Matthew Shipp is a fascinating conceptualist, creating music that touches on so much of the history of Twentieth and Twenty-First Century creative music.  On his new double-CD, "zerO" (ESP Disk), you can hear talk about his concepts, the weight that he gives as both a composer and musician to the concept of "zero", and much more.  As you sit listening to the 11 piano solos that make up "zer0", the music transports the listener beyond the "everyday" to a sound universe that combines thick rhythm lies with dancing solos, robust chords, and melodies that often have a circular feel. Of the eight (approximately) solo piano recordings Shipp has produced over the past 20+ years, this is definitely one of the best-sounding productions.

I do not plan to discuss specific tracks on this album.  Start at the first note and stay still after the final notes fall silent.  Shipp's rumination takes in the sound of the blues in is many-faceted state of grace yet does not seem rooted to an specific style or sound. His sense of dynamic variation and melodic phrases, his forward motion, the mix of chords and single-note lines pique the listeners interest so it would make sense to go back  and listen again. You'll pick out how the pianist shifts rhythms and makes complete statements out of fragmented phrases.

"zer0" is one more step forward for pianist Matthew Shipp. Yes, you can hear concepts that he has used throughout his career. His music does "speak truth to power" with the same urgency of fellow pianists Jason Moran and Vijay Iyer, not to afraid to "look back" constantly and infuse his music with the abundance of "voices" that preceded him: it's how he created his own "voice' and how he continues to grow as an artist and person.

For more inferno, go to www.matthewshipp.com. 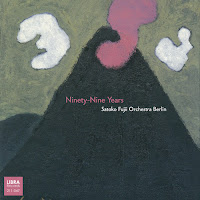 In her year of celebrating her 60th Birthday, Satoko Fujii is planning to release an album per month, with each disk featuring a different ensemble or a solo effort for the pianist-composer. "Ninety-Nine Years" (Libra Records) is the second album from her "Orchestra Berlin", a dectet (their debut featured 12 musicians) that blends three reeds (ten saxophonists Matthias Schubert and Gebhard Ullmann plus baritone saxophonist Paulina Owczarek), three trumpets (Richard Koch, Lina Allemano, and Natsuki Tamura), trombonist Matthias Muller, bassist Jan Roder, and two drummers (Michael Grenier and Peter Orins).  If you're a fan of Ms. Fujii's large ensemble music, you already know she likes to create different groupings within each song and that sounds and textures rule the music. 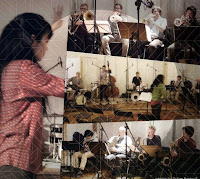 After a rousing opening song, "Unexpected Incidents" (which, after a long percussion intro, breaks into a rollicking, raucous, tune), the title track goes in several directions in its 13-minutes.  Opening with a slow yet powerful bass solo, the piece seems to open up and slow down at will with the baritone sax, basses, and percussion in the center of the music. There is a long saxophone solo (with only light percussion and high-pitched bowed bass underneath) that finally erupts into a powerful closing section, mournful but with a wailing tenor saxophone over the ensemble.  Dedicated to Ms. Fujii's mother-in-law (who passed just months before her 100th birthday), the piece is a combination of mourning and celebration.

Highlights abound. "On the Way" combines various drums interludes with a funky brass dominated melody before a hilarious trumpet solo (chattering, squalling).  The band returns, seemingly one-by-one, to a delirious, percussion-fueled (sounds very "second-line New Orleans) finish. "Oops"also has a bit of the "kitchen sink" approach, with ensemble melodies, a powerful sax solo that starts out unaccompanied and continues over a "slow drag" section, and hardy trumpet solo over just the bass and drums. That solo veers off into "free" territory before the dark ensemble melody returns.  The album closes with "Follow The Idea", yet another piece that goes in numerous directions: the proceedings sound improvised with all sorts of "strutting" from the reeds and brass amid the various "conversations."

"Ninety-Nine Years" is striking (no pun intended) music, surprising at times but never dull or filled with cliches. Satoko Fujii continues to create fascinating music, music that asks much of the musicians, challenges audiences, and is highly rewarding.