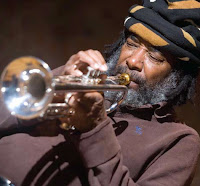 This coming Saturday and Sunday evenings (4/07 & 08/2018, Wadada Leo Smith presents the second annual CREATE Festival at Firehouse 12, 45 Crown Street in New Haven. If you went to the 2017 event (there were weekends in New Haven and San Francisco), you remember the range of music the 76-year old trumpeter, composer, conceptualist, and arranger can create.  The line-up and programs (listed below) for the 2018 Fest are just as impressive and wide-ranging with several debuts overt the course of two nights as well as an exhibit of Smith's unique scores. 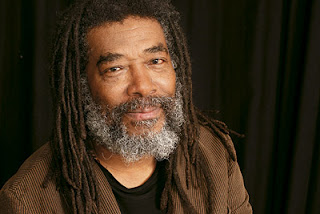 Legendary composer and trumpeter Wadada Leo Smith presents the Second Annual CREATE Festival in New Haven, CT, a two-day celebration and exploration of his inventive and unclassifiable music that will feature world or US premiere performances of four new suites. Taking place Saturday, April 7 and Sunday, April 8, 2018 at Firehouse 12, 45 Crown Street, New Haven, CT, the festival will include performances by five separate ensembles over two evenings and include an exhibit of Smith’s Ankhrasmation Symbolic Language Scores.  Performances take place at 7 p.m. each evening; exhibition walk-through on Sunday at 3 p.m. A full schedule of events is below. Tickets are $30 for each of the concerts; $55 for both.  There is no charge for the exhibit. For information, please call 203-785-0468 or go to http://firehouse12.com/. The festival debuted in April 2017 with a weekend of performances and discussions in New Haven, CT, where it will continue each year.  Create West followed at the Lab in San Francisco in December 2017.  This year’s edition will include two World and two U.S. premieres of suites penned by Smith, with inspiration culled from the natural world, the cosmos, politics and a much-needed plea for tolerance. These pieces add significantly to what Adam Shatz of the New York Review of Books calls, “one of the most innovative bodies of work in American music since the 1960s.” “This idea had been in a dream state for many, many years,” Smith says of the festivals. That long-cherished dream is being realized with support from the Doris Duke Charitable Foundation, which awarded Smith the Doris Duke Artist Award in 2016.  CREATE offers a thrilling, rare opportunity to delve deeply into the full scope of Smith’s sui generis compositional voice and approach, which – in their category-defying range and breadth – can only be classified using Smith’s preferred term, “Creative Music.” The weekend opens with an ensemble led by guitarist Lamar Smith (Wadada’s grandson), featuring electronic artist Hardedge and drummer Thurman Barker.  Saturday’s program continues with the world premiere of Dark Matter, Dark Energy: The Unseen Suite, a piece inspired by the great mysteries of the universe. The suite features Smith’s Kosmic Music Ensemble, in which Wadada’s trumpet is joined by vibraphonist Bobby Naughton, pianist Sylvie Courvoisier, guitarist Lamar Smith, drummer Thurman Barker, and Jawara on jimbe and percussion. The opening evening will conclude with Smith’s latest composition drawing on his love for America’s natural splendor, The Great Lakes. Following in the spirit of his widely-acclaimed America’s National Parks, Smith wrote the piece for his newly-assembled Great Lakes Quartet: himself, saxophonist Jonathan Haffner, bassist John Lindberg, and drummer Thurman Barker. Sunday’s line-up begins with the U.S. premiere of President Obama's Speech At The Selma Bridge, a suite written for the renowned power-jazz trio Harriet Tubman. Wadada will join the band, which includes bassist Melvin Gibbs (Rollins Band, Sonny Sharrock), guitarist Brandon Ross (Henry Threadgill, Cassandra Wilson), and drummer J.T. Lewis (Whitney Houston, Bill Laswell). The piece recalls Barack Obama’s historic speech commemorating the 50thanniversary of “Bloody Sunday” on the historic Edmund Pettus Bridge in Selma, Alabama in front of a crowd of 40,000. The ideals represented by that speech are also beautifully represented in the festival’s final piece, the world premiere of Peace, Love and Liberty: Compassion and Respect For a Tolerant World: A Suite. Performed by Smith’s longstanding Golden Quintet – Wadada, pianist Anthony Davis, cellist Ashley Walters, drummer Pheeroan akLaff, and video artist Jesse Gilbert – the new suite is the composer’s plea for understanding, compassion and tolerance at an incredibly divisive time. As President Obama’s Speech provides a poignant look back at another fraught chapter in our history, Peace, Love and Liberty offers an optimistic and embracing look forward. Both of Saturday’s premieres as well as the Golden Quintet performance will be supplemented by images provided by video artist Gilbert, who Smith says adds integral visual context to the aural elements. “The music and imagery don’t move in separate streams,” he says. “They’re actually intimately connected and responsible for each other, allowing us to create a narrative that transcends space and time. It’s twofold: there’s a technical and musical connection, and then there’s a psychological and historical connection that helps to provide for comprehension of the work.” In order to further that comprehension, the Festival will include an exhibition of 20 of Smith’s Ankhrasmation Symbolic Language Scores in a special gallery at Firehouse 12.  On Sunday, April 8, Smith will lead a walk-through of the exhibition along with curator Lyn Horton. He will also lead a discussion of his unique compositional approach. Curators and the general public are invited to join. “For all the minimalism of his sound,” writes Adam Shatz, “Smith has turned out to be a maximalist in his ambitions, evolving into one of our most powerful storytellers, an heir to American chroniclers like Charles Ives and Ornette Coleman.” That ambition will be on prismatic display throughout the CREATE Festival, allowing Smith to weave multiple tales across the sweeping breadth of his formidable imagination. 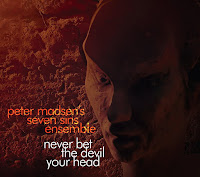 There was a time in the 1980s and 90s when I would come across pianist Peter Madsen performing with his good friend Michael Musillami (guitar) and bassist Mario Pavone (when he wasn't touring with Dave Leibman, Kenny Garrett, Fred Wesley, or Maceo Parker). One of the most dynamic and creative pianists around, Madsen moved to Austria around the turn of the 21st Century and, while he retains a residence in New York City, his most recent recordings feature his Collective of Improvising Artists (CIA) Seven Sins Ensemble, an octet that blends a string quartet, trumpet, piano, bass, and drums. The ensemble has just issued "Never Bet The Devil Your Head" (Playscape Recordings), 10 new pieces composed and arranged by Madsen inspired by the writings of Edgar Allan Poe. 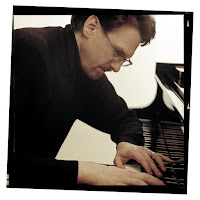 One might expect that music inspired by Poe might dark and foreboding but actually this music is often exciting, quite rhythmic, and filled with delightful twists-and-turns.  The program opens with "The Raven"; the first several minutes belong to the string quartet - violinists Aleksandra Lartseva and Monica Tarcsay, violist Simon Frick, and cellist Bianca Reisner - playing a handsome melody. Bassist Herwig Hammerl joins them on pizzicato then arco before drummer Martin Grabher kicks in a very rock-ish, raucous, beat.  Trumpeter Herbert Walser joins the string to state the melody. The piece moves forward on the power of the melody and the rhythm section with Madsen adding colorful piano.  "The Tell-Tale Heart" opens with drummer Grabher playing a "heart" beat before the cellist, bass, and pianist break into what one think is a Black Sabbath rhythm.  But the playful ensemble often sis into short reggae rhythms before returning to the original "thumping" chords.  In the middle of the song, everyone drops out and the string players do an odd dance, plucking and hitting their instrument with their bows while the drummer moves around his cymbals.  It's quite an atmospheric piece culminating in a Han Bennink-liek drum solo (meaning all over the kit, all at once) before coming to its close.

Other highlights include the Bertolt Brecht-style melody on "The Cask of Amontillado." Walter's muted trumpet solo blends Louis Armstrong with Lester Bowie, setting the inspiration for Madsen's powerful, swinging, and frenetic solo. The title track opens on a serious bowed bass solo - Hammerl is soon joined by the string quartet and they play a serious melody, dropping back as the trumpet enters.  The rhythm section joins, speeding up the piece for the trumpet melody and string counterpoint.  Madsen's solo builds on the tension that preceded his entrance and he kicks it u several notches yet it is easy ti hear how the solo is based in the original melody. 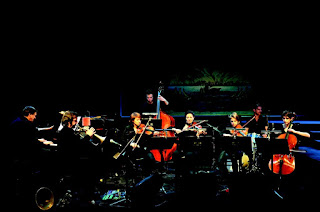 The closing two tracks, "The Masque of the Red Death" and "A Descent Into the Maelstrom", are both quite powerful.  The former enters on  strident strings over a funky drum beat.  When the rest of the group enters, the song turns into a macabre dance.  The interplay of the piano with the strings and trumpet is infectious and their "dance" continues under the powerful cello solo.
The latter piece roars its way in, the rapid-paced bowing of strings, the mighty piano chords, the "heavy" beat, all creating a sonic congestion.  The trumpet states the handsome melody before the piece falls apart and into silence.  Madsen leads the group back with chords that may remind some of vintage 1970 McCoy Tyner.  The leader then break into a unaccompanied shower of notes and, once again, the "heavy" beat returns, the swirling strings, the trumpet and piano stating the melody before the falls apart into silence.

For this listener, "Never Bet The Devil Your Head" is great fun and powerful music at the same time. Peter Madsen's Seven Sins Ensemble really dig into the pianist's music and his arrangements bring out the best (and, sometimes, strangest) in their sounds.  Delightfully melodic, quite rhythmic, and fairly adventurous, dive in and enjoy!

For more information, go to www.petermadsen.us.