The Life of Musicians & a Powerful Song

Saxophonist, composer, and educator David Bindman started his collegiate education at Wesleyan University in the early 1980s when Bill Barron, Bill Lowe, and Ed Blackwell were on the Music faculty  (in fact, Professor Barron was chair of the department from 1984-87). All three (and others) made a great impact on the young saxophonist.  After earning his Master's Degree in 1987, Bindman co-led the Brooklyn Sax Quartet with baritone saxophonist Fred Ho, worked in Blood Drum Spirit (a group formed by long-time associate, percussionist royal hartigan), and has taught at various schools in the New York City as well as Bennington College in Vermont.  In 2007, he created the David Bindman Sextet that features hartigan and fellow Wesleyan graduate Wes Brown (bass) plus Klezmatics-founder Frank London (trumpet, flugelhorn), Reut Regev (trombone), and Art Hirahara (piano). 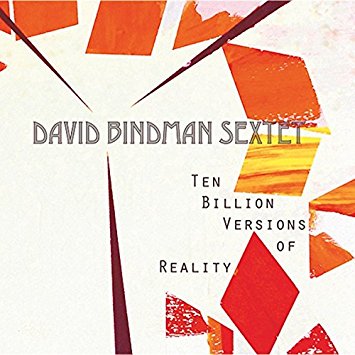 In the latter half of 2017, the Bindman Sextet issued its second album, "Ten Billions Versions of Reality" (self-released).  The group's 2012 debut, "Sunset Park Polyphony" (reviewed here), was a fascinating 2-CD set with several long suites. The new album has seven Bindman originals (composed and arranged as a suite)  that, not surprisingly, covers a lot of musical territory.  The opening track, "Sketch in 12", shows the influence of Charles Mingus in its opening melody plus the strong African drum tradition that the leader, bassist, and drummer played while at Wesleyan. hartigan and Brown lay down a powerful rhythm and it's exciting to hear how the front line comes together, splits into their individual solos, and comes together again.  London's crisp trumpet is a splendid foil to the bluesy trombone of Ms. Regev and the hearty tenor sax.  Hirahara's solo, with just the bass as counterpoint, goes" out for a moment before group interplay takes the piece to its conclusion.

Everyone's voice is important on this album.  From Brown's melodic bass solo on "Spring Song" to hartigan's powerful and masterful playing alongside the soloists and on his own on "Refuge" to the exciting polyrhythms of the title track over which Ms. Regev dances quite delightfully followed by a fiery piano solo, this music involves the listener.  The opening statement for the soprano sax and brass on "Ashgrove" hearkens back to Bindman's writing and arranging for the Brooklyn Sax Quartet.  After a moment, Hirahira becomes the fourth voice for the rest of the song, helping with the foundation but also serving as counterpoint. The short duo of soprano sax and piano stands out for how both Bindman and Hirahara move around each other in different moods yet finding common ground as they "speak".

The opening minute of "Through the Clouds" features just the tenor sax and brass but their melodic interplay sets the tone of the piece.  When the rhythm section enters, the music goes through many changes, changes of mood, tempo, yet the direction is always forward. The trombone solo is quite funky yet free and it's interesting how the bass, drums, and piano respond.  Hirahara's solo - sans rhythm section - starts out in a modern classical vein and then goes off in fascinating direction.  Brown and hartigan reenter and the pianist continues his journey.  Bindman's solo includes a three-way conversation with the bass and drums that is both contemplative and rollicking.

"Ten Billion Versions of Reality" is a mature statement from David Bindman. The music is thoughtful, thought-provoking, and displays how the composer-musician continues to grow.  The Sextet is the perfect vehicle for this music, six strong and individual voices, who put the music first.  Set yourself down and listen from beginning to end!

Passover starts this weekend and coincides with Easter.  One thinks of the journeys his grandparents took from Eastern Europe and the Soviet Union to land at Ellis Island. From the tenements of Brooklyn and New York City, the intrepid families moved to various parts of this country and became Americans. They overcame the stigmas of not knowing English and speaking with a thick accent but they persevered, built businesses, synagogues, churches, homes, schools, and families.  This writer has always been partial to Paul Simon and his "American Tune." Composed around the time that the country was truly tired of the seemingly endless Vietnam War, the years of Richard Nixon, and still reeling from the deaths of John F. Kennedy, the Reverend Martin Luther King, Jr, and Robert Kennedy and beginning to the toll that hard drugs was taking on the poorer segments of society, the song still has a message of hope, of discovery, of rebirth.  Kurt Elling has released a new album for Okeh Records, "The Questions", and it includes a lovely version of "American Tune." Take a look
and listen for yourself:
Posted by Richard B. Kamins at 5:52 PM