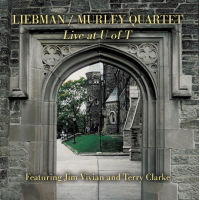 Perfect listening for a snowy March day in central Connecticut,
"Live at U of T" (UofT Jazz) is the second CD led by the saxophone duo of Dave Liebman (soprano, tenor, flute) and Mike Murley (tenor, soprano). The former has been on the faculty at the University of Toronto as a visiting artist/adjunct Professor since 2013 while the latter has been teaching there since 2011.  Joining them is bassist Jim Vivian (who has worked with both leaders in the past, especially with Murley for over three decades) and the veteran drummer Terry Clarke (John Handy, the Fifth Dimension, Rob McConnell Boss Brass).  The quartet sounds loose and limber, each musician playing with great fire and joy.

The program includes four compositions by Liebman, two by Murley, one by Vivian, Joe Lovano's "Blackwell's Message", and a smashing cover of Ziggy Elman's "And the Angels Sing" (which was first recorded by its composer as a Klezmer-style tune in the mid-1930s before he adapted it for the Benny Goodman Big Band and Johnny Mercer added lyrics).  The quartet swings the heck of the Elman, with the two tenors trading leads and and then "trading 4's".  The rhythm section really pushes the proceedings, something they do throughout the album.

Among the highlights is "Small One", a ballad/waltz composed by Liebman where both he and Murley play soprano sax.  Both create excellent solos over the easy-going rhythm section. Listen to how they intertwine the melody and harmony of the theme section.  The two sopranos play sans rhythm section on Liebman's "Missing Persons", a piece that has the feel of a modern classical composition (yet the timbre of the sopranos and direction of the music reminds this listener of the song "Fertility" from the "Buster Bee" album on Sackville by Julius Hemphill and Oliver Lake.)  There's a sense of the mysterious in Murley's "Open Spaces", starting with the flute sounds of Liebman.  When the tenor saxophones enter, one hears the influence of John Coltrane. 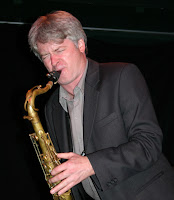 "Blackwell's Message", a piece that Joe Lovano wrote in tribute to drummer Ed Blackwell, opens with a delightful drum solo by Clarke. He then falls into a New Orleans "strut" over which the soprano and tenor saxes play the plaintive melody.  Dig how Vivian creates a drone then plays in and round the pedal point.  Both Liebman and Murley create powerful solos with the drummer pushing them forward with such glee.

"Live at U of T" is a treat for those listeners who like to listen "deeply" to music.  The Liebman/Murley Quartet plays with fire, grace, intelligence, a sense of the past and present of music, and with great joy.   You should listen.

For more information, go to mikemurley.com/2017/11/new-liebmanmurley-recording-now-available-on-itunes/. 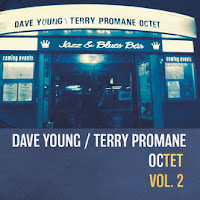 Mike Murley and Terry Clarke show up again as members of the Dave Young/Terry Promane Octet, the ensemble that has just issued "Octet: Vol. 2" on Modica Music.  Bassist Young is a veteran of the Toronto music scene, having worked in the early 1960s with guitarist Lenny Breau plus a 35 year association with pianist Oscar Peterson.  Trombonist Promane has played and taught in the Toronto scene as well (not as long as his partner), playing in pit bands for touring Broadway shows as well as with artists such as the late Kenny Wheeler, Rob McConnell, Mike Murley's Septet, and so many others. He's been on the faculty of the University of Toronto where he leads the Jazz 12Tet.  For this album, he's joined in the brass section with Kevin Turcotte (trumpet and flugelhorn) while tenor saxophonist Murley is surrounded by Vern Dorge (alto sax) and Perry White (baritone sax). Young and Clarke are the foundation of the Octet along with pianist Dave Restive.

Like "Vol. 1" (which was issued in late 2012), the new album features music from Charles Mingus ("Duke Ellington's Sound of Love") and Dizzy Gillespie ("Bebop") but there is only one original and that's Murley's "Can't You See" (the earlier album contained three tunes from Promane). This time around, the band plays music from Rodgers & Hammerstein II (the opening "O What a Beautiful Morning"), Cedar Walton (the closer "Hindsight"), Duke Pearson ("Jeannine"), Alec Wilder & Morty Palitz ("Moon and Sand"),  Jimmy McHugh & Dorothy Fields ("I Can't Give You Anything But Love"), Michel Legrand ("You Must Believe In Spring"), and Jimmy Frigo, Herb Ellis, and Lou Carter ("Detour Ahead").

With the leaders contributing four arrangements apiece, the music shows vitality, wit, and intelligence throughout. Those listeners who like swing will enjoy the rollicking "Bebop" (with a super solo from Turcotte) and the driving "Can't You See" (with its melodic bass solo and mellow trombone spotlight). Turcotte also romps through "Jeannine" as does White.

For this listener, it's the ballads that shine.  Young's arrangement of fellow bassist Mingus's "Duke Ellington's Sounds..." celebrates the song's handsome melody while featuring a heartfelt alto sax solo from Dorge.  Murley's tenor leads the way into and throughout most of "Detour Ahead" with the only other solo courtesy of the bassist.  Restivo dances through "You Must Believe In Spring" (a more uptempo take than usual) and "Hindsight", two medium tempo delights.

"Octet: Vol. 2" is good listening music.  The Dave Young/ Terry Promane Octet moves easily through this music, never taking anything for granted. This could easily be background music but the fine arrangements and strong solos holds one's attention throughout.

For more information, go to thejazzbox.ca/dave-young-terry-promane-octet/.