The Sounds of Freedom & Joy 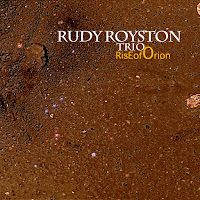 My ever-so-positive feelings about the musicianship of drummer and composer Rudy Royston are well-documented in these posts as well as in the "real world."  His work with the Dave Douglas Quintet, with saxophonist J.D. Allen, Rudresh Mahanthappa's Bird Calls, guitarist Bill Frisell, and so many others, has seen critics, reviewers, and audiences around the world singing his praises.

"RisE of Orion" (Greenleaf Music) is his second album as a leader; his debut, "303", featured his sextet plus second bassist Mimi Jones (his sister-in-law).  "...Orion" is a trio date recorded on Leap Day 2016 with Jon Irabagon (tenor and soprano saxophones) and Yasushi Nakamura (bass). The 13-song program (5 tracks are under two minutes, all but one fading in and out) covers plenty of territory.  The title track opens the album and might remind some of Sonny Rollins's "Freedom Suite", especially the more fiery sections.  The performance has such great forward motion, pulling the listener into its flow. 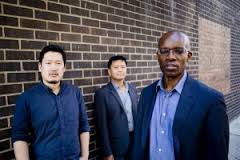 What power there is in this music and it's not just the thunderous material.  Dig the gentle sway of "Sister Mother Clara", Irabagon's thoughtful and impressionistic soprano sax leading the way; pay close attention to Nakamura's melodic bass work and splendid solo.  The bassist's stunning opening to "Make a Smile for Me" (composed by Bill Withers for his "+ Justments" Lp) on which he introduces the handsome melody stands out as does the soprano sax work.  The trio takes its time, getting deeply into the emotion of the ballad, caressing the melody, and allowing one to get lost in this most gentle piece.  More surprising is the take of "Dido's Lament", by 17th Century British composer Henry Purcell.  Reinterpreted as a blues ballad, Irabagon's shape-shifting soprano cries, wails, and shouts as Nakamura and Royston add fuel to his fire.

The soulful quality of "We Had It All" (the influence of Stax Records shines through the opening minutes of the track) features an incredibly powerful solo from Irabagon on tenor.  He also digs in on "Kolbe War" - the melody, inspired by Royston's son, isn't much but the trio plays with such fire that it's easy to enter the fray, paying attention to the protean work of the drummer, the fascinating dexterity and creativity of the bassist, all the while the tenor is flying all through the open sky created by the rhythm section.

The albums closes on "Belt", 57 seconds of improvisational fire that's not so much an afterthought as it is a reminder of how much fun the the trio is having, setting the stage for a follow-up.  The Rudy Royston Trio makes music that is playful, powerful, soulful, and great listening.  Add "RisE of Orion" to your collection and then go see the Trio live.  It just might change your life.

For more information and the drummer, go to www.rudyroyston.com.


Since this post goes live on Thanksgiving Day, I wish you all a wonderful day and a Great Holoday Season. May peace be with you wherever you may be or plan to go.