There seems to be a surplus of young bands playing fascinating music these days and nights. They have CDs and they're playing gigs in the area.  This Friday (11/11), Earprint, a quartet that came together several years while attending the New England Conservatory of Music in Boston, will play a concert for the Jazz at The Underbrook series sponsored by Saybrook College at Yale. The band (pictured above) has an energetic debut album issued several weeks ago on Endectomorph Music.  The self-titled recording features Kevin Sun (tenor sax, clarinet), Tree Palmedo (trumpet, ocean drum), Simón Willson (bass), and Dor Herskovits (drums).  It's the second debut recording this year for Sun and Willson as they are part of another quartet that records for Endectomorph, Great on Paper (review is here).  The earlier album features a pianist - here, the exciting work of Palmedo gives this album great depth and many colors. When he combines his sound with that of the tenor sax, whether in counterpoint (as on "Clock Gears") or in harmony ("School Days" is a good example).  And he fly over the solid rhythms of the bass and drums which he does with great panache on "Colonel.". His brash mute work on "Boardroom" makes an interesting partner to Sun's mellower clarinet.

The work of Willson and Herskovits sparkles on the majority of the 11 tracks.  The bassist creates excellent foundations and is also quite a melodic player.  Listen to him dance on ""School Days" and on the playful "Boardroom".  The Israeli-born drummer plays with great power as well as finesse. He helps create the mysterious air in "The Holy Quiet", Sun's musical reaction to the church shooting in Charleston, South Carolina.  The drummer contributed three songs, including the powerful closing track, "Six Nine", a piece that takes a number of twists and turns yet never loses its way. 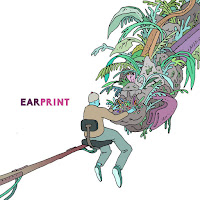 Sun, who wrote six of the songs, plays with grace and power often doing both on the same tune. The singing opening line of Palmedo's "The Golden Girder Strikes Again" gives way to a powerful beat and a funky melody.The trumpeter trades lines with the tenor with both pushing the piece forward alongside the rhythm section.  The airy tenor sax, somewhat like Paul Desmond, on "Malingerer", is an excellent companion to the explorations of the rhythm section.

What really stands out on this album is how melodic the band can be. These songs are not "jams" but pieces that were composed with the participants in mind, playing to each one's strengths while creating a group identity.  Earprint has vitality, a youthfulness that is refreshing; they also understand what creative music can do, where it can go when you take chances (like jazz players have been doing since the days of Buddy Bolden).  For more information, go to www.thekevinsun.com.

Jazz at The Underwood takes place in the Underwood Theater, 242 Elm Street, in New Haven.  The concert, which is free and open to the public, begins at 8 p.m. For more information, go to campus press.yale.edu/jazzcollective/.

Meanwhile, a few blocks away on Crown Street - 45, to be exact - the Fall Concert Series at Firehouse 12 welcomes Amirtha Kidambi's Elder Ones Quartet. Ms. Kidambi, a vocalist, composer, and harmonium player, has created music for this band - Brandon Lopez (bass), Matt Nelson (soprano saxophone), and Max Jaffe (drums) - that covers a great swath of musical territory. The Quartet is celebrating its debut album, "Holy Science" (Northern Spy Records) on the day of its release.  There is an experimental edge to the music, thanks to the blend of voice with the instruments and the active drumming, the pieces often go in unexpected directions. The music takes its time to unwind, the pieces usually stretching out beyond 10 minutes. The harmonium and bowed bass often create a drone to introduce a song while the drums and saxophone push the music out from its center.

To find out more about Ms. Kidambi, her band, plus her work with guitarist Mary Halvorson's Code Girl (alongside drummer Tomas Fujiwara, bassist Michael Formanek, and trumpeter Ambrose Akinmusire), go to www.amirthakidambi.com.

Here's a live version of a track from the debut album: