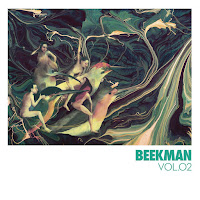 I cannot speak for all people who review music but there are days and nights one yearns to get lost in a recording; just let the music play, close your eyes, and enjoy the flow.  That's exactly how I felt the first few times listening to the new CD from the quartet known as Beekman.  "Vol. 02" (Ropeadope) is the ensemble's second (obviously) album, the first (yes, "Vol. 01") issued in early 2015 on the Chilean Discos Pendiente label.  Composed of Kyle Nasser (tenor and soprano saxophones), Pablo Menares (bass), Rodrigo Recabarren (drums), and Yago Vazquez (acoustic piano, Fender Rhodes), the band first came together in 2012 as all four were living in Brooklyn NY.  Each member is a busy side person but this ensemble gives them the opportunity to create new material.

Upon first examination, this music felt as if it was inspired by the airiness and adventurous explorations of Charles Lloyd, Wayne Shorter, and Guillermo Klein. There's no clutter here. Pieces such as the opening "Canción Al Licor De Ave" (composed by Recabarren) and Nasser's "Something Unsettled" glide and soar on the power of the drums and splendid foundation laid by the bass.  The latter track employs Vazquez's Rhodes for its blueprint with the drums dancing around the rhythm and the bass a solid bottom while the soprano sax reads the melody and rides the waves of cymbals.  Melody is so important to this music. The pianist's "Recovered" offers Nasser's soprano sax more room for an extended flight and he takes full advantage.  The conversational quality of the rhythm section support also gives Vazquez the chance to open up the melody and build a sparkling solo.  The solo piano opening of Menares's "En Otro Lugar" gives away to a lovely ballad, an emotionally strong melody line played by tenor saxophone (listen underneath to the playful percussion) - the composer gets to solo and shows his melodic chops (Menares often works with vocalists and it's obvious in his clear tones and intelligent counterpoint).

By the time you come to the close of the final track, Vazquez's lovely "Farewell" (the melody has the quality of a traditional Spanish folk song, the composer's homeland), the listener has been on a journey of great enjoyment.  Beekman is a talented quartet yet rarely if ever substitute technique for emotion or simple riffs for melody.  My recommendation is to play this album several times in a row, listen to the melodies or the rhythms, return for the solos and the brilliance of the rhythm section; notice the joy that an ensemble can create when they breathe as one and when all go in different directions and come back together without missing a beat or truncating a solo.  "Vol. 02" should lead back to find its classy predecessor and make you anxious to see this splendid ensemble live in concert.

For more information, go to beekmanmusic.com. 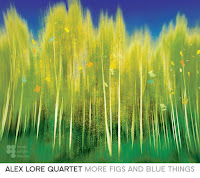 Saxophonist and composer Alex LoRe released his debut album in April of 2016. "Dream House" (Inner Circle Music) is a trio recording on which the alto saxophonist received solid support and a lot of coaxing and pushing from bassist Desmond White and drummer Colin Stranahan. Inner Circle is also the home of LoRe's second recording, "More Figs and Blue Things", the rhythm section is back and has been expanded with the addition of pianist Glenn Zaleski (who has been Stranahan's musical partner on numerous recordings and gigs.  The adventurous nature of the debut album is also in this new music, ten new compositions that not only show LoRe's growth as a player but also as a composer.

"More Figs..." displays the virtuosity of the musicians yet this is not a show of technical prowess but a delightful blend of melody, improvisation, and a willingness to take the music in unexpected directions. Check out Stranahan propels the opening track, "Southbound"; he's as melodic as the other instruments and so fiery supporting the soloists.  The leader's alto style leans more towards Lee Konitz than Charlie Parker but there is fire and passion in his solos that suggests Miguel Zenon.  Zaleski's lovely solo introduction to "Away" lasts two lovely minutes and he also has the main melody and first solo.  LoRe doesn't show up until three-and-a-half minutes in with a solo that is filled with true emotion.  There are several more ballads on the recording including the striking "No More Blue Skies."  Based on the composer's reaction to a 13-year old Pakistani boy whose grandmother was killed by a US drone strike.  The powerful melody line is underpinned by Stranahan's incredible drumming that moves from martial snare work to sparkling cymbals.  Trying to make sense of the senseless, knowing that words often fail at doing that, the music stuns one into silence. 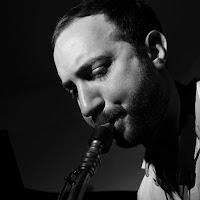 Among the unexpected directions this music takes is the short duo piece "Interlude."  Here, the leader is heard on xaphoon (a single reed woodwind instrument that sounds like a clarinet) supported only by White and the sounds of the woods near the Connecticut studio where the album was recorded.  That cut (64 seconds) leads into "Figs For Birds", the longest track (9:13) on the album.  A multi-sectioned piece, the songs features a long, winding, melody line played by alto sax and piano pushed forward by White's wonderfully melodic bass and Stranahan's exciting drums and cymbals.  LoRe and Zaleski carry on a conversation until the pianist steps out for a solo that includes an introspective soliloquy. When the rhythm section returns, the music follows the inward path the pianist had taken during his solo.

There are moments when the band on "More Figs and Blue Things" moves in ways similar to that of Keith Jarrett's European quartet (Jan Garbarek, Palle Danielsson, and Jon Christensen), especially on "Normal."  But, one can tell that this composer has different influences and a different agenda.  There are excellent solos throughout, this rhythm section has such freedom to explore its possibilities (listen to White and Stranahan during the sax and piano interchange on "Next Time"), and one can hear that everyone is totally committed to this music.  Judging by his excellent debut, I should not be surprised by how good this new album by the Alex LoRe Quartet is.  I am. This is better than good music; it's outstanding. Contemporary and timeless, "More Figs and Blue Things" will reward the curious listener many times over.

For more information, go to www.alexlore.com.

Here's the Quartet stretching out on "Cold Spring" from July of 2015: