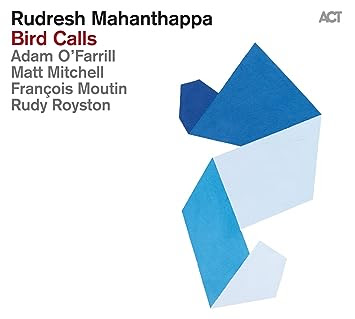 For his 8th recording as a leader, alto saxophonist and composer Rudresh Mahanthappa look back and forward at the same time.  "Bird Calls" (ACT Music) takes its musical cues from Charlie Parker (his daring playing, his willingness to experiment and his often dazzling technique) and adds the myriad influences the leader has encountered in the years since he first started playing.  The group Mahanthappa has assembled for this project plays with grace and fire; bassist François Moutin and drummer Rudy Royston are long-time acquaintances and musical cohorts while the saxophonist started playing with pianist Matt Mitchell 4 years ago (first as a member of guitarist Rez Abbasi's band, then with Mahanthappa and Bunky Green in the "Apex" band). The secret weapon in this ensemble is the 20-year old trumpeter Adam O'Farrill (son of pianist/bandleader Arturo O'Farrill) - his cool, confident, musicianship is a fine counterpoint to the fiery work of Mahanthappa. The music does not ignore the leader's Asian-Indian heritage - in fact, the opening track of the CD, "Bird Calls #1", serves as an overture and one can clearly hear echoes of the shehnai, the double-reed instrument in the music of India, Pakistan, Bangladesh and Iran.

Besides the 5 short "Bird Calls" (which, besides the group opener, include a sax-trumpet duet plus solo pieces for saxophone, bass and piano, each serving as a lead-in to a longer quintet piece), there are 8 pieces for the group.  Mahanthappa, who composed the entire program, claims to base each track off a Charlie Parker composition but I would not listen for direct parallels in the melody.  Instead, concentrate on the tremendous work of the rhythm section who are the engine of this music, check out Mitchell's splendid support and solos, and listen to how each melody creates a fertile garden for the soloists.  "On The DL" has the sound of a Mahavishnu Orchestra track (play it loud, you'll see), especially in the melody line, the leader's incendiary solo and Royston's poly-rhythythmic attack.  The trance-like quality of the pianist's lines lead to a stunning solo until the pace slows for O'Farrill's softer, more impressionistic spotlight.  His circular lines pick up in intensity and the rhythm section guides the band back in. The interaction of saxophone and trumpet on "Chillin'" has a folk-blues feel, especially in the call-and-response of the theme.  Mitchell's ringing chords, Moutin's throbbing bass and Royston's majestic drum work push the piece forward (there are moments when the chord pattern beneath the solos sounds like Weather Report's "Birdland.")

Mahanthappa's visceral solos, with his full yet sharp tone, often have a percussive feel (not unlike solos by his contemporary, Miguel Zenón) as if influenced by a tabla player's attack.  Still, on a ballad like "Sure Why Not", with its strong hint of the blues in the melody, he displays an emotional richness and sweeter tones.  The interaction of the trumpet and piano, echoing the saxophone lines in "Gopuram", is a pleasing touch while the intense rhythm section work during the solos serves as kindling for the improvisers.  The "funky bop" of "Maybe Later", which builds off of Royston's rousing drum work and utilizes Moutin's forceful bass lines as its foundation, is exhilarating.

"Bird Calls" starts out by making the listener sit up and listen with its powerful groove; even the final track, "Man, Thanks for Coming", puts one on the edge of his chair for 1:38.  Do not play this CD to relax but to set your mind on fire.  Rudresh Mahanthappa, who is known for his great musicianship and for getting the most out of his compositions and cohorts, has created what, arguably, may be his finest ensemble and music.  Catch them in person if you can - this music will rock your soul.  For more information, go to rudreshm.com.

Give a listen to "Chillin'" and dig the fire! Also, Rudresh Mahanthappa is the first guest on the newly-invigorated "The Jazz Session" - it's great to have Jason Crane back and you can hear the podcast by clicking on the link at the top right of this blog. Trombonist Marshall Gilkes, best known for his work with the Maria Schneider Orchestra and the Edmar Castaneda, has just issued his 4th CD as a leader and first with a large ensemble.  "Köln" (Alternate Side Records) is the culmination of his 4 years as a member of the WDR Big Band (Westdeutscher Rudfunk).  Based in Cologne, Germany, the 18-piece group works and records with many visiting artists as well as working with young people. Their discography includes collaborations with guitarist Hiram Bullock, vocalist Fay Classen, Maceo Parker, the New York Voices and many others.

The studio recording took place in January 2014. Gilkes's contract had expired the previous month but he had been invited back for a concert featuring his original works and an arrangement of Harold Arlen/Johnny Mercer's "My Shining Hour."  Appropriately, it's that tune which opens the program, a sprightly arrangement that features Gilkes as its only soloist.  He returns once again on the lovely performance of "Edenberry", a ballad that was the title cut of his 2005 debut album. The "Introduction" is an arrangement for brass chorale then Gilkes steps up to lead the entire band through a handsome reading of the piece. Again, he is the only soloist but the arrangement shows off his talent for creating compelling voices for the reeds and brass sections. Gilkes returns to solo on the final track, a smart new arrangement of "Downtime", a track that was a highlight of his 2012 "Sound Stories" recording.  It's fun to hear how the sections support and expand his melodic expedition.

Gilkes does not play on the rest of the tracks but creates impressive pieces that spotlight different members of the Big Band.  Pianist Frank Chastenier and the flugelhorn of John Marshall are featured on the prayer-like "Vespers" yet the section work also stands out.  "4711 Special" has a strong melody but builds smartly from the playful rhythm work of the pianist, bassist John Goldsby and drummer Hans Dekker. Pleasing solos by trombonist Ludwig Nuss and alto saxophonist Johan Hörlen add spice to the piece named for the famous Original Eau de Cologne from the region.  Goldsby is front-and-center on the bluesy (strong hints of Thad Jones in the melody) "Plant Bassed" that also features a stand-out trumpet solo by special guest and frequent collaborator Michael Rodriguez (who appeared on the trombonist's 2008 "Lost Words"). Rodriguez solos on flugelhorn on the lovely "Mary Louise", named for and dedicated to Gilkes' mother.  The brilliant sounds of the brass propel the melody to its soft finish, a short, sweet, second flugelhorn solo. "End in Sight", which also appeared on "Lost Words", is actually a piece from the composer's days at Juilliard  Here, it opens with the horn intro from the earlier recording but soon transform into an animated work where each section contributes to the brightness.  When the rhythm section kicks into a higher gear, the piece becomes a spotlight for an exciting alto saxophone solo from Karolina Strassmeyer followed by a vivacious turn from tenor saxophonist Paul Heller.

The old adage says there is usually "strength in numbers" and the wonderful section work on "Köln" bears witness to that.  This recording not only celebrates the music and arranging of Marshall Gilkes but also his relationship with the WDR Big Band.  There is a great amount of joy in this music, strong emotions abound, and the ensemble plays with gusto as well as sensitivity. Those who love 21st Century Big Band music will enjoy this gem of a recording. For more information, go to marshallgilkes.com.