The Northern tier of the United States (in particular the Northern 1/3rd) has had a colder and snowier beginning to 2015, meaning schools are closed once or twice a week, concerts and club dates are often postponed or cancelled, and one spends a great amount of time indoors.  Luckily for music lovers, the beginning to the New Year also a blizzard of new releases.  Over the next several posts, you will read and hear about a number of them,

Amy Cervini, Hilary Gardner, and Melissa Stylianou have a lot of common. They all hail from the northern climes (Ms. C. and Ms. S. from Toronto, Canada, while Ms. G. grew up in Wasilia, Alaska), they all moved to New York City (specifically, the borough of Brooklyn), they have lovely voices, and all record for Anzic Records (in fact, all 3 released excellent CDs in 2014). Somewhere along the line, someone or ones had the brilliant idea the 3 should blend their voices and Duchess was born.  Amy's husband Oded Lev-Ari, who has produced CDs for his wife and Melissa, brought them into the studio, added the talents of Matt Wilson (drums), Paul Sikivie (bass), Michael Cabe (piano), Jeff Lederer (tenor saxophone on 5 tracks) and Jesse Lewis (guitar in 4 tracks), and the result is 13 songs that will make you smile and/or tap your feet.

The 3 chanteuses acknowledge that the major influence for their repertoire is The Boswell Sisters, a vocal trio been and raised in New Orleans who came to fame in the 1930s.  Duchess pays tribute with a rousing rendition of "Heebie Jeebies", a Boyd Atkins the Boswells recorded in 1932. That's the final track - before that, they regale us with songs associated with Peggy Lee, Blossom Dearie, Doris Day, Billie Holiday, and others plus a New Orleans-inspired rendition of "Lollipop", a 1958 "smash for The Chordettes (this version includes splendid drumming from Mr. Wilson and a raucous sax solo.)

The program opens with 2 songs associated with Peggy Lee.  In fact, Ms. Lee wrote the lyrics to "Love Being Here With You", a  crowd-pleaser built off the swinging beat and the friendly banter of the vocalists. That's followed by Fred Fisher's "There Ain't No Sweet Man Worth The Salt of My Tears" (originally recorded in 1928 by Annette Henshaw with the Willard Robison Deep River  Orchestra and then the following year by Bix Beiderbecke with Bing Crosby on the vocal, no less) - Ms. Lee's version was recorded in 1963 and has a blues-rock feel.)  Duchess lean more towards a looser reading of the original. You'll enjoy the sweet love song penned by Ira and George Gershwin; titled "Blah, Blah, Blah" (no, not the Iggy Pop or Ke$ha songs), the lyrics show that sometimes it's easier to show love than to say "I love you." There are sweet ballads in the form of "Que Sera Sera" and "I'll Be Seeing You" plus an emotional take on "P.S. I Love You", the Johnny Mercer-Gordon Jenkins composition from 1934 with features close harmonies and a fine guitar solo from Lewis (an integral part of Ms. Cervini's Jazz Country group). A raucous tenor solo enlivens the playful "It's A Man", a Cy Coben composition recorded by his orchestra supporting the vocal of actress/singer Betty Hutton.

The singer each take the spotlight for one track.  Ms. Gardner swings her way through "My Brooklyn Love Song", a tune composed by George Tibbles and Ramey Idriss.  Ms. Cervini reprises "A Doodlin' Song" from her 2012 tribute to Blossom Dearie "Digging Me, Digging You", replacing the male voices with her sisters and Josh Sinton's baritone sax solo with a playful tenor sax hit from Mr. Lederer (otherwise, the arrangement is the same.)  Ms. Styling revisits "Hummin' to Myself" from 2014's "No Regrets" release and also does not change the earlier (right down to the bass solo) but spices it up with the addition of her friends' lovely harmonies.

Sassy, sweet, fun, playful, melodic, carefree and happy, all those positive adjectives (and more) should tell you that the trio known as Duchess have made a debut recording that should bring a smile to your face. Is it a bit "retro"?  Yes, but it's never "snarky", never patronizing.  Amy Cervini, Hilary Gardner and Melissa Stylianou plus their merry band sound like they are having a swell time - you will as well.  For more information, go to www.duchesstrio.com. 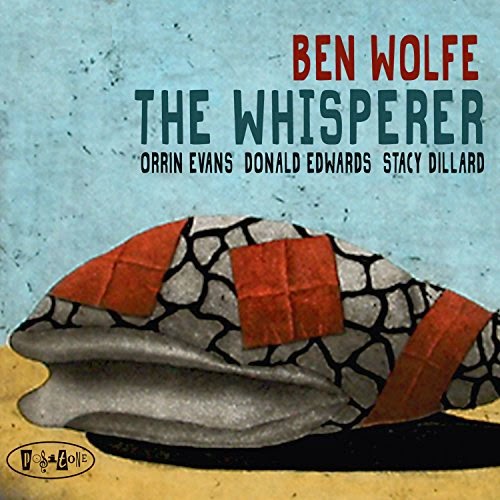 For his 2013 MaxJazz CD, "From Here I See", bassist and composer Ben Wolfe worked with a core quartet of Orrin Evans (piano), Donald Edwards (drums) and JD Allen (saxophone) plus guest artists and a string quartet. Messrs. Evans and Edwards return on his new release, "The Whisperer" (Posi-Tone Records) while Stacy Dillard (soprano and tenor saxophones) replaces Allen.  Trumpeter Josh Evans (no relation to the pianist) is the only guest and appears on 1 track. The unique painting on the cover is the work of Colorado-based Ron Fundingsland and is titled "Sanctuary."

Wolfe, who has worked with a slew of well-known artists ranging from Diana Krall to Wynton Marsalis to James Moody to Harry Connick Jr., clearly loves melody and writes pieces that have solid tunes yet leave space for solos. Only 2 of the 12 tracks are over 6 minutes and 5 are under 5 minutes.  The program opens with "Heroist", an up-tempo romp that starts with a McCoy Tyner-groove before galloping into the piano. Dillard flies over the opening groove on his soprano with Edwards urging him on.  The soprano takes the lead on "Hat In Hand", the first of several heartfelt ballads that are musically and emotionally satisfying.  "Love Is Near" is another, this time with Dillard on tenor saxophone, his breathy tone reminiscent of Ben Webster and Coleman Hawkins. Listen to how Wolfe makes each note count and Edwards barely brushing the snare and his cymbals as well as Evans's soft touch on the piano. Dillard returns to soprano for Jerome Kern's "All The Things You Are", the only piece not composed by the bassist.  The piano lines are so well-placed, with a blend of straight-forward phrases and "impressionistic" chords.  Josh Evans takes the place of Orrin Evans on the bopping "S.T.F.U", his exuberant playing pushing Dillard to a frisky soprano solo.

Edwards opens the longest track, "Chronos" (7:15) with a high-stepping drum solo before the band enters on a funky groove.  The piece is spiced by the various interactions, especially between Evans and Dillard (tenor) and then Dillard with Edwards.  The angular piano solo over Wolfe's rapid walking lines and Edwards' hop-scotch drums fills is a treat.  The drummer's cymbal work throughout the CD is perfectly captured by engineer Nick O'Toole, filling the sound spectrum with clicking sticks, the gentle touch on the ride and splash cymbals plus the occasional storms Edwards produces in support of the soloists.  He can sound so "free" at times; Wolfe's rock-solid foundation allows Edwards the opportunity to play (you can really hear him listening and reacting to the pianist and saxophonist.)

Ben Wolfe doesn't feel the need to solo on every track but he sets the table for bandmates to pay their best.  His mature compositions give "The Whisperer" a timeless quality; this is music that builds upon the sounds that Herbie Hancock, McCoy Tyner, Andrew Hill, Charles Mingus and Wayne Shorter discovered in the 1960s.  Mr. Wolfe and his cadre of excellent musicians do not copy any of those mentioned above, making his pieces sound fresh and alive.  For more information, go to www.posi-tone.com/whisperer/whisperer.html.

Here's the opening track of the album:

The news has been making the rounds the past 24-36 hours that Clark Terry has entered hospice care. Having just viewed "Keep On Keepin' On" and now in the midst of his autobiography (check it out here), one is amazed but not surprised at Mr. Terry's resilience through his many trials and tribulations.  Say a prayer for him, for his wonderful wife Gwen and his family.  Then, go to patrickwilliamsmusic.com/leaves-evergreen-clark-terry/ and over a listen to this music from composer Patrick Williams that features a short but sweet solo from CT.