Large Bands, Music of the Americas & The World

3 CDs in this review, all big bands (18 members each plus guests), each with a different take on a style of music that first came to prominence in the 1930s with ensembles led by Duke Ellington, Fletcher Henderson (who started in the 1920s) and Chick Webb.  Later in the decade and into the years of World War 2, Count Basie, Benny Goodman and Lionel Hampton expanded on the sound paving the way for Billy Eckstine, Woody Herman, Dizzy Gillespie and Gil Evans.  By the end of the 1960s, Evans, Gerry Mulligan, Bob Brookmeyer, Maynard Ferguson and, most certainly, Thad Jones, were changing the focus of big bands, inspiring people such as Maria Schneider, Ryan Truesdell, JC Sanford, John Hollenbeck and more.

Arturo O'Farrill (pictured left, piano, composer, arranger) first came to critical notice playing keyboard in Carla Bley's Big Band from 1979-83. After a decade+ working with artists such as Mr. Gillespie, Lester Bowie, Harry Belafonte and Wynton Marsalis, he assumed the directorship of the Chico O'Farrill Afro-Cuban Jazz Big Band/Orchestra in 1997, several years before his father's passing.  After a 15-year run of Sunday nights at The Birdland in New York City, that band was subsumed into the Afro Latin Jazz Orchestra, an organization that not only continued to play the music of great Latin composers (O'Farrill the father, Machito, Hermeto Pascoal, Astor Piazzolla and others) while commissioning works and/or arrangements from contemporary composers such as Gabriel Alegria, Miguel Zenon, Michele Rosewoman, Vijay Iyer, Jason Lindner, Edmar Castaneda and more. From 2002-07, the Orchestra was one of the resident ensembles at Jazz at Lincoln Center - after parting ways, Arturo O'Farrill and others created the Afro Latin Jazz Alliance to help bring the music to a wider audience and have created educational programs for young performers. The 2014 edition of the ALJO features several members of the Father's Big Band, including Jim Seeley (trumpet), Peter Brainin (tenor saxophone), and Joe Gonzalez (bongos, bell).

The ALJO's 3rd release, 2011's "40 Acres and a Burro" (Zoho Music) was a delightful recording (reviewed here), mixing danceable rhythms with more than a dollop of social commentary and sparkling solos. The new CD, "The Offense of the Drum",  is the band's first for Motema Music, continuing in the groove and direction of its predecessor.  Original pieces by Vijay Iyer, Edmar Castaneda, Jason Lindner/"Chilo" Cajigas and Arturo O'Farrill are blended with fascinating new arrangements of Erik Satie's "Gnossienne 3 (Tientos)" (arranged and conducted by Miguel Blanco) as well as rousing take of the New Orleans classic "Iko Iko" (arranged by Todd Bashore, featuring the vocals and alto saxophone of Big Chief Donald Harrison).

The "Chilo"/Lindner collaboration, "They Came", tells the story of the Puerto Rican immigration to the United States.  Poet/Spoken word artist Cajiga pulls no punches talking of the accomplishments and the struggles of his ancestors while Lindner's arrangement blends funk, hip hop, the active turntable work of DJ Logic, sweeping brass and reeds framing the words.  History in music and the music of history is energetic, invigorating for the spirit and heart.

Iyer's "The Mad Hatter" is dedicated to Arturo O'Farrill with music that fuses the myriad styles the AFLO leader brings to his music. The piece builds slowly, voices adding every 8 bars, rhythms changing and shifting throughout, all leading to a blustery, visceral, trumpet solo from Seneca Black followed by the composer's rousing spotlight.  Listen to how the brass and reeds frame the solos while the percussion dances below.

The title track, the longest piece at 11:41, is a 2-part tribute to the drum and its role in communication and community over the centuries.  Composed by O'Farrill, the music goes in many directions, often guided by the active percussion of Gonzalez, Roland Guerrero (congas), Vince Cherico (drum set) plus guests Ayanda Clarke (djembe) and Hiro Kurashima (taiko drum).  Solos from guest Chad Leftkowitz-Brown (tenor saxophone), the composer, and the rhythm-makers are celebratory and quite exciting.

There is not a weak track throughout the 74-minute plus "The Offense of the Drum"; there are memorable melodies, splendid arrangements, smart interactions, a plethora of strong solos and, yes, the drum.  Not just Caribbean and Cuban, but Brazilian and even the Colombian marching drums (on the delightful "Mercado En Domingo", composed and conducted by Pablo Mayor, leader of Folklore Urbano) make this recording a joy to listen to.  The Afro Latin Jazz Orchestra wants you to learn, to dance and to understand music does make the world a better place.  To find out more about Arturo O'Farrill and his wonderful Orchestra, go to www.afrolatinjazz.org.

Pianist, composer and arranger Alan Broadbent first came to the United States from his home in Aukland, New Zealand in 1966 to study at The Berklee College of Music in Boston, MA.  By 1969, he was the pianist/arranger for the Woody Herman Band. He decided to stay in Los Angeles, CA, join to work with vocalist Irene Kral, Nelson Riddle and David Rose.  Broadbent has worked with Natalie Cole (on her "Unforgettable" CD and subsequent tours) and was member of Charlie Haden's Quartet West.  He has arranged for vocalist Shirley Horn and Diana Krall as well as Sir Paul McCartney (for his "Kisses on the Bottom" project.)

Though he has shied away from Big Band work for the past several decades, Broadbent received a commission from the NDR Big Band (Hamburg, Germany) and proceeded to create the 9 tracks that make up "America The Beautiful", the splendid CD from Jan Matthies Records.  Over the course of 9 tracks (73:49), Broadbent revisits and rearranges compositions from throughout his career as well as adding a special touch to the title track (a tribute to the country he writes "gave me a life in music and I give thanks to it every day.") His "Sonata to Swee' Pea" is dedicated to one of Broadbent's biggest influences, Billy Strayhorn. One can hear throughout the program that influence in that Broadbent emphasizes melody and harmony over dynamic rhythmic changes.  He certainly likes to "swing" as demonstrated on "Sonny's Step" composed in honor of pianist Sonny Clarke (1931-1963) where the NDR sections gets to "strut its stuff" along with strong solos.

The handsome ballad "The Long White Cloud" pays tribute to his native land, its title derived from the Maori People's name for New Zealand (Aotearoa translates to "the land of the long white cloud").  The piece builds slowly, from the piano melody (over a rhythm section that suggests the influence of Herbie Hancock) to the sectional responses that turn into the melody lines, all leading to a forceful solo from tenor saxophonist Christof Lauer.  The track that follows, "Love In Silent Amber", was composed during his Woody Herman days and also features a strong melody line, an un-rushed rhythm and the pretty interjections of the brass and reeds.

The title track is a splendid re-contruction and re-imagining of church organist Samuel Ward's melody, originally composed in 1882 to accompany a church hymn. Here, Broadbent hints at the melody early in the arrangement, choosing to use a rhythm that suggests South America to underpin the various melodic fragments he inserts until the original melody rises out of the flutes, precipitating a martial beat that then supports a slow, respectful, recitation of the melody from the brass and reeds - the short coda that follows is the "fireworks" one hopes for on July 4th.

"America The Beautiful" celebrates the music of Alan Broadbent as much as it honors the music that brought him to the USA nearly 5 decades ago.  Blessed with the cooperation of a top-notch band, the composer/arranger creates a program that emphasizes both his strengths and the musicians working with him.   Despite the many years Broadbent has shunned writing for a large ensemble, he is in top form on this excellent new CD. And, his piano work is splendid throughout.  For more information, go to www.alanbroadbent.com or janmatthies.com/blog/en/. 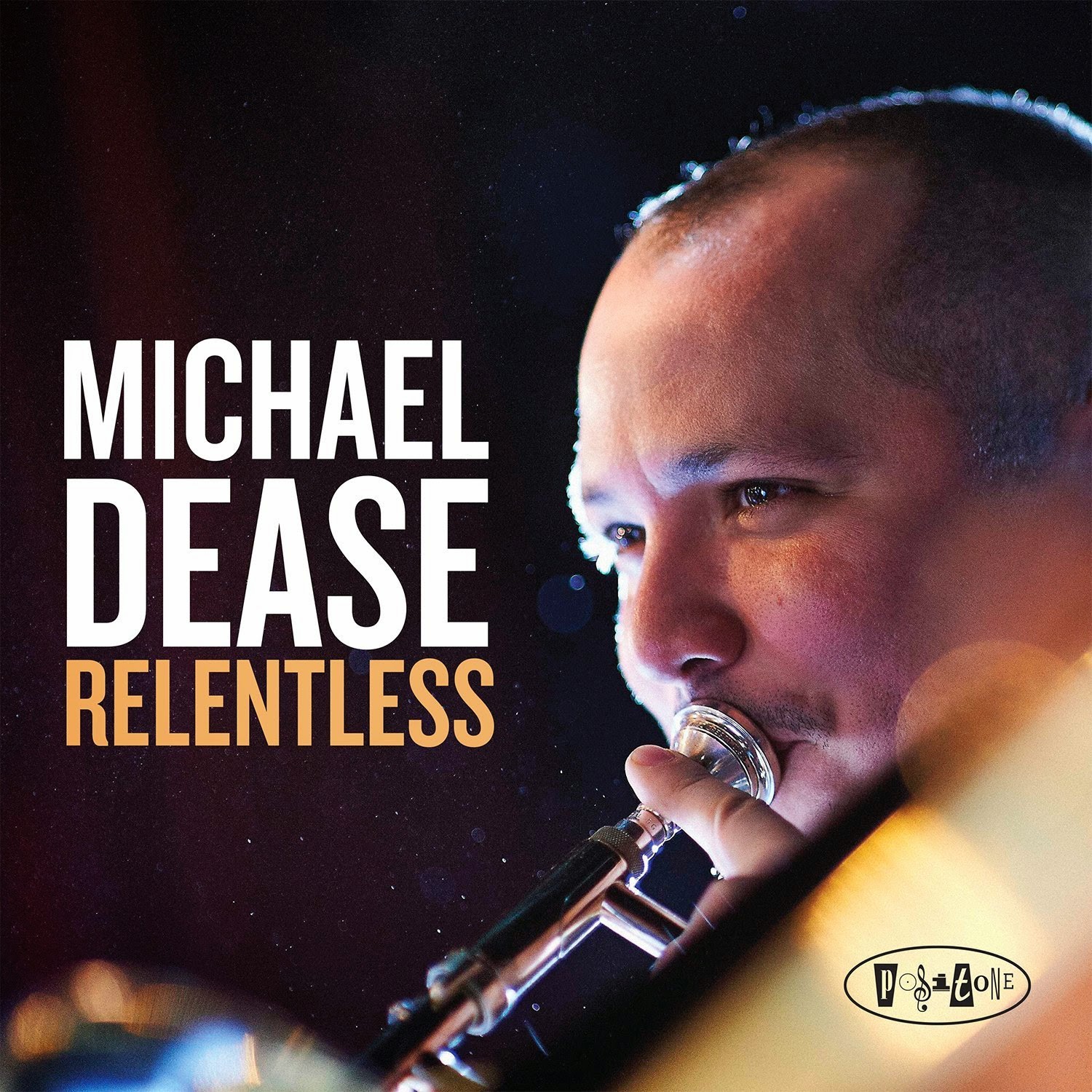 Georgia native Michael Dease is a multi-instrumentalist known mostly for his work on trombone but is also proficient on trumpet and saxophone.  He has established himself as a producer and sideman, appearing on dozens of recordings and gigs ranging from Alicia Keys to Illinois Jacquet's Big Band to Neil Diamond to Maceo Parker.  There are a number of good reasons he's such a popular musician - he can play any and everything plus he knows his musical history.

"Relentless" (Posi-Tone Records) is his 6th release as a leader and first in front of a large ensemble. He has stocked the band with excellent players including saxophonists Tim Green, Todd Bashore and Diego Rivera, a trumpet section led by Seneca Black, Greg Gisbert and Etienne Charles and fellow 'bone players such as Tom Malone and Jeff Nelson.  The first-class rhythm section features Miki Hayama (piano), Linda Oh (bass) and Ulysses Owens Jr (drums).  Wycliffe Gordon makes 2 appearances on the program, joining the trombones for the slinky reading of "Autumn Leaves" (nice marimba work from Gwendolyn Burgett) and switching to slide trumpet for "Two Bass Hit."  On the latter track, Gordon, Dease and trumpeter Benny Benack III engage in some sprightly scat work while, on the former, there are a slew of short but strong solo before the leader sings a verse before the song closes out by returning to its opening "groove."

Then, there's "Webster Grooves", an uptempo Dease original (4 of the 10 tracks are penned by the leader) with the feel of a blues shuffle (a la Bill Doggett's "Honky Tonk") that morphs into a "swinging" piece with excellent section writing and more short but hardy solos.  Ms. Oh, who is rarely heard on record in a big-band setting, locks in with drummer Owens, keeping the band on an even keel.  The title track lives up to its name, pushed mightily by the fine work of Owens and the smart work of the reeds and brass. "The Takeover" takes off on the strength of Ms. Hayama's piano work but hits its stride when the sections play off each other, all of which leads to a fiery solo from Bashore plus a friendly "give-and-take" from trombonists Malone and Jerrick Matthews before Charles and Ms. Hayama take turns flying over the bass & drums.

Other highlights include a lovely reading of Jimmy Dorsey's "I'm Glad There Is You", a ballad that gives Dease the spotlight as both a soloist and arranger.  His dramatic arrangement for the bridge section is forceful.  Guitarist Andrew Swift electrifies the band on its heavy funk reading of "Roppongi", a tune Randy Brecker composed for the Brecker Brothers Band.  Ms. Oh's electric bass anchors the piece while Owens Jr's drums propels the funk forward.  Eric Alexander's "Little Lucas" is a medium-tempo ballad that opens with more fine work from Ms. Hayama before Dease gives the melody and harmonies to the sections.  Tim Green's alto solo has a bit of a rambunctious edge, setting the stage for a strong solo turn from the leader.

Michael Dease understands the power of a big band and, to his credit (and our pleasure), these songs are filled with excellent section writing.  There are certainly plenty of fine solos but what stands out on each subsequent listen are the strong arrangements and first-class work of the rhythm section. Both recording engineer John Davis (Bunker Studio in Brooklyn, NY) and mixing/mastering engineer Nick O'Toole (Woodland Studio, Lake Oswego, OR) make sure we hear all the musicians, especially the superior efforts of Ms. Oh, Ms, Hayama and Mr. Owens Jr.  "Relentless" is the proper name for this appealing CD and it's well-worth exploring.  For more information, go to www.michaeldease.com or www.posi-tone.com/relentless/relentless.html.
Posted by Richard B. Kamins at 5:27 PM