Live This Week in CT 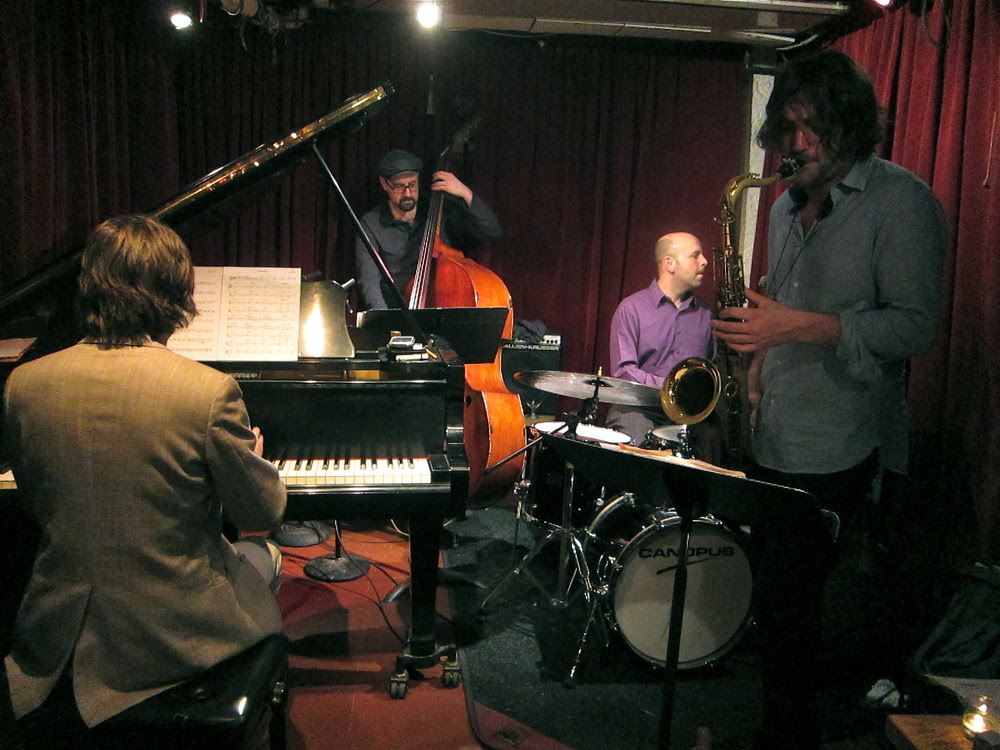 Busy of week of in the Nutmeg State starting this Thursday July 10 with the Rob Garcia 4 at The Side Door Jazz Club in Old Lyme. Drummer, composer and arranger Garcia stays busy with numerous projects but the RG4 is his "baby."  He formed the ensemble in 2009 with Noah Preminger (tenor saxophone), Dan Tepfer (piano) and a rotating lineup of bassists including John Hebert, Chris Lightcap and the current favorite, Joe Martin.  That lineup has just issued its new CD, "The Passion of Color" (BJU Records) and the show at The Side Door will serve as the CT CD Release Party.  Expect that the 2 sets (the first one commences at 8:30 p.m.) will feature material from all 3 of the RG4's recordings.  For ticket information, call 860-434-0886 or go to thesidedoorjazz.com.

To find out more about Mr. Garcia and the band, go to www.robgarcia.com.

Bassist and educator David Chevan is and about this week, playing 2 gigs with his group, Bassology.  Built around the drums and vocals of Ron Braggs, this trio version of the ensemble also features saxophonist Will Cleary.  They'll be playing their infectious blend of jazz, funk, pop music and more on Thursday at 7 p.m. at The 9th Note, 56 Orange Street in New Haven (with later sets at 8:30 and 10 p.m.) as well as Saturday July 12 at 9 p.m. in the Park Central Tavern, 1640 Whitney Avenue in Hamden.   Click on the venue names for more information.

On Friday night, The UMOJA Music Series presents the 3rd of 4 free concerts, this one featuring Rene McLean & The Cosmic Brotherhood at 6 p.m. Mr. McLean (pictured left), the son of the late saxophonist/educator Jackie McLean, was born in New York City in 1946 and learned his craft at the feet of his father as well as attending both NYU and the University of Massachusetts.  He has performed in venues around the world, first as a co-leader of his father's group and, even before the elder McLean passed in 2006, a leader of his own groups.  He has also taught in schools and universities in the United States and South Africa. Rene McLean is a "Senior Artist Teacher"  on the faculty of the Jackie McLean Institute at the University of Hartford.

Joining for this concert, which takes place in The Pump House Gallery in Bushnell Park (60 Elm Street in Hartford), will be Nat Reeves (bass), Alan Palmer (keyboards), Ronnie Burrage (drums) and Neil Clarke (percussion).  Opening the show will be vocalist Shenel Johns and her Quartet.  Rain location is the Greater Hartford Academy of The Arts, 15 Vernon Street, in the Capital City.  For more information, go to umojamusic.com.

The Monday Night Jazz Series in Bushnell Park has resumed and this coming Monday (7/14) presents the Marc Cary Focus Trio.  Pianist/composer Cary was born in Washington D.C. but grew up in New York City.  Since emerging on the scene in 1988, Cary has worked with many artists, from Max Roach to Shirley Horn to drummer Arthur Taylor, and spent 12 years (1994 - 2005) working with vocalist  Abbey Lincoln.  In fact, one of the 2 CDs Cary released in 2013 was dedicated to his mentor (the lovely solo recording "For the Love of Abbey" on Motema Music).

His Trio features drummer/percussionist Sameer Gupta and bassist Rahsaan Carter.  Their music, documented on the other 2013 Motema release "Four Directions",  sparkles with creativity and splendid interactions.  At times, it's downright funky.  Opening the show at 6 p.m. will be the Peter Greenfogel Quintet. In case of rain, the event moves indoors to the Asylum Hill Congregational Church, 814 Asylum Avenue.  These concerts, arranged and sponsored by the Hartford Jazz Society, are free and open to the public. For more information, go to hartfordmondaynightjazz.com. If you don't wish to venture out of your house, the concert is carried live on WWUH-91.3FM (online at www.wwuh.org.)