When I first discovered the recordings of drummer Shelly Manne, the scope and breadth of the music was quite impressive. Tucked away in his discography on Contemporary Records with his group, "The Men", is "Volume 6" featuring an expanded group (10 musicians) performing "Concerto for Clarinet and Combo." Composed by clarinetist Bill Smith, the music mines the rich veins of jazz, blues and classical music.  Smith, born in Sacramento, California, in 1926, studied at Mills College, University of California/Berkeley and the Juilliard School, has spent much of career teaching at the University of Washington but did perform and record with pianist Dave Brubeck off and on for several decades.

To make his discovery of Smith's music come full circle, McGinnis composed "Road*Trip For Clarinet & 9 Players" - in the liner notes, the composer notes the influence of Smith's composition as well as his work with Anthony Braxon on his visionary "Trillium E" opera. One can hear how McGinnis's work updates the ideas behind the "Concerto", how it gives more space and importance to the rhythm section (Sperrazza's work is exemplary) and this composer's voicings make the band musch larger than 10 pieces.

The best way to listen to "Road*Trip" is to first concentrate on the fascinating arrangements, then the rhythm section and finally to revel in the luxurious solo work of Mike McGinnis.  As a closing treat, "Road*Trip III: Up and Out" features short solos by the entire ensemble plus a brilliant call-and-response for clarinet and 9 players.  It's a wonderful way to complete a "wonder-filled" trip!  For more information, go to www.mikemcginnis.com. 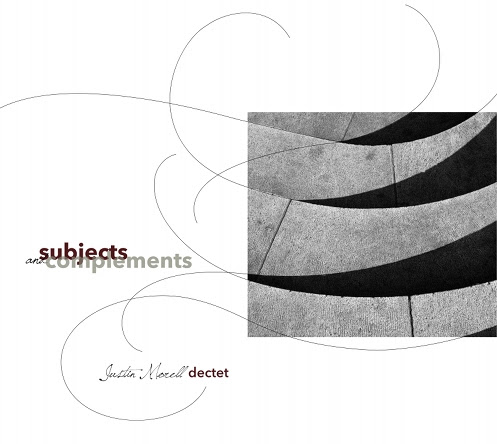 The 12-song program opens with the longest track (nearly 11 minutes), "Noun Ember", a finely constructed piece that has well-defined sections, an active arrangement and several smart solos.  Morell follows that expansive work with the first of 5 fugues that are spread across the program. "Fugue in B, in three voices"; this uncluttered work truly illustrates what a fugue is, in many ways related to the call-and-response of blues and jazz but with the added element of a third "voice" playing "counterpoint" to the original melody (read a good definition here).  Morell's "Fugue in B-flat, in three voices" is set to an infectious and often beat while "Fugue in E-flat, in five voices" opens with Mark Ferber's drums as the first "voice" and the rest of the instruments build from his part. "Fugue in E, in three voices" has the feel of progressive rock while "Fugue in C, in 3 voices" reminds this listener of a work by Erik Satie with its gentle melody lines.

Other highlights include the sweet blues/pop feel of "O", Morell's handsome guitar leading the way.  "The Straight Man" has a melody line reminiscent of "With a Little Help From My Friends" but has its roots firmly in the blues.  The sauntering rhythms support short yet sparkling solos from Wendel and Sheppard but the composer takes his time getting there, allowing for a long introduction and smart counterpoint.  The electric bass work of Damian Erskine (the nephew of drummer Peter Erskine) is exemplary throughout; whether he's holding down the bottom or playing counterpoint, his warm tones and rich melodic phrases are a delight. Having Ferber as a partner allows plenty of room move about as the drummer is ever-so-solid. There's a touch of Bob Brookmeyer in the melody and arrangement of "Sun Subtle"; one can hear in the "open spaces" of the horn voicings and the loping rhythm section (excellent piano work from Thompson.)

"Subjects and Complements" was issued in November of this year and the music has posited itself in my ears ever since.  The subtlety of the arrangements, the mature melodies, and the seemingly ego-less playing of the Dectet make this a joyous listen.  Justin Morell is a voice and musician who gives one much for the future of creative music and this CD is well worth exploring time and again.  For more information, go to justinmorell.com.

Received a complimentary note plus CD from Paris-based composer/ vocalist Loïs Le Van, "The Other Side" (Hevhetia) a few weeks after Thanksgiving. Turns out M. Levan is an up-and-coming star on the European jazz scene, a vocalist who has studied with Roger Letson and David Linx, taken "Master Classes" with people such as Kurt Elling and saxophonist Mark Turner, and won the 2012 "Voicingers" contest held in Poland.  Levan is a member of the a cappella sextet Ego-System, leads duos with guitarist Aliocha Thevenet and pianist Sandrine Marchetti plus sings with Belgian jazz/rock group Canopee.

"The Other Side" is his debut as a leader, fronting a Sextet that features Ms. Marchetti, Thomas Mayade (trumpet, flugelhorn), Manu Domergue (mellophone, french horn) and the splendid rhythm section of Leila Renault (double bass) and Roland Merlinc (drums). Levan composed 8 of the 11 tracks, all but 1 set to the lyrics of poet/songwriter Francois Vaiana.  The remaining songs "Old and Wise" (originally recorded in 1982 by the Alan Parsons Project) plus Tord Gustavsen's "Home" and Wayne Shorter's "Ana Maria", both with lyrics by Vaiana.  M. Levan sings in English throughout and there is a vulnerability when he inhabits the lyrics of "Prophets and Sons" - "One day I'll have a son and he will be the unknown soldier,/ that's what the elder said,/he'll be forgotten" shadowed by Ms. Marchetti's piano and the quiet bass of Ms. Renault.  A long unaccompanied piano solo leads the listener into "Happenings Before Dawn", its impressionistic lyrics painting a picture of restless youth wandering the streets.  There's a palpable shock when the sextet enters for the bridge.  M. Merlinc's active percussion dances below the band then pushes and pokes at the brass during the short solo introduction to the title track.  One hears the influence of Kenny Wheeler coursing through a number of the pieces (and not just during the times when the horns are playing.)  Laura Karst's lyrics for "Venture" retell the Greek myth of Daedalus and his son Icarus make their escape by attempting to fly away above their captors. (Ms. Karst must have been introduced to M. Levan by Roger Letson, as they both were his students in California.)  Here, the floating feel of the chords and impressive flugelhorn solo is an excellent match for the vocal (meanwhile, the drums are exploding like fireworks beneath.)

The CD closes with "Are We The Unknown (Ana Maria)", opening with mesmerizing piano and lyrical french horn, before the vocal enters. The beautiful melody, composed by Mr. Shorter for his "Native Dancer" Lp", here retains its Brazilian roots but M. Vaiana's lyrics and Ms. Marchetti's arrangement inject a touch of melancholy.

"The Other Side" serves as a fine introduction to the work and generous spirit of Loïs Le Van.  While the CD is not scheduled for release until well into 2014, be on the lookout for it as, hopefully, you'll be as moved by the music the way that I am.  To find out more, go to www.loislevan.com/english/.
Posted by Richard B. Kamins at 11:32 AM