Gus Wildi, an enterprising Swiss-born jazz lover, started Bethlehem Records in 1953 and, over the course of 9 years (through 1962) released many Lps by jazz newcomers and jazz greats.  After selling the rights to King Records, the recordings stopped coming and the music became a "hit-or-miss" situation for music lovers.

Now, Verse Music Group and Naxos of America are combining to re-issue the label's music in digital, CD and vinyl formats.  The initial 6 CDs came in early September with 3 more in the coming weeks and 6 more after New Year's Day. 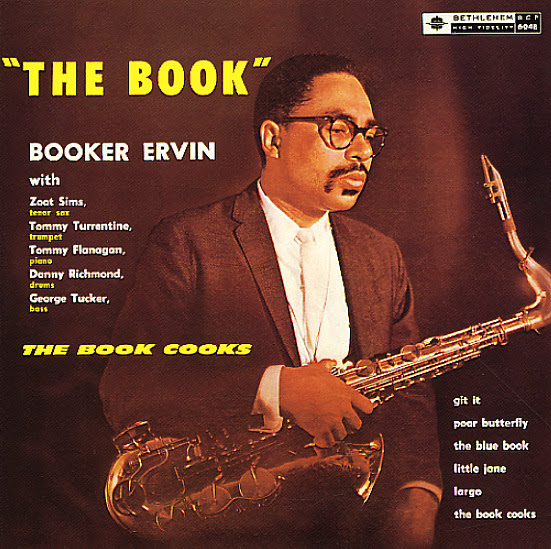 Among those first reissues is "The Book Cooks" from the Texas tenor saxophonist Booker Ervin (1931-1970). After a stint in the US Army, Ervin traveled around the country until pianist Horace Parlan convinced him to come to New York City.  Within months, he was touring and recording with bassist/composer Charles Mingus.  He recorded his debut Lp in April 1960 with a sextet featuring fellow tenor player Zoot Sims, Tommy Turrentine (trumpet), Tommy Flanagan (piano), the dependable bassist George Tucker and long-time Mingus associate Danny Richmond (drums).  The music is infused with the blues - Ervin was quite the blues player - and everyone is in the groove.  The front line gives a "little big band" feels to the proceedings, solos are, for the most part, short.  The title track stretches to nearly 11 minutes and contains the most fiery playing on the session.  The rhythm section does its share of "cooking" and provides a strong cushion for the soloists.  The dialogue between Ervin and Sims bubbles over with excitement.

Booker Ervin would go on to cut a series of strong recordings for Don Schlitten at Prestige Records that featured the great section of Jaki Byard (piano), Richard Davis (bass) and Alan Dawson (drums).  He finished his career at Pacific Jazz and Blue Note Records before succumbing to liver disease in 1970.  Listening to his debut, one can hear a style fully formed that he would maintain throughout his career. 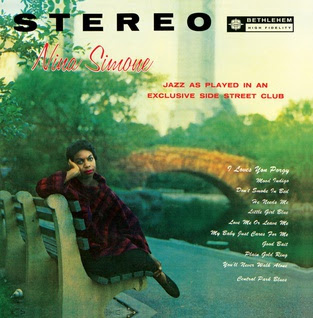 As debut recordings go, Nina Simone's "Little Girl Blue" (the original title was "Jazz as Played in An Exclusive Side Street Club") is nigh-on perfect.  Joined on most tracks by bassist Jimmy Bond and drummer Al Heath (better known these days as "Tootie"), the leader's husky vocals and fine piano work make her sound so much older than the 25-year old on this Lp. She gives credit to JS Bach for introducing her to his world, writing "I wanted to be a concert pianist." After studying at the Julliard School in New York City, the North Carolina native worked as an accompanist until she decided how her career would go.  The only original tune  among the 11 tracks is the instrumental "Central Park Blues"; still, Ms. Simone makes pieces like "I Loves You Porgy" and "My Baby Just Cares For Me" (this version swings slyly) her own.  On the title track, she juxtaposes the melody of "Good King Wenceslas" with the Lorenz Hart lyrics to great effect.

Nina Simone (1933-2003) would go to create many memorable songs and concerts and one can hear the seeds of her long career on this debut recording. If you don't have it, the sound quality on this reissue is stellar.

Other releases in the "first wave" include Dexter Gordon's "Daddy Plays the Horn", "The Jazz Experiments of Charles Mingus" from 1953, Chris Connor's "Sings Lullaby for Lovers" and the short (16 minutes) "Modern Quintet" from bassist/cellist Oscar Pettiford (originally released as a 10-inch Lp, it's worth it). There is not a clunker among them. For more information, go to bethlehemrecords.com.

Here's a brilliant idea for a big band recording - put together a series of compositions by Joe Lovano (whose career as a musician spans over 3 decades), give them to Gil Goldstein to arrange as a suite and get a top-notch ensemble to play these pieces. That's exactly what you get with "Sonata Suite for the Brussels Jazz Orchestra" (Half Note Records).  The 17 musicians who make up the BJO (including Artistic Director and saxophonist Frank Vaganée) sound splendid on these 8 compositions by Lovano who also plays tenor saxophone throughout as well as 1 track that features his aulochrome (a soprano saxophone with 1 reed and 2 pipes - go to www.aulochrome.com/aulochrome to find out more).

The entire program is dedicated to Lovano's mother Josephine (Giuseppina) Verzi Lovano who passed away in May 2012.  A native of Cleveland, Ohio, her familiar roots were from Sicily and those roots reman an important touchstone for the saxophonists.  2 of the tracks, "Streets of Naples" and "Viva Caruso", come from his 2002 CD dedicated to the life and music of the great vocalist Enrico Caruso. That, too was a large ensemble effort (Goldstein appeared on accordion).  The pieces here retain the "folk" influence of the previous versions (especially "Streets of Naples") while the new arrangements emphasize section playing.  Throughout the program, Lovano solos with abandon - in fact, the feeling of joy infuses most of the material.  Even ballad pieces, such as "Sanctuary Park", glisten with creativity.  The title track, first recorded by Lovano's Us Five, opens the program - it is also a ballad and has Lovano's most expansive solo with horn and reed voicings that display the influence of Gil Evans on the arranger. The rhythm section (guitarist Hendrik Breackman, pianist Nathalie Loriers, bassist Jos Machtel and drummer Toni Vitacolonna) are also stellar throughout with the drummer's easy yet forceful "swing" supporting and prodding the soloists. "Big Ben", dedicated to Ben Webster, has a wonderful moment in the middle of the solos where 4 soprano saxophonists trade "licks.

Joe Lovano has a lage discography, filled with stunning trio efforts, work with Paul Motian, plus his "swing" nonet and other large ensemble recordings.  The work done here by the saxophonist, by Gil Goldstein and the Brussels Jazz Orchestra is by no means a retrospective. Like many jazz musicians, Joe Lovano is continually exploring, finding alternative approaches to his original pieces.  "Wild Beauty" is an apt description of this music and Lovano's seemingly limitless quest.

As I write this, Joe Lovano begins a week-long residency (12/03-12/08) at The Stone in New York City to celebrate his 60th birthday.  For more information about that and other matters Lovano, go to www.joelovano.com.