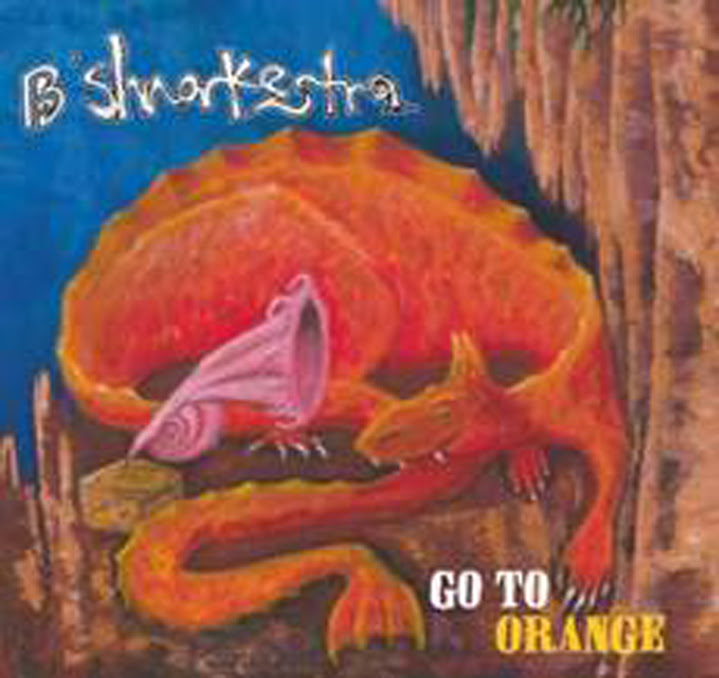 Can't speak for other reviewers but I would think those of you who receive music from all over the world to review and/or write about love to be surprised, especially pleasantly.  Such is the case with "Go To Orange" (Present Sounds Recording) by B'Shnorkestra, a 12-person (plus guests) ensemble based in Seattle, Washington.  The brainchild of trumpeter/ composer Samantha Boshnack, this group blends 2 reeds, 2 brass, 2 violinists, 1 violist, 2 bassists, 2 cellists,1 percussionist and a conductor into a most pleasant of musical stews.  Best of all, like the group's name, one cannot really categorize Ms. Boshnack's music. One can compare the composer/arranger's approach to that of Danish guitarist/composer Pierre Dørge's New Jungle Orchestra in that nothing is sacred save for the joy of making music.  There's the influence of Indonesia music that NJO has explored over the years in the percussion section of several tracks, especially "Pangkur" that features the vocals of Megan O'Donoghue-Williams and the work of Sri Joko Raharjo on gender (metallophone) and rebab (2-stringed bowed lute). In fact, the composer traveled to Surakarta, Indonesia, to record the percussion for the track.

Elsewhere, the two bassists lead the ensemble into "La Noche Negra" joined by guest percussionist Lalo Bello (congas) who locks in with percussionist Adam Kozie to create a most sensuous rhythm. The strings engage in a call-and-response with the trumpets and flute on the main theme.  The cellists give added depth to "Zim" along with the bowed basses. Alto saxophonist Chris Credit (who is also a member of Ms. Boshnack's Reptet) on "Symposium", rising over the brass and strings. The cellists' low notes open to a fine bass solo before the ensemble returns for a section where everyone has his or her phrases.  It feels magical when the instruments come together to read the main theme.  Percussionist Bello returns for the Afro-Cuban "jump" piece "B'schnultimate", once again joining forces with Kozie (and french horn player who also plays percussion Greg Campbell) to create a most wonderful rhythm for the leader to play her finest solo.

What's in a name?  Admittedly, B'Schnorkestra may be a weird monicker but the music the ensemble makes is exciting, melodic, at times quite fascinating and great fun.  The string section is fully engaged throughout (they are not there strictly for color) and the numerous solos are quite strong. Don't ignore this recording, following the title's command and "Go To Orange" - for more information, go to thebshnorkesra.wordpress.com.

Pianist Dick Hyman (86 and going strong) really enjoys his duo with clarinetist/tenor saxophonist Ken Peplowski (54 and at the top of his game) - both men love to play and improvise, they know a treasure trove of songs (from Broadway to "popular" standards of the 40s and 50s to the music of Thelonious Monk) and, each time they play, they surprise each other as well as the audience.  All that and more is evident on "Live at the Kitano" (The Victoria Company) recorded in the early Spring of 2012.  Want swing?  The CD opens with a joyous romp through "The Blue Room" composed by Rodgers and Hart in 1927. You say you want the blues? Listen to Mr. Hyman's rumbling piano lines on W.C. Handy's "Yellow Dog Blues" (from 1912) and then enjoy the ride as his right hand creates a splendid solo over the ever-rhythmic left.  Mr. Peplowski has a gritty sound on this track but, when he hits some of the brilliant high notes, the room shakes.  How about a lovely ballad?  The sweet clarinet tone on "My Ship", penned by Ira Gershwin and Kurt Weill for the musical "Lady In The Dark" (1941) is so emotionally rich plus Mr. Hyman's fine solo is intelligent, impressionistic and wistful.  How about a taste of Monk?  How about 2?  "Ugly Beauty", one of the great pianist's finer pieces, is less than the former and more the latter, wistful as well but with a wonderful piano solo.  Meanwhile, "I Mean You!" (co-written by Monk and Coleman Hawkins) bounces with glee. The pianist's left hand is downright magical during the clarinet solo and both hands are magnificent for the lengthy solo.

"Live at the Kitano" is so good you wish you had been there as Dick Hyman and Ken Peplowksi created this delightful program.  The hour seems to go by in a flash and, trust me, you'll want to return to this CD many, many times.  For more information, go to www.victoriarecords.net.

Music fans know pianist James Weidman from his work with the late Abbey Lincoln, Steve Coleman and, most recently, with Joe Lovano's Us Five.  If you happen to live in Connecticut in the proximity of Wesleyan University, you'll know Mr. Weidman's from his many years working with vibraphonist Jay Hoggard (in fact, he just performed with Professor Hoggard at Bushnell Park's Monday Night Jazz series.)  He has just issued his 5th CD as a leader, "Truth and Actuality" (Inner Circle Music) working with bassist Harvie S and drummer Steve Williams to create a program that is a primer for any person who wants to know Black American music sounds like played by 3 fine artists.  Dubbed The Aperturistic Trio (the word "aperturistic" refers to apertures, specifically in cameras), this music is a joyous conversation between friends.  Not a "jam" session  - no, the pianist has supplied 5 of the 8 compositions and the Trio play strong, well-constructed, melodies that open up to good solos and interactions.  Bassist S is always melodic, supportive of both the pianist and allowing the drummer to really explore.  That's evident on the opening cut, "Dance of the Macrocosmic People" where the bass is the "foundation" while Williams plays the counterpoint as well as the partner of the piano. On the next track, "Pastor B's Homily", the drummer and bassist work together to create the fine sense of swing for the pianist to deliver his sermon.

The urgent piano chords that introduce "Courage" quickly give way to a lengthy bass solo; as bassist S closes his statement, the pianist re-introduces the opening chords but then takes the piece in a direction where the drummer varies the tempo and the bass plays counterpoint.  The bassist takes another long yet melodic solo before Williams expresses his musical opinion with a fine solo of his own. The title track is a ballad yet one that displays a sense of adventure, with rubato sections, strong cymbal work, bowed bass and a piano solo that displays a "soulful" feel. Weidman rides atop the hard-edged drumming, creating a solo flowing with both rhythmic and melodic ideas.

The program closes with a handsome reading of Stevie Wonder's "Send One Your Love" -  the pianist truly caresses the melody but also allows himself to dig into the song originally recorded by the composer for his 1973 Lp, "The Secret Life of Plants." Weidman does not overplay here, or anywhere on the CD, building his solo from the melody, adding his own colors and rhythmic feints.

James Weidman is not a prolific recording artist, 5 albums in a career that spans nearly 4 decades.  But, he sure knows how to make them standout. His previous release, 2009's "Three Worlds", featured Marty Ehrlich on reeds, Ray Anderson on trombone and the afore-mentioned Professor Hoggard on vibes - that CD, like "Truth and Actuality", covered a wide swath of musical territory but had a bigger sound palette. That palette is not diminished one iota on the new Trio recording but shines in many different and enjoyable ways.  For more information, go to www.jamesweidman.com.