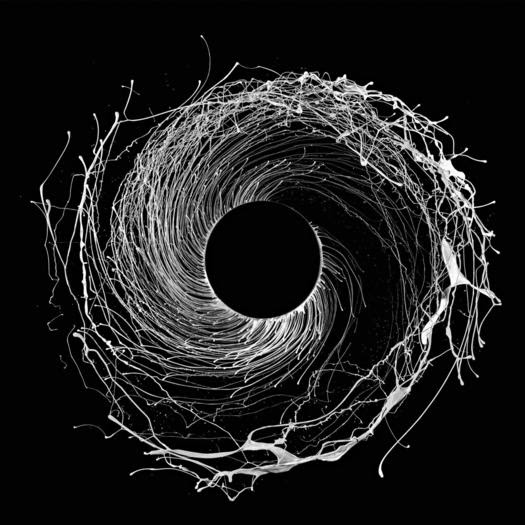 For its 3rd release (and 1st for Thirsty Ear), Dawn of Midi - Aakaash Israni (bass), Amino Belyamani (piano) and Qasim Naqvi (percussion) - have created a fascinating and hypnotizing program that seems to dare one to turn away.  "Dysnomia" takes its name from a neurological condition that affects memory, especially when it comes to naming common objects.  Yet, Dysnomia is also the only moon of the dwarf planet Eris and also means "lawlessness" when applied to Eris's daughters.

For DOM, "Dysnomia" is a series of compositions {Author's note: Actually, the music is one continuous composition with 9 movements, 6 by the bassist and pianist, the rest by the pianist.} that continually move forward growing out from the opening and built on minimalistic figures, i.e., plucked notes on the piano and bass, the thumping of the bass drum and more.  There are no breaks between the tracks.  If you skip from, say movement 1 ("Io") to movement 6 ("Ymir"), you'll hear that the trio has gone into different territory yut "Ymir" builds off the closing minutes of the previous movement, "Moon".  In the same respect, the "groove" of movement 7, "Ijiraq", begins 30 seconds before the end of track 6.

Got that - honestly, I've been playing this music in the car, through headphones late at night, in the morning as I do the stretches that loosen my back, and it never fails to grab my attention. The rhythms have a Middle-Eastern/South Asian feel.  One may be reminded of the repetitive grooves of New Order or certain Keith Jarrett Trio pieces that are improvised off of the pianist's hypnotic phrases. Whatever you hear, this is precisely performed rhythmic music;  all 3 musicians are playing rhythms either in unison or counterpoint.  There is "movement" within the movements but that's to emphasize a shift in the pattern.  Mesmerizing, more involving and intense than early minimalistic works by Steve Reich and Phillip Glass, and, ultimately, haunting - Dawn of Midi touches a nerve that carries you out of yourself into an altered world and, yes, you'll want to return time and again.  For more information, go to www.dawnofmidi.com. 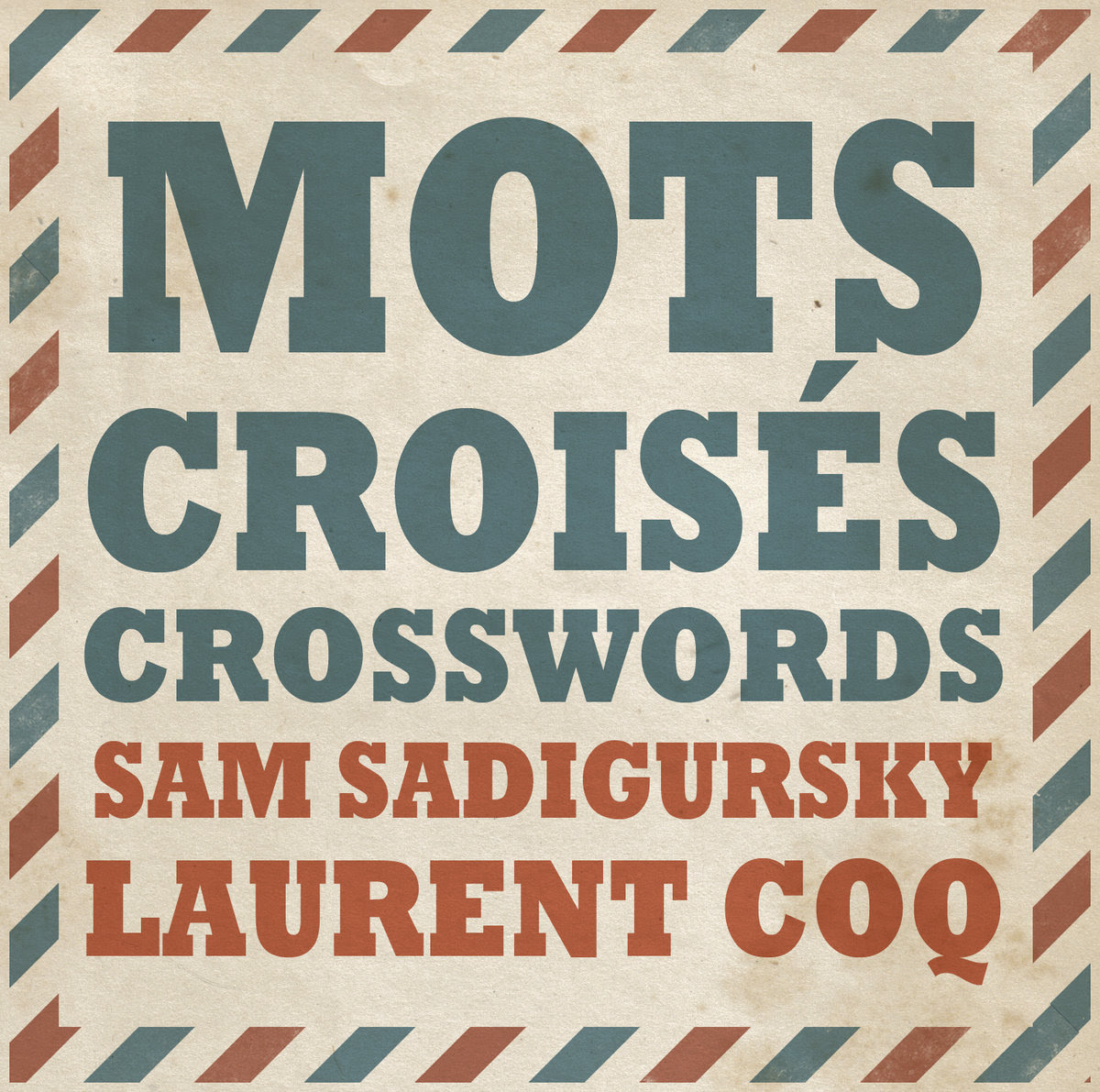 Earlier this year, Sam Sadigursky released "Words Project IV" (New Amsterdam Records), the latest in his series of integrating poetry into music and vice versa (my review is here.) At the same time, he and his collaborators - Laurent Coq (piano, electric piano), Yoni Zelnik (acoustic bass), Karl Jannuska (drums) and Christine Correa (vocals) - recorded another project titled "Crosswords/Mot Croises" with a couple of fascinating twists.  Sadigursky and Coq chose 4 poems, 2 by poets writing in English and 2 writing in French.  The saxophonist/flutist chose poems by D.H. Lawrence ("A White Blossom") and William Carlos Williams ("The Post Office Clerk and his Daily Duty") while the pianist offered works by Blaise Cendrars ("Au Cinq Coins") and Eugene Guillevic ("Eternite").  Both wrote music for each poem with Ms. Correa singing the English lyrics and the translations of the French poems while French chanteuse Laurence Allison sings the original French poems and the English poems translated into French. There's a bonus track, Mariel (Muriel) Rukeyser's "Dreams" set to music by Sadigursky and both vocalists sing in English.

For the Williams' poem, Sadigursky creates a funky background, with Jannuska martial drumming and Coq's combination of electric and acoustic piano (there's where the pianist plays one line going down on electric piano and a line going up on acoustic.)  Ms. Correa tells the story of a postal clerk just doing his job treating every customer the same and, seemingly, never smiling.  For the pianist's take on the poem, the music is more expansive with a flowing melody line, like a melody by Stephen Sondheim.  Ms. Allison does a lovely wordless vocal over Jannuska's hand drumming and Coq's block chords. Sadigursky's take on Guillevic's "Eternity" is quite dramatic with Ms. Correa taking a defiant stand as she sings the lyrics.  Coq's version is much funkier, with the electric piano filling the bottom for the verse and supporting the tenor saxophone as it interacts with the vocal.  For the opening track, Cendrar's surrealistic "Au Cinq Coins", Coq creates a multi-sectioned piece driven at first by the drums and voice then getting quieter for the bass and piano solos.  Sadigursky takes the same poem, creates a backdrop that displays, at times, great tension between the words and music, yet also has very pretty interludes with Ms. Correa's voice supported by the piano, hand percussion and the fluttering lines of the flutist.

Originally, it was thought/planned that "Crosswords/Mot Croises" would be released alongside "Words Project IV" but that did not come to pass.  Instead, Sam Sadigursky and Laurent Coq decided to sell it themselves online - go to sadigurskycoq.com/ where you can listen and purchase. This is an impressive partner to the New Amsterdam release, in some ways a bolder project in its concept with music that's just as exciting, challenging, and rewarding.  For even more information, go to samsadigursky.com.
************************************** 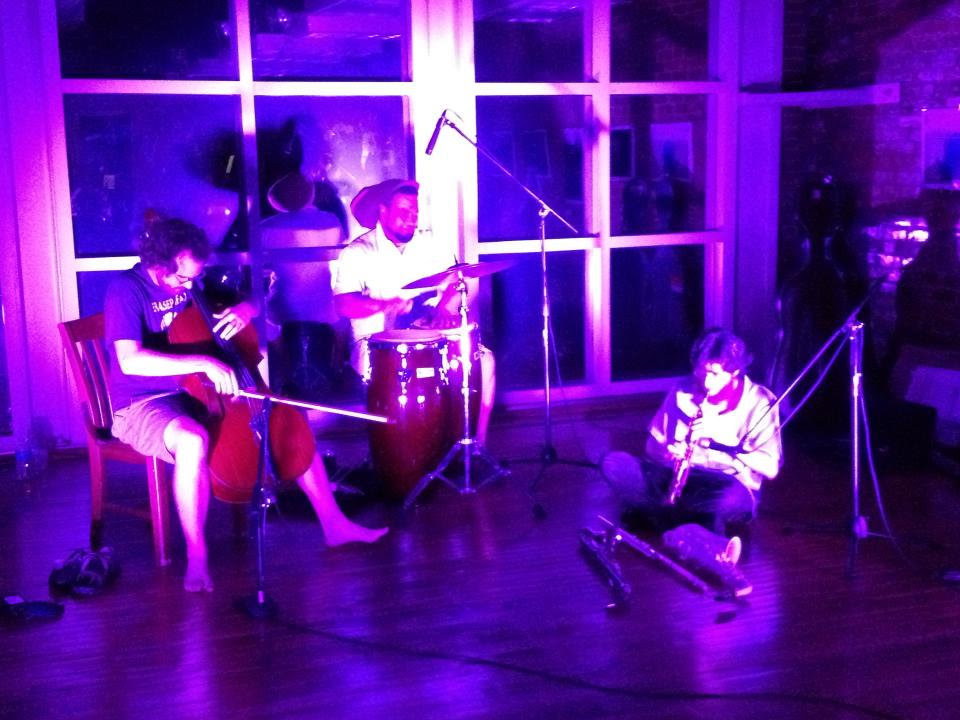 For the first of its 2 concerts in August, the Uncertainty Music Series presents a triple bill on Saturday August 10 at 8 p.m. in the crowded space of Never Ending Books, 810 State Street in New Haven.  Scheduled to perform is the duo of Brendon Randall-Myers (guitar) and Marc Jeren-Deriso (drums) - they go by the name of GRAINS - plus the solo cello of Nathan Bontrager and capped off by the Living Space Trio (cellist Benjamin Shirley, percussionist Scotty Bryan and reed player Eric Fontaine).  You can be certain that the music will be challenging, mostly improvised and original.  For more information, go to uncertaintymusic.com.

The other day, I mentioned in a posting that I would be writing this week about the New Haven Jazz Festival, taking place from Monday August 12 - Sunday August 19 in various venues in the Elm City.  But, before I post that column, I get to interview Jazz Haven founder and retired director Doug Morrill at 12:30 p.m. Thursday on WLIS-AM 1420 (Old Saybrook) and WMRD-AM 1150 (Middletown) and online at www.wliswmrd.net. Jazz Haven has been organizing the Festival since 2008, expanding the offerings to a full week and involving local restaurants. To find out more about the Festival week, go to jazzhaven.org.
Posted by Richard B. Kamins at 10:31 PM