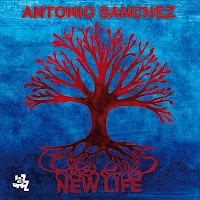 Drummer/composer Antonio Sanchez may be best-known for his work with guitarist/composer Pat Metheny but his work has graced the bands of Gary Burton, Chick Corea, Miguel Zenon, Joshua Redman and a slew of other contemporary musicians.  "New Life" (CamJazz) is his 3rd releases as a leader and it displays his continuing maturity as a composer.  Donny McCaslin (tenor) and David Binney (alto) share the front line while bassist Matt Brewer anchors the rhythm section - both of Sanchez's previous releases features 2 saxophonists but the difference here is the addition of pianist John Escreet.

From the rubato opening moments of the first track, "Uprisings and Revolutions", to the gospel/funk-inspired rhythms and splendid saxophone sounds of the final cut, "Family Ties", this music has substance as well as many fine solos.  McCaslin's solos start with a wealth of melodic possibilities, allowing him to follow his muse.  On that first track, he jumps aboard the fiery drumming, the excellent bass counterpoint and the rich piano chords to produce a brilliant statement. Binney is also an adventurous soloist, digging into the rich chords on the title track and taking his lines high above the thunderous rhythm section. That cut also features the wordless vocals of Thana Alexa; her work is reminiscent of the vocals one hears in the Metheny band. On the second, slower, half of the track (at 14:19, it's the longest on the disk), Escreet creates an emotionally rich solo, with melodic phrases falling like rainwater off a pitched roof. As the energy level rises, the song takes on an urgency that draws in the listener.

The funky trio of saxophones and drums lead one into "The Real McDaddy" - after that New Orleans-inspired interaction, the band maneuvers the tricky, odd-meter, melody line.  Escreet's Fender Rhodes work si slippery and sly as are the bass lines and the leader's dancing drum accompaniment. The driving rhythms and twin saxophone attack of "Medusa" are yet another highlight, with both McCaslin and Binney pushing the energy levels. McCaslin switches to soprano for the handsome ballad "Air", blending his voice on the closing reading of theme with Binney's expressive alto.

"New Life" is contemporary music at its best. Antonio Sanchez is a generous composer and arranger, with melodies ripe with harmonic variations for the soloists.  He allows those soloists time to build coherent, fiery and joyous statements; listeners can get lost in their fine work or get lost in just effortless the rhythm section lends its support. Hard not to imagine this quintet being wonderful in a live setting - in the meantime, grab hold of "New Life" and enjoy the ride.  For more information, go to www.antoniosanchez.net. 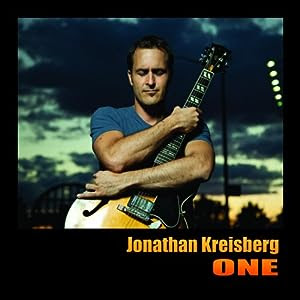 New York City-native Jonathan Kresiberg has an impressive resume - the guitarist has played classical music with Michael Tilson Thomas, jazz with Lee Konitz and Joe Locke (to name but 2) and worked with Dr. Lonnie Smith. His new CD, "One" (New for Now Music) is his ninth release as a solo artist and his first solo CD.  The 11 cuts, with the exception of 2 originals (both of which use effects to make the guitar sound like an organ), are all standards. The guitarist goes for the heart of each piece - the melody - making sure to state that before heading into his solo. He caresses the Johnny Mercer melody for "Skylark", imbuing the sweet song with a touch of longing.  The solo has a dancing quality, as if Kresiberg was having a sense memory of a happier time. He emphasizes the bluesy side of the oft-recorded "Summertime" with a solo that seems to rise off the words "you'll spread your wings and you'll take to the sky".  The sprightly version of "My Favorite Things" may remind some of the work of Joe Pass in the way Kresiberg seamlessly blends melody and solo. Leonard Cohen's "Hallelujah" has become a modern "standard", perhaps beyond the point of redundancy.  Yet, Kresiberg makes the song anew, emphasizing the folk-music quality of the melody as well as adding a touch of atonality at one point.  The program ends with an original, "Escape From Lower Formant Shift", an effects-laden piece that sounds like heavy metal among the folky and jazzy melodies that precede it.  It's, admittedly, a jarring finish.

Despite that oddity, "One" is quite enjoyable, a well executed program that shows the many and varied sides of Jonathan Kreisberg.  If you have paid attention to his music, you'll know that he has always embraced melody and built his solos organically from them.  He can play but, even better, his music has heart.  For more information, go to www.jonathankresiberg.com.

Giacomo Gates is a vocalist with a history like few that have come to jazz.  Toiling on oil pipelines in Alaska, he did not return to his home state of Connecticut until his late 30s and has been perfecting his craft for the past 2 decades.  His previous Savant recording was dedicated to the music of Gil Scott-Heron, issued right about the time the poet/performer passed away.  "Miles Tones" looks at the music of Miles Davis, features a top-notch band (trumpeter Freddie Hendrix, pianist John Di Martino, guitarist Dave Stryker, bassist Lonnie Plaxico and drummer Vincent Ector) and excellent arrangements.  To his credit, Gates blends well-known Miles classics, such as "All Blues", "Milestones" and "So What", with several surprising choices as "Be-Bop Blues" (based on "Boplicity" from "Birth of the Cool") and "'Long Come Tutu" from "Tutu." The latter is quite funky with a wonderful muted trumpet support while the former swings ever-so-smoothly, Gates' "vocalese" solo a real treat.  Di Martino's classy piano lines support the vocal on "'Round Midnight" - here, Hendrix's muted trumpet lines weave beneath the vocal. The afore-mentioned "So What" is a perfect match for Gates voice, which dances like Cannonball Adderley's alto sax did on the original version.  Ector's "swinging" drums set the pace on "Four" and the "groove" is strengthened by Plaxico's active walking bass lines.

Also to the leader's credit, these songs do not overstay their welcome with only one over 6 minutes and most under 5.  The solos are concise but impressive; it's the wonderful support of the musicians that stand out as does Giacomo Gates's "easy" approach to the vocals.He does not force his way through the material, making the experience all the more satisfying.  To find out more, go to www.giacomogates.com.
Posted by Richard B. Kamins at 6:10 PM