A Time To Dance, A Time to Grow

Tenor saxophonist Sean Nowell, born in Alabama, educated in Boston and New York, has, over the course of his recording career for Positone Records, shown that he can not only swing but also bring the funk.  "The Kung-Fu Masters" is his 4th CD for the Los Angeles, California-based label and it would not be out of place that Nowell and his group display their considerable "chops" and that the music has a real kick.

Bad puns aside, Nowell's new CD channels the sounds of The Crusaders (circa late 1970s), Chicago and The Headhunters into a most delightful mash-up.  With the driving rhythm section of Evan Marien (electric bass) and Marko Djordjevic (drums) plus the twin keyboards of Art Hirahara and Adam Klipple (he doubles on Hammond organ), the front line of Nowell, Brad Mason (trumpet) and Michael Dease (trombone) play music inspired by martial arts, breakdancing and comic books.  And this music is quite good fun.  With the exception of the explosive opening track, a ripping version of Jimi Hendrix's "Crosstown Traffic", Nowell composed and arranged the material.  It's impossible not to snap your fingers to the crackling funk of "The 55th Chamber" and "In the Shikshteesh", the former riding on Hirahara's rippling electric piano while the latter features the rich trombone sounds of Dease (one can hear the influence of Crusaders bone-man Wayne Henderson on this track.) Funk oozes out of the speakers on "Song of the Southland", with the languid melody lines drifting over the keyboard washes, the throbbing bass lines and the "fatback" drums.  Klipple's burbling organ ushers in the handsome layered melody lines of "Prosperity" - the organist (who leads The Drive-by Leslies) takes the only solo and it drips with soulful conviction.

Other highlights include the rambunctious "The Outside World", the propulsive excitement of "Uncrumplable" and the fiery overdrive of "Can Do Man" that takes the program out, leaving the listener breathless.  Through it all, Sean Nowell's tenor, whether electronically altered (there's even a bit of "wah-wah") or clean, leads the charge.  He is generous in ceding the spotlight to his fellow players, preferring to blend in with the brass (though he stands on several tracks, including the aptly-titled "For All Intensive Purposes").  If you're looking to shake off the winter doldrums and just have a good listen, "The Kung-Fu Masters" "kicks out the jams" in fine style.  For more information, go to www.thekungfumasters.com. 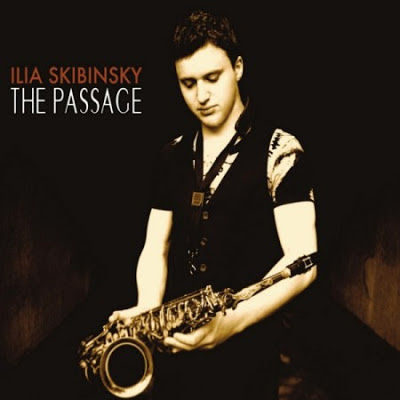 Born in Russia, raised in Israel, saxophonist/composer Ilia Skibinsky is a young man who has not rushed onto the scene.  While still under 30, Skibinsky has played in pit bands for numerous Israeli productions, toured with Cirque du Soleil, written soundtracks for television documentaries, and studies at the New School in New York City (he also studies with Joel Frahm). "The Passage" (Mythology Records) is his debut as a leader and is quite a mature statement.  The core band features Glenn Zaleski (piano), Edward Perez (bass) and Colin Stranahan (drums) plus the trumpet of Matt Jodrell and tenor saxophone of Matthew Silberman on 3 tracks as well as contributions from guitarist Mike Moreno on 3 cuts.  Russian-born violinist Joe Deninzon (leader of the fusion-jazz group Stratospheerius) plays Skibinsky's lovely string arrangement on the handsome ballad "When We Forget."  " Handsome" is the proper word to describe the bulk of this music; these are well-constructed compositions that have strong melody lines and smart arrangements. Yet, there is a fire burning beneath the 2-part title track that opens the program.  Zaleski's hypnotic piano chords lead in bass and drums while Skibinsky's alto shares the melody line with Moreno's guitar.  Jodrell and Silberman add their "voices" to the mix. The first solo belongs to Moreno, his rippling lines moving easily over the active rhythm section (Stranahan stokes the energy here without great volume.)  "Part 2" comes in like a lion, the propulsive bass and drums driving the soloists (arranged in a round-robin "call-and-response").

The leader does not really step into the solo spotlight until the 3rd track, "Seven Skies."  Here, Skibinsky overdubs alto and soprano saxophones for the opening melody before stepping out on the higher reed for his solo.  Zaleski's excellent counterpoint and Stranahan's active drumming stand out as does the pianist's exploratory solo.  When the leader returns, he executes a short but sparkling dialogue/dance with the drummer before taking off for a second excellent solo.  The spirit of Ralph Towner's music floats through "Distant Lights", the melody rising over the rhythm section before stopping for Perez's fine bass solo;  Zaleski is next and his melodic phrases usher in the alto solo which occurs over a Brazilian-influenced rhythm. Skibinsky's phrases hop, skip and fly above the rhythm section, reminding this listener of Miguel Zenon.  Moreno's guitar weaves around the alto on the slow yet intense "Beyond the Sun" - in the midst of both the guitar and flowing alto solos, one should also pay close attention to the "conversation" in the rhythm section. Skibinsky returns to soprano saxophone for "Dorian Ways", a multi-sectioned piece with an irresistible rhythmic drive, rippling melody line (more overdubbing from the leader) and outstanding piano work.  The soprano solo moves effortlessly over the dynamic rhythms, the pure sound of the higher notes dancing along with the drums.  The program closes with "What Words Cannot Express", an emotional ballad with another fine bass spotlight as well as excellent cymbal and brushwork.

The more one listens to "The Passage", the more impressive the project becomes.  Ilia Skibinsky shows his ability to compose, arrange, play and direct in a way that stands out among the myriad releases of the early weeks of 2013.  This excellent CD stands up well next to the new releases from Chris Potter and Wayne Shorter, displaying a maturity of musical understanding similar to those fine musicians. I'd love to hear this music live.  For more information, go to www.iliaskymusic.com.
Posted by Richard B. Kamins at 6:07 AM