The Jazzhaus label, located in Halle, Germany, owns the rights to all the video and audio recordings from the archives of Sudwestrundfunk (SWR);  we are talking 3000 hours of footage featuring over 400 ensembles and soloists playing all styles of jazz (just look at the 4 examples in this column.)

First up is the Duke Ellington Orchestra, recorded in March of 1967 in Stuttgart.  The band was in the midst of a long tour which would be interrupted 2 months later by the death of Billy Strayhorn.  The band features a number of its long-time stalwarts, from saxophonists Johnny Hodges, Paul Gonsalves and Harry Carney to trumpeters Cat Anderson and Cootie Williams plus the silky smooth clarinet of Jimmy Hamilton and splendid trombone of Lawrence Brown.  This digital mix moves the rhythm section of bassist John Lamb and drummer Rufus Jones as well as the impressionistic piano work of the leader. As for the material, it covers a wide swath of the Ellington/Strayhorn songbook, from the tried-and-true "Tutti for Cootie" to newer pieces like "Swamp Goo" (with a raucous solo from Russell Procope on  clarinet.)  Strayhorn's "Blood Count" is presented as "Freakish Lights" and there is a splendid take of French composer Raymond Fol's "Salome" (Cat Anderson hits some seriously high notes on the climax of the song.)

Yes, there are plenty of Duke Ellington recordings on the market but there always seems to be room for one more, especially one as well-done as this live document.  Duke Ellington and the Orchestra spent so much time "on the road" that one might expect that the musicians could phone in the concert.  That's certainly not the case here.  It's easy to understand why this music remains so popular - it's vital, emotionally rich and, much of the time, loads of fun. 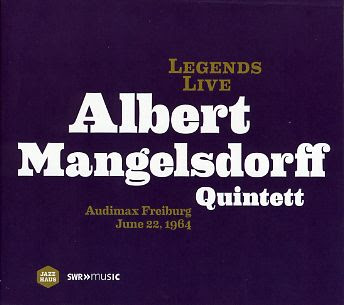 Most of us who discovered trombonist Albert Mangesldorff did so through a series of Lps released by the MPS Records label. Those recordings included several solo recordings in which the German-born trombonist showed off his skill playing multi-phonics (split notes) - he went on record with the likes of saxophonists John Surman and Lee Konitz, bassist Jaco Pastorius and drummers Elvin Jones, Ronald Shannon Jackson and Han Bennink. This recording features his working Quintett from 1964 including Heinz Sauer (tenor sax and soprano sax), Gunter Kronberg (alto sax), Gunter Lenz (bass) and Ralf Hubner (drums). At the time of this recording, the group had returned for a tour of Asia and it shows in the music.  This group would go on to record "Now Jazz Ramwong" later in the year - it's the opening track on this CD and one can hear the languid yet loping (hypnotic) groove that would also show up in John Coltrane's Quartet recordings several years later.  The ensemble also understood swing - you can hear that on "Set 'Em Up" but the majority of the music reflects the sounds they heard interacting with other musicians on their Far East tour.  "The rhythm section takes center stage on "Raknahs" (a tribute to Indian ragas - turn the title around) - later on in the program, they perform the sitar master's "Theme From Pather Panchali" digging deep into the Indian rhythms without abandoning a Western beat. "Far Out Far East" is a bass spotlight for Lenz, who acquits himself impressively.  On the closing track, "Es Sungen Drei Engel", the Quintett truly struts its stuff with strong ensemble playing and a rousing trombone solo.

Of all the Jazzhaus recordings I have heard so far, the Albert Mangelsdorff Quintett CD is the most revealing, giving one the true insight into the trombonist's development of his music and playing. This is highly recommended. 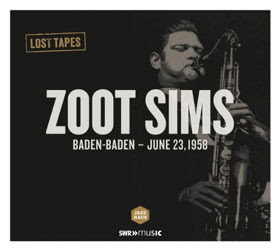 This live date from saxophonist Zoot Sims (1925-1985) dates from 1958 and came about after Sims met fellow saxophonist Han Koller while on tour with the Benny Goodman Orchestra.  With the help of producer Joachim-Ernst Berendt, the reed players organized a band and a concert to take place in Baden-Baden, Germany.  Along for the ride are trombonist Willie Dennis (4 tracks), flautists Adi Feuerstein and Gerd Husemann (2 tracks), baritone saxophonist and flautist Helmut Brandt (3 tracks) and the rhythm section of Hans Hammerschmid (piano), Peter Trunk (bass) and the great Kenny Clarke (drums).

As opposed to the first 2 recordings, this one has a looser vibe yet there are moments where everyone and thing falls into place.  Pianist Hammerschmid's "Blue Night" swings pleasingly and the horn arrangment, bolstered by Brandt's baritone, is smart. The bari player gets the spotlight on "I Surrender Dear" while Dennis gets the honor on "These Foolish Things." - both do a fine job and I like the way it breaks up the the order. Sims and Koller break out their clarinets for Hammerschmid's "Minor Meeting for Two Clarinets" (you can hear that both players paid attention to the afore-mentioned Mr. Goodman.)  Clarke sparks the saxophonists on Denzil Best's romp titled "Alan's Alley" and swings like mad on Koller's reading of Richard Rodger's "Falling In Love."  Sims' mellow tenor leads the way on the classic "Tangerine", playing a most melodic solo.

This recording seems to get better with each listen. There is a lot to pay attention to (the rhythm section, the smart arrangements, and the majority of good solos) - if you like your jazz "straight-ahead", this CD is a pleasurable experience. 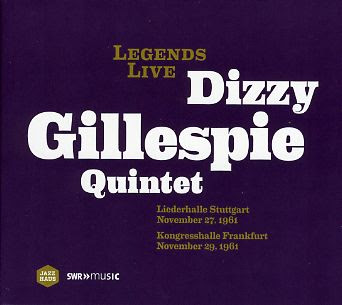 John Birks "Dizzy" Gillespie was one of those musicians who never failed to make his listeners smile.  A sparkling yet playful trumpeter (who can' forget those cheeks) as well as a influential vocalist, Gillespie was one of the pioneers in bring bebop as well as Latin Jazz to a wider audience.  This recording comes from 2 concerts in late November 1961 features a band that Leo Wright (alto sax, flute), Bob Cunningham (bass), Mel Lewis (drums) and the pre-movie and television soundtrack composer Lalo Schifrin on piano. The program commences with a swinging take of Duke Ellington's "The Mooche" - stretched out to just over 16 minutes, everyone gets plenty of time to solo.  Wright digs in nicely while Dizzy gets pretty funky.  Schifrin takes a wide-ranging solo, displaying a bit of his classical upbringing and a good dollop of the blues as well. Wright's flute leads the way with a sometimes lilting, sometimes gritty solo on "Willow Weep For Me" (the trumpeter sits this tune out.) The leader shows off his blues chops on "I Can't Get Started" and brings out the mute for his Middle-Eastern tinged "Kush." Wright takes flight on the latter tune with a solo that begins in a Charlie Parker mode before taking a turn to the Eric Dolphy side.  Lewis and Cunningham really push the soloists (dig the drummer behind the pianist) and, though the song stretches to nearly 16 minutes, there is not a boring moment.

There are 2 versions of Gillespie's "Con Alma" (recorded 2 days apart) and, while the structure and solo order is the same, it's interesting and instructive to compare the solos.  Can't say that I like one over the other but Leo Wright really shines on the second version.

The late 1950s and 1960s were a fertile time for jazz, especially as it marched across the globe. These 4 CDs cover a lot of musical territory and each has rewards for jazz lovers.  For more information, go to www.jazzhaus-label.com.