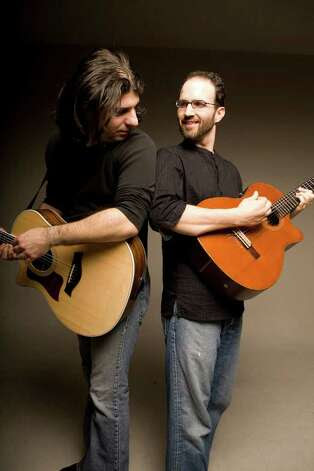 Chanukah commences at sundown this Saturday (December 8) - while not the religious celebration that Christmas is, the holiday celebrates a military victory as well as the the miracle of the oil that lasted 8 nights (read more here.)  Usually the holiday falls near the winter solstice and the light coming from the menorah is always a welcome site.

Not sure if Anne-Marie of The Buttonwood Tree had Chanukah in mind when she booked Isra-Alien for this Saturday but the acoustic guitar duo of Oren Neiman and Gilad Ben-Zvi will definitely light up the performance space at 605 Main Street in Middletown. The duo, both natives of Israel, met during their compulsory military service in the Israeli army and have been friends ever since.  After moving to New York City in 2005, they formed this ensemble with Neiman on nylon-string guitar and Ben-Zvi on steel string.  They released their self-titled, self-produced and self-released debut CD in 2009 and their latest, "Somewhere Is Here" just a few months ago. Their music is a joyous blend of Middle-Eastern melodies, Eastern European klezmer tunes, jazz, and world music - one can hear the influence of Belgian guitar genius Django Reinhardt as well as tango in the duo's eclectic mix.

Isra-Alien will be in The Buttonwood's spotlight at 8 p.m. - for more information, go to www.buttonwood.org.  To learn more about the duo and hear selections of their infectious music, go to www.israalien.com.

The tributes have been pouring out since news of the passing of pianist/composer Dave Brubeck went public.  A prolific composer, excellent pianist, humble human being and activist, Mr. Brubeck had a long and full life (passing one day before his 92nd birthday.)  He was a champion of creative music in that he rarely stood still.  Best known for his 1959 mega-hit, "Take Five" (composed by his long-time saxophonist Paul Desmond), a feature for the gifted drummer Joe Morello, Brubeck often transcended labels.  Yes, he certainly played and composed "jazz" music but also produced an oratorio, a cantata, religious works and more. He mentored young musicians as he traveled the world over.

One of the better tributes can be read on The New Yorker website - click here to read it - written by trumpeter/composer Taylor Ho Bynum, the words paint an excellent portrait of a man who blazed musical trails and never compromised his values.  Bynum also explains Dave Brubeck's influence on musicians such as Anthony Braxton and Cecil Taylor.  I, also, recommend going to Doug Ramsey's blog Rifftides for a several fine postings.  And, if you really need to be cheered up, go to www.davebrubeck.com where you can listen to the pianist playing Holiday music.  Finally, see if you can find the Clint Eastwood produced documentary from 2010 that aired on Turner Classic Movies - "In His Own Sweet Way" (the title of one of Mr. Brubeck's lovelier pieces) does an excellent job of telling the pianist's story.  For more information, click here.

Thank you, sir, for brightening our lives with your music and inspiration.