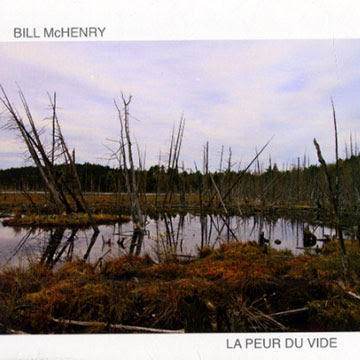 Bill McHenry is a saxophonist/composer who impresses one by always being himself in any musical situation. His latest Sunnyside release, "La Peur Du Vide" (fear of the void) features his latest quartet including Orrin Evans (piano), Eric Revis (bass) and drum master Andrew Cyrille (McHenry's previous quartet recordings featured Paul Motian.) Recorded live at The Village Vanguard in March of 2012, the group's second such engagement in 6 months.  All the music on the CD was written for this band - Cyrille is a much more forceful player than Motian was (in his later years) so several of these pieces have more fire than one might be used to on a McHenry recording. "Siglo XX" sounds like the classic John Coltrane Quartet with the pounding piano chords, Revis's melodic counterpoint behind the soloists and Cyrille's hearty swing.  The following track, "Today", is as quiet as the opener was fiery yet the interplay of the musicians is just as vital.  Cyrille and Revis lock into the groove on "In Sight", freeing both Evans and McHenry to have fun.  The pianist swings with abandon while McHenry alternates between melodic fragments and long, flowing, lines.

The title track is a quiet meditation, opening with the saxophonist, pianist and bassist moving in and around each other.  Revis, who plays alongside Evans in Tar Baby and also is a mainstay in the Branford Marsalis Quartet, displays his most melodic qualities on this track, especially during the impressive piano solo. Cyrille's brushwork stands out beneath the bass solo and his presence throughout the song adds subtle coloring.  "Trillard" closes the program; there is a splintered melody that leads to a series of solos.  Revis goes first, sticking to his bow and creating a multi-colored experience.  Evans digs in for his solo atop the clamor of the rhythm section. McHenry joins them for moment before taking off for his own exploration. There is a bluesy edge to his playing, at times, but when he and Cyrille take the spotlight, he creates a most playful solo. Cyrille's spotlight takes its time to build up, allowing him to explore different rhythmic patterns and colors.

"La Peur Du Vide" is honest music, without frills, ripe with creativity and melody. McHenry's choice of band members really pushed in new and, perhaps, unexpected directions.  Rewarding for him and the eager listener.   For more information, go to www.billmchenry.com.

Steve Lacy (1934-2004) first played Dixieland jazz before discovering Thelonious Monk; it was the influence of the latter that reverberated throughout Lacy's career.  He was also an influential soprano saxophonist, with a sound that had little to do with that of John Coltrane. Yet, you can hear his influence on contemporary players such as Jane Ira Bloom.

He spent the better part of 3 decades living in Europe (1970-2002) working with his own groups as well as working with pianist Misha Mengelberg and drummer Han Bennink.  Bennink is in the drum seat for "The Whammies Play the Music of Steve Lacy" (Driff Records), a sextet that also features Jorrit Dijkstra (alto saxophone, lyricon, co-producer), Pandelis Karayorgis (piano, co-producer), Jeb Bishop (trombone), Mary Oliver (violin, viola) and Nate McBride (bass). You can't help but hear the Monk influence in the loping rhythms of the opening 2 tracks, "Bone (to Lester Young)" and "As Usual (to Piet Mondrian)" as well as Monk's "Locomotive" that closes the CD. Given the pedigree of the musicians (plus the fact that Bennink is on the drums), this is not reverential music; instead, the sextet plays with fire, humor, and joy.  "Ducks (to Ben Webster)" opens with Dijkstra and Bishop doing their best duck calls.  When Bennink and Karayorgis enter the fray, the piece becomes a sparring match, with the drummer smashing away in the middle between sax (left channel) and trombone (right channel.)  Later on, the pianist takes a ride on the drummer's waves of sound. The playful melody line of "Dutch Masters (to Spike Jones & The City Slickers)" doesn't replicate the madness that Jones was able to conjure from his music, instead opting for what that band might sound like if it played mainstream jazz.

The band takes its name from a Lacy composition dedicated to trumpeter Fats Navarro; here, it is a rollicking free-for-all that features Bennink flailing away pushing Dijkstra to play his most intense solo followed by Bishop, who also feels the drummer's fire, his lines jabbing, bobbing and weaving in a most playful.  The Whammies do Steve Lacy justice without imitation - they feed off the composer's creative fire, the example of his life well-lived.  For more information, go to www.driffrecords.com.