The Fall Concert Series at Firehouse 12, 45 Crown Street in New Haven, takes a fine turn towards free improvisation when the performance space hosts the duo of Fred van Hove (piano, pictured left) and Lou Grassi (drums).  Van Hove, born and still living in Belguim, has been an active member of the European Free Music scene since the mid-1960s, first recording with tenor saxophonist Peter Brötzmann as a member of his Octet in 1968.  He went on to perform with American ex-patriate Don Cherry (trumpet) and German trombonist Albert Mangelsdorff.  All the while, van Hove had a busy solo career, one that has seen perform in various sized groups, from duos to big bands as well as a solo artist.  New Jersey-native Lou Grassi has been active in music since the early 1970s, in ensembles that, as he has described them, play "Ragtime to No-Time." He, also has written music for dance ensembles including ones led by the late Richard Bull and the still active Bill T. Jones.  Grassi's series of PoBand recordings for the CIMP label feature guest artists such as saxophonists Joseph Jarman (The Art Ensemble of Chicago), Marshall Allen (Sun Ra Arkestra) and John Tchicai.

The dynamic duo will play 2 sets - 8:30 and 10 p.m. - and it's the first gig in a tour that will take the musicians to Brooklyn and Riverdale NY and Baltimore, MD. For more information, go to firehouse12.com or call 203-785-0468. To check out their itinerary, go to www.lougrassi.com/PerformanceSchedule.html.

As I write this (approximately 4 p.m. on Sunday October 28), the Northeast Corridor of the United States awaits the arrival of Hurricane Sandy, possibly one of the most dangerous storms to ever hit the United States.  If that's not sobering enough, the storm arrives 14 months after Hurricane Irene devastated a good part of coastal, central and northern Connecticut and 365 days after a late October snowstorm left much of the state as well as a large swath of Massachusetts without power for upwards to 14 days.  For this storm, we have been warned of power outages that could last just as long.

My musical choices for such times are usually quieter recordings (uploaded to my iPod), often classical or jazz piano trio, and always soothing. 2 new recordings plus a newly-reissued favorite that are quite enjoyable are among many that are in the queue for Sandy.

Pianist Frank Kimbrough, bassist Jay Anderson and drummer Matt Wilson came together on 2 nights in July of 2011 to create the songs that make up "Live At Kitano" (Palmetto Records).  As is the pianist's custom, the Trio did not rehearse, had no set lists and there was little discussion of the songs that were to play. One might imagine that is a scary prospect but, when you have been playing music as long as these gentlemen, the results are often magical.

The 60+ minutes on this disc features 3 Kimbrough originals, several jazz standards, and one piece each by Paul Motian and Andrew Hill.  Pieces such as Oscar Pettiford's "Blues In The Closet" swing with a joyous bounce (provided by the bassist for 3 minutes before Wilson enters to provide punch.) Duke Ellington's "Single Petal of a Rose" begins with the bassist reading the splendid melody as Kimbrough colors the music behind him.  Their interplay lasts over half the 9:35 of the tune before Wilson adds even more colors from his drummer's palette.


Kimbrough shines on Paul Motian's "Arabesque" (first released in 2002 on the drummer's Electric BeBop Band's "Holiday For Strings" CD), a beautiful ballad in the drummer/composer's "floating" style.  Anderson's counterpoint and support plus Wilson's "conversational" drumming pulls the listener in.  "Dusk", an Andrew Hill composition from the 2000 Palmetto CD of the same name, allows the Trio to explore the melodic, harmonic and, especially, the rhythmic aspects of the piece.  The program closes with a new Kimbrough composition.  Titled "Hymn", the tune is a soulful, bluesy, even joyous work, that again illustrates the wonderful interplay of the friends and musicians.

"Live at Kitano" is a CD that will give the avid listener much to explore.  From the richly melodic piano of Frank Kimbrough to the splendid bass playing of Jay Anderson to the playful, intelligent, and arresting percussion of Matt Wilson, this is creative, modern yet timeless, music of the highest order.  For more information, go to home.earthlink.net/~fkimbrough/.

The Luce Trio, an ensemble formed by saxophonist Jon De Lucia, has issued its first CD, "Pieces, Vol. 1" (Museum Clausum Recordings); 4 of the 9 works are adaptations of Baroque works by J.S. Bach (3 pieces) and G.F. Handel (1 piece) plus one 2-song medley from the Elizabethan composer John Dowland as well as 3 originals.  The alto saxophonist (he also opens the proceedings on Sruti Box) creates music that moves deliberately, with melodies that are as rich as they are gentle. Joining  him is electric guitarist (co-producer and Mixer) Ryan Ferreira and acoustic bassist Chris Tordini.  The songs, recorded at St. Ann and the Holy Trinity Church in Brooklyn Heights, have an airy feel yet are never insubstantial.

The program opens with the De Lucia original "Chant", which, until I checked the CD cover, sounded to this listener as a variation of Irving Berlin's "Let's Face the Music and Dance" ( I rarely look at the liners or the publicity material until after listening "blind" to the music.) The drone of the Sruti Box sets the tone for the proceedings; no sound is going to be too loud or overplayed.  The Bach pieces are stunning in the Trio's execution.  The descending melody of "Sinfonia 11", with its generous interplay of guitar and bass supporting the alto saxophone, dazzles while "Es Ist Vollbracht" starts as a solo saxophone melody, the notes sustained in the open air of the church.  When the bass and guitar enter, the piece slows down to to the pace of a prayer (the work does comes from the "St. John Passion".)  The CD closes with a short yet wonderful reading of "Jesu Meine Passion."

Luce Trio ("luce" is Italian for light) is anything but light-weight.  This music, so finely created by Messrs. De Lucia, Ferreira and Tordini, shines with intelligence and spirit.  Baroque in many ways (in the years that Bach composed and performed, the ability to improvise was greatly valued), "Pieces, Vol. 1" seems an inappropriate name for music as special as this but do not pass over this gem.  For more information, go to www.jondelucia.com.
Here is "Sinfonia 11" courtesy of BandCamp and Luce Trio: 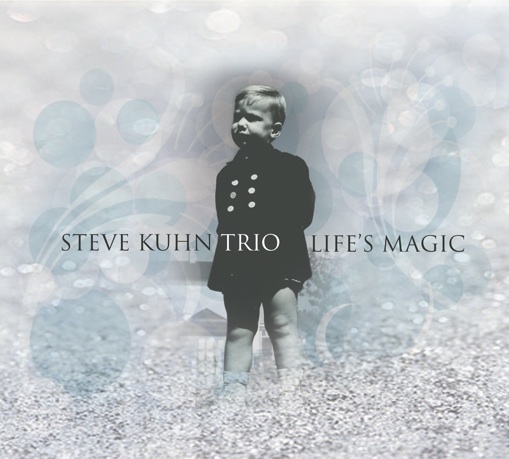 Originally released in 1986 on the long-defunct Black Hawk label, "Life's Magic" is one of the more buoyant releases of pianist Steve Kuhn's career.  Credited to the Steve Kuhn Trio, the CD (now re-issued on Sunnyside Records with 2 additional tracks) was recorded "live" at The Village Vanguard with the sublime rhythm section of Ron Carter (bass) and Al Foster (drums.)  Carter has a big tone which really supports the pianist on his fanciful solos and gives Foster the room to play with abandon (tastefully but definitely playfully.) You can't miss his glee on "Mr. Calypso Kuhn", the effervescent track that closed the original recording. Notice his flashy brush work on Hoagy Carmichael's "Little Old Lady" - his "swing" is contagious and the pianist gladly solos with abandon.   Kuhn has recorded Fats Waller "Jitterbug Waltz" a number of times; this version starts sweetly, going into a long solo from Carter and, when he emerges, he lays down a "walking line" that Kuhn and Foster begin to build upon throughout the rest of the tune.

A short piano solo titled "Ulla" leads into "Trance", a mesmerizing piece Kuhn first recorded in 1974 for an ECM Lp of the same name. Here, the song starts like a lullaby steeped in the blues before taking off on the power of Foster's martial snare drum work and the pianist's staccato chords.  "Yesterday's Gardenias", originally recorded in the early 1940s by Glenn Miller (and another piece Kuhn has recorded several times), is a breezy swing piece that displays both the pianist's wonderful ear for melodic lines and his "bop chops."
The new CD closes with a long (nearly 14 minutes) but musically exciting romp through "Softly, As In a Morning Sunrise" - everybody gets to solo and Foster shines throughout, whether "swinging" with abandon or keeping the tempo flowing, as he does during the bass solo.

I have always enjoyed "Life's Magic" since I first heard it 26 years ago.  It's been a while since I dug out the Lp so this Sunnyside release is like meeting an old friend. If you've never checked it out and you like Steve Kuhn, this is one of his best releases.  If you have never listened to Mr. Kuhn, play this alongside his work with Sheila Jordan, the original "Trance" recording and his 2009 "Mostly Coltrane" release; it will give you a fine overview of a classy pianist who is still in his prime.