"Triveni II" (Anzic Records) is the long-awaited further installment of the December 2009 recording session led by trumpeter Avishai Cohen and featuring bassist Omer Avital and drummer Nasheet Waits. By now, the surprise and joy that I felt from hearing "Introducing Triveni" in September 2010 (read review here) has matured into respect and deep appreciation.  I remain impressed by Cohen's maturation as a musician;  he swings with abandon and his ballad work is emotionally strong.  As of the rhythm section, they push the trumpeter and each other, avoiding cliches and giving their all to make this music original.

"Safety Land" opens the CD on a hard-driving beat and nothing "safe" in the trio's attack.  Also "unsafe" is the bluesy, New Orleans, take on "Willow Weep For Me", perhaps the "hardest" version of this standard I have ever encountered.  The influence of the blues is evident throughout this music including the handsome ballad "Nov. 30th (dedicated to my mother)" - the piece rides in on Avital's shuffle-rhythm, Waits' quiet drum rolls and cymbal splashes while Cohen creates a melody in the trumpet's mid-range, muted, soft yet heartfelt. The rhythm "opens up" in the middle and Cohen's solo is more abstract but the final minute of the piece is a return to the gentle feel of the beginning.

Other highlights include the "deep" feeling of "Get Blue", the fiery take of Dizzy Gillespie's "Woody 'n' You" powered by Waits' insistent drums and Avital's great support plus 2 short pieces from Ornette Coleman, including the unrecorded "Follow The Sound."

If you liked "Introducing Triveni", you'll be greatly pleased by "Triveni II". If you have never heard Avishai Cohen, he's been busy this past decade either as a leader, with his sister Anat and brother Yuval in 3 Cohens, in Third World Love, or a member of the SF Jazz Collective.  If you are a fan of intimate, well-played and exciting creative music, check out the 2 volumes of "Triveni" - this music will make you smile, tap your feet and caress you.  For more information, go to www.avishaicohenmusic.com. 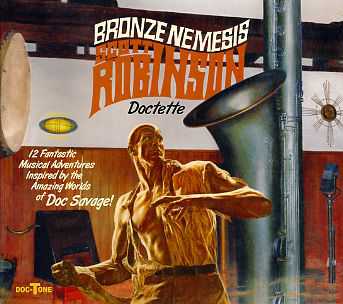 I, for one, have learned never to be surprised by multi-instrumentalist Scott Robinson's imagination.  Over the course of his career, he has played music that ranges from Traditional jazz to bop to orchestral music to electronic music.  He plays just about every reed instrument he puts his hands on as well as synthesizers, various forms of percussion and his trusty theremin.

His new recording, "Bronze Nemesis" (Doc-Tone Records/ScienSonic Laboratories) is a musical portrait of Doc Savage. In the 1930s and 40s, Savage was a "righter of wrongs" who appeared in pulp novels. He was a scientist, inventor, pilot and jazz clarinetist who, while not a "super hero" (with other-worldly powers), used his intelligence and wits to battle evil-doers.  Robinson's musical project made its initial appearance in 2001 as part of a concert sponsored by the New York City-based Jazz Composers Collective. It was not until 2008 that Robinson began recording the CD and 4 more years before its release.

This music is performed by the Scott Robinson Doctette, an ensemble that includes Randy Sandke (trumpet), Ted Rosenthal (piano), Pat O'Leary (bass) and Dennis Mackerel (drums, percussion) - the group's original bassist, Dennis Irwin, who died in 2008, just days before the ensemble was scheduled to record, is featured on "The Golden Man", a solo piece recorded in 2001.

The program opens with the dramatic "Man of Bronze", a classical-influenced rubato piece with sudden shifts in dynamics, powered by Mackerel's drums and Robinson's percussion.  The leader's clarinet and Sandke's trumpet interact with the theremin's mysterious sound on "The Secret In the Sky", an Ellington-style tune that also displays the influence of Sun Ra. Rosenthal shines on "Fortress of Solitude" (yes, Superman had his but Doc Savage had one first) with a fine solo that leads into Robinson's handsome bass sax feature. The leader unleashes a slew of synthesized sounds on "Mad Eyes" before Sandke, Rosenthal and the rhythm section take the piece "out" even further. The interaction of Robinson's slide saxophone (!) and theremin is as fascinating as it is bizarre.

Land of Always-Night" is a quartet piece (no trumpet), a lovely classical-style (think Debussy) melody for flute with smart piano counterpoint.  The flute cadenza is particularly striking.  The 69-seconds of "The Living Fire" features a ferocious tenor and drum dialogue before the Doctette literally explodes into (musical) shards at the end. Robinson unleashes his huge contrabass sax and wind machine plus the massive "treme terra" drum for "The Man Who Shook The Earth", a piece that also includes excellent drums from Mackerel during the very hard-bop section that ends the tune.  The CD closes with "The Mental Wizard", a piece the composer describes as "entirely through-composed, no two measures are the same." Yet, the song has a bass solo, a propulsive swing section with the drums leading, another section where Sandke and Robinson (tenor sax) initially trade "4's" before coming together, an impressionistic piano solo (sans accompaniment) and a blazing full-band finish.

Chances are strong you've not heard a jazz "concept" recording like "Bronze Nemesis" before - yes, there have been numerous concept recordings in jazz since the Paul Whiteman Orchestra's recording of George Gershwin's "Rhapsody In Blue" (1924) but few with such a range of themes and odd instruments.  Scott Robinson knows how to shake and stir the imagination of the listener so, be brave and search out this wondrous aural world.  For more information, venture forth to www.sciensonic.net.
Posted by Richard B. Kamins at 12:39 PM