Pianist-composer Peter Madsen has always impressed me with his musicianship; in group interactions with bassist Mario Pavone or guitarist  Michael Musillami, he is often a driving force with his forceful solos. He is equally at home in "free" sessions as he is in blues-based "swinging" tunes.   Madsen moved to Vorarlberg, Austria, after he getting married in 2000 and immediately got involved teaching and performing.  He assembled a group of musicians, giving them the monicker Collective of Improvising Artists (CIA) and began playing throughout Europe.  Madsen began developing music for string ensembles, discovered a local theater troupe Dante's "Seven Deadly Sins" and decided to work with them.  Thus was born the Seven Sins Ensemble which gave birth to Madsen's new Playscape recording, "Gravity of Love."

The vast majority of the CD is given over to Madsen's "Dante Suite", 7 compositions separated into 3 sections, "Excessive Love", "Deficient Love" and "Malicious Love."  The ensemble features Herbert Walser (trumpet, horns, electronics), Dominick Neunteufel (acoustic bass), Alexandra Lartseva and Monica Tarcsay (violins), Simon Frick (viola, electronics), Bianca Riesner (cello) and the splendid drummer Alfred Vogel. Vogel is quite impressive especially when he is pushing the music or "coloring" behind the strings, he seems to be "right". One of the more pleasing aspects of this music is the different "grooves" Madsen creates; whether it's the straight-ahead jazz of "Excessive Love: 1. Jealousy" or the splintered funk of "Malicious Love: 6. Excessive Desire".

There are so many fine musical moments.  Ms. Riesner's unaccompanied cello introduction to "Malicious Love: 7. Avarice" is a tasty morsel filled with plucked notes and a sly rhythmic pace.  Walser takes a number of excellent solos, none better than his hard-edged lines on "Excessive Love: 3. Rage".  There's the blues-infused "Deficient Love: 4. Indifference" with its heady blend of strings and brass that leads into a  sparkling piano solo and a short yet evocative trumpet spot.

The album closes with "Swiss Chocolate", a tasty confection that helps wash away the memory of all those sins.  Walser takes the first solo, rising atop the percussive piano chords and solid bass work of Neunteufel.  Madsen follows, his dancing lines underpinned by Vogel's active drumming.  Not too sweet, just right, this piece is a pleasing ending to an impressive program.

"Gravity of Love" is built on composer Peter Madsen's reading of "The Seven Deadly Sins" but the music is far from doom and gloom. In fact, this music sings with creativity and lively interplay, the intelligent arrangements setting off the fine solo work.  One can hear that the Seven Sins Ensemble is a real working unit and not just a "studio" creation.  Let's hope we hear more of this band!  For more information, go to www.petermadsen.us.

"Casting For Gravity" (Greenleaf Music) is saxophonist-composer Donny McCaslin's 2nd consecutive "electric album" (and 10th overall as a leader.) Bassist Tim Lefebvre (and his "thick" tone) is back as is the forceful drummer Mark Guiliana (he shared the drum seat on the previous recording with Antonio Sanchez) with producer David Binney returning as well.  Sitting in the keyboard chair is the versatile Jason Lindner (who jockeys between acoustic and electric pianos plus adds much of the synthesizer work.)

This music is perfect for "blasting out of the speakers", thanks to the booming mix of the rhythm section.  There are moments throughout that one can hear the influence of Weather Report, especially in the interplay of the saxophone and synths as well as several of the melody lines, such as the sprightly "Says Who" and the ethereal melody over an intense yet fairly soft rhythm section on "Love Song For an Echo."  McCaslin does not attempt to channel Wayne Shorter; he has his own approach to this "fusion" that blends a strong melodic tendency with a percussive attack (check his fiery interactions with Lindner on the appropriately-titled "Tension".)  The cover of Boards of Canada "Alpha And Omega" lean more towards "electronica" with the saxophone playing a mesmerizing figure but never the melody line while the title track opens in the same direction yet McCaslin has more space to move melodically.  Producer Binney contributes one original track, "Praia Grande", a richly textured track that displays the intensity the composer is well-known for, the rhythm section pushing forward with increasing strength while the saxophonist "wails" atop the counterpoint of the synthesizers and Binney's voice.

"Casting For Gravity" is not music for the faint of heart; it's a striking group effort with compositions and arrangements that asks the musicians as well as the listeners to stretch their minds.  Donny McCaslin is a musician who rarely holds back yet also rarely overplays; his solos display an imaginative architecture that often have an emotional pull far stronger than a technical one.  With this group of Lindner, Lefebvre, and Guiliana plus Binney at the controls, this music soars, rocks, even soothes as it fills a room.  For more information, go to www.donnymccaslin.com. 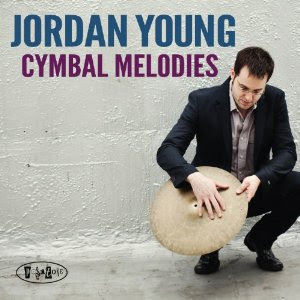 Detroit-native and University of Michigan graduate Jordan Young, drummer by trade, has issued his 2nd CD as a leader.  "Cymbal Melodies" is his debut for Posi-Tone Records and features organist Brian Charette, guitarist Avi Rothbard and, on several tracks, saxophonist Joe Sucato (a member of Young's "working" band.)  The program consists of 6 "standards", a pair of jazz tunes, a cover of The Police's "Roxanne" and 2 original works by the drummer. The CD starts inauspiciously (to my ears) with a "poppy" version Jimmy Webb's "By The Time I Get To Phoenix" (yes, it's already considered a "pop" tune but this version sounds like the band is just getting warmed up.) The Trio stokes the fire much better on "Raindrops Keep Fallin' On My Head" with both Charette and Rothbard responding with plenty of vigor to Young's percussive prodding.  Sucato adds his smooth tenor sax to a swinging take of Lee Morgan's "Free Wheelin'" but it's the excellent organ solo that catches the ear.  Charette also takes the lead on Young's boppish "Bird Bath" (don't think it refers to Charlie Parker) - Rothbard, a native of Israel, digs into a strong solo as well.

Perhaps the most successful cover is the fine re-arrangement of "Roxanne" - the band (Sucato is the lead voice) ignores the Caribbean/reggae rhythm of the original, building the piece on the swirling organ chords and Young's propulsive drums (he particularly shines beneath Rothbard's angular solo.)  There's also a subdued but swinging saxophone-drums take of Irving Berlin's "Best Thing For Me Is You."

"Subdued but swinging" is perhaps the best description for "Cymbal Melodies".  The playing is quite good, the melodies are fine but it all seems to much of a "low-key" affair. However, if you dig the work of Brian Charette, he shines throughout.  For more information, go to www.posi-tone.com.