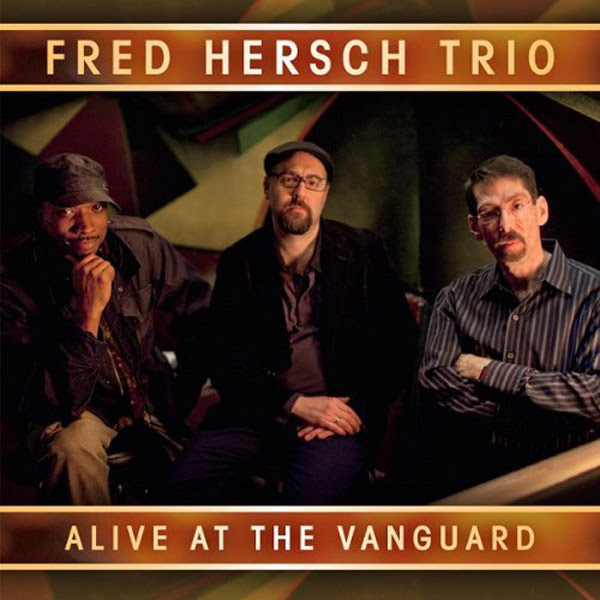 Much of the press that one reads on Fred Hersch concentrates on his recent illness and subsequent recovery (and deservedly so - it's a been a long, harrowing road back.)  After 4 weeks of playing selections from his new double CD, "Fred Hersch Trio: Alive at The Vanguard" (Palmetto Records), it's time to put the talk of his travails away and concentrate on what a fine pianist, composer and bandleader he is.

With bassist John Hébert and drummer Eric McPherson as equal partners in this venture, Hersch's music bristles with crisp interplay, is ripe with fine flights of melodic invention and displays the depth as well as the breadth of Hersch's musical mind.  Recorded during a week of gigs at The Vanguard in February of this year, the material includes classics like Ornette Coleman's "Lonely Woman" paired with Miles Davis's "Nardis", Charlie Parker's "Segment" and Sonny Rollins' "Doxy" (and that's just on Disc 1!) There are 7 Hersch originals, ranging from the ethereal "Dream of Monk" (from the pianist's new major work "Coma Dreams") to the fanciful "Jackalope" (a mythical beast that roams the Southwest of the United States).

Under headphones, one can really hear how responsive the rhythm section is.  McPherson's spare drum work opens the solemn take on Coleman's "Lonely Woman" while his quiet brush work serves as fresh colors on the delicate "Tristesse (for Paul Motian)."  On that same track, Hebert's full-sounding bass lines weave a counterpoint to the pianist's flowing phrases.  The bassist and drummer get to open up on "Segment", creating a underpinning that is both buoyant and propulsive.  "Opener", the first track of the 2nd CD, displays McPherson's excellent ability to push the time without seeming impudent. The dancing rhythms he plays on his cymbals nudge Hersch into a most energetic and entertaining solo (he can most certainly swing!)

The last of 3 tracks that pair tunes, "The Song Is You" is a simple yet beautiful ballad from Jerome Kern and Oscar Hammerstein II (composed in 1932 for the musical "Music In The Air) that segues into Thelonious Monk's faster-paced  "Played Twice" - Hersch's unaccompanied opening is a wonderful 2-handed romp that spans all 88 keys. There are moments when his right hand dances to the highest notes while his left dips down to the keys that control the thicker piano strings .

The finest creative music makes the interested listener want to listen to it time and time again.  On the first few times through "Alive at The Vanguard". you may catch the fine drumming and bass work without appreciating how much piano Fred Hersch is playing.  When the Trio is in high gear, there are moments when it seems each musician playing at his highest level. And there are moments on the ballads when one hears how Hébert is really listening to the chords Hersch is playing and reacting instantaneously with his own melodic invention.  This is music that resonates long after the applause has dies down; this is music that is both exciting and soul-satisfying.

The CD hits digitally and physically on September 11. As I write this, the Fred Hersch Trio has just begun a tour that includes residencies at The Village Vanguard (9/11-16) and Chicago's Jazz Showcase (9/20-23).  After a solo piano tour of England in early October, the Trio will play at Firehouse 12 in New Haven, CT, on October 26.  For more information about these dates and more (including a performance of Hersch's "Leaves of Grass" in Chicago on October 21), go to www.fredhersch.com. To check out the CD, go to www.palmetto-records.com.

Israeli-born, Berklee College-educated and road-tested, Anat Cohen is one of the more vivacious and exciting performers on the music scene. Originally a tenor saxophonist, she has increased her arsenal of reeds to include soprano saxophone and clarinet.

"Claroscuro", her 6th CD as a leader released on her Anzic Records label, features her long-standing quartet of Jason Lindner (piano), Daniel Freedman (drums) and, replacing Omer Avital on bass, Joe Martin. The title of the program refers to the Italian word "chiaroscuro" a painting technique that combines dark and light elements.  Ms. Cohen's music often moves effortlessly from darker, intense, music to pieces that swing with joy or ballads that sway gently.  This CD, self-produced with the aid of Lindner and Freedman, contains music from a wide spectrum including Lindner's percussive "Anat's Dance" that opens the program to the swirling South African rhythms of Abdullah Ibrahim's "The Wedding" that closes it.  In between, guest such as trombonist Wycliffe Gordon and clarinetist Paquito D'Rivera combine their distinctive voices with the quartet to create music that sings, soars, and brings a smile.  Gordon's growling 'bone is a fun foil to Ms. Cohen's raucous clarinet on the ever-so-slow "La Vie En Rose" - the trombonist puts more than just a pinch of Louis Armstrong in his sincere vocal (thankfully, he did not try to channel Edith Piaf.)  He returns on Dr. Lonnie Smith's "And the World Weeps", his unaccompanied multi-phonics introducing the song that soon falls into a slow, New Orleans, drag.  To their credit, the clarinetist (here, it is D'Rivera), tenor saxophonist and trombonist play the melody fairly straight; Gordon's solo sounds like a man fighting the darker forces, blending low guttural utterances with softer, higher-pitched phrases.  D'Rivera enters in a classic Johnny Dodds mode before Ms Cohen's tenor adds a chorus of deeply felt blues playing.

The twin clarinets of Ms. Cohen and D'Rivera do a rousing version of Artie Shaw's "Nightmare", prodded by Freedman's pounding drums, Lindner's rumbling piano and Martin's throbbing bass.  The manner in which the clarinets intertwine is sensual as well as conversational.  Ms. Cohen moves to bass clarinet for her original "Kick Off", a piece for her, D'Rivera and the percussion of Freedman and guest Gilmar Gomes.  Gomes' active percussion takes that piece out and then leads the Quartet plus Rivera into a fiery reading of "Um a Zero", a fine choro from the pen of Pixinguinha, a flautist/saxophonist/composer active in Brazil through the middle decades of the 20thy Centur. Gomes also appears on "Tudo Que Você Podia Ser", another Brazilian composition, this one composed by and made famous by Lô  Borges. Here, it is Ms. Cohen's expressive soprano saxophone dancing atop and alongside the dancing piano of Lindner.

"Claroscuro" shines brightly with its intelligent variety of rhythms, melodies, and superb interplay.  Anat Cohen and these fine musicians play with such exuberance and soul, it's hard not to move your feet on the faster tunes and lean in closer on the ballads. Having seen Ms. Cohen on a number of occasions in various ensembles that she has led or co-led (3 Cohens, with her brothers Yuval and Avishai), she always gives a maximum effort - this CD, scheduled on September 25, is yet another excellent example of her prodigious talents.  For more information, go to www.anatcohen.com or anzicstore.com.

The sackbut is the earliest form of that wondrously ungainly instrument known as the trombone (though it's also the name give to a stringed instrument found in the Bible.)  Trombonist/composer Joe Fiedler has organized a quartet that features 3 'bones (Fiedler, Ryan Keberle and Josh Roseman) and the rhythm section of Marcus Rojas on tuba.  Methinks one might expect the group's debut CD, "Joe Fiedler's Big Sackbut" (Yellow Sound Label), to be a noisy assemblage; actually, the program covers a wide swath of musical territory with pieces that range from the richly melodic tribute "Don Pullen" (soulful music with a touch of gospel) to the bluesy swagger of "Blabber and Smoke" (composed by the le Don Van Vliet - Captain Beefheart to his fans) to the highly rhythmic adventure that is Willie Colon's "Calle Luna, Calle Sol."  On the last track, Rojas moves easily from being the rhythm instrument to playing counterpoint.  Hard not to enjoy the ensemble's spirited take on Sun Ra's "A Call for All Demons"; the brasses gentle yet forceful (is that possible? listen and decide) performance highlights the melodic side of the composer/space adventurer (the composition dates back to 1960.)

More highlights include the leader's handsome solo on "#11" and Rojas's long, low, tones that lead in "Ging Gong" (his solo in the middle of the track is joyful and quite melodic.)  The foursome's interaction on the CD closer "Urban Groovy" sounds as if they are effortlessly gliding across a ballroom dance floor.  The muted trombones on the opening section of the leader's "The Crab" feel like heraldic trumpets and move the piece along to a fine melody with hearty as well as heartfelt solos from Fiedler and Roseman.

One might look upon "Joe Fiedler's Big Sackbut" and think that there's not much of a sound palette. You should be quite surprised and pleased at how this music moves gracefully and melodically throughout the 10 tracks; yet the pieces also take many rhythmic paths during the program. No doubt about it, this CD is a "wind-win" situation.  For more information, go to www.joefiedler.com.
Posted by Richard B. Kamins at 5:23 PM