Summer is a good time for road trips, even if gas prices are high (you just don't go as far.) If you're willing to head to the (Litchfield) hills on Tuesday July 10, you can catch a free concert at The Hotchkiss School's Katherine M. Elfers Hall featuring the Michael Musillami Trio.  The guitarist/composer, who teaches at the school during its normal schedule, brings his good friends Joe Fonda (bass) and George Schuller (drums, hat) and they'll play music that spans the decade the Trio has been together.  The compositions are filled with intelligent melodies, strong harmonies and plenty of room for the musical give-and-take that is a trademark of the MM3. Over the 10 years, the Trio has released 6 CDs (all on the guitarist's Playscape Recordings label), 3 with expanded lineups.

The concert starts at 7:30 p.m.  For directions, go to hotchkiss.org.

Clogs, the musical ensemble that began its existence in New Haven nearly 13 years ago, comes home to play at Firehouse 12, 45 Crown Street.  The group - consisting of original members Padma Newsome (piano, ukulele, violin, voice), Rachael Elliott (bassoon), Thomas Kozumplik (percussion) plus guests Ben Cassorla (guitar) and Lorne Watson (percussion) - will be playing music from its latest project, "Shady Gully", music inspired by the area around composer Newsome's hometown of Mallacoota, Victoria, Australia. Normally a quartet (guitarist Bryce Dressner, the other original member, is away for this tour), the band came together at the Yale School of Music, creating original music that had roots in classical, folk traditions, indie rock and more.  The earlier recordings contained mostly instrumentals but they added vocals for "The Creatures in the Garden of Lady Walton" project in 2010 (they also produced a recording of instrumentals, "Veil Waltz", as a prologue for the project.) You can hear all of their recordings by going to clogs.bandcamp.com.  To purchase tickets for the Firehouse 12 date, go to firehouse12.com or call 203-785-0468. 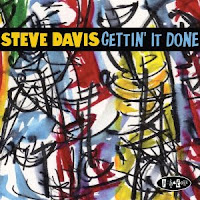 Trombonist-composer-educator Steve Davis teaches at Hartt School of Music's Jackie McLean Institute and The Artist Collective.  Mentored by saxophonist McLean, Davis (born in Binghampton, NY and raised in Worcester, MA) stayed in Hartford but has traveled around the world.  He was in the final edition of Art Blakey's Jazz Messengers, toured and recorded with Chick Corea's Origins band and is an original member of One For All.  "Gettin' It Done" is his 3rd CD for PosiTone and does not stray far from the hard-bop swing that animates much of the trombonist's recordings.  It marks the 9th time Davis has led or co-led a session with alto saxophonist Mike DiRubbo.  Also featured on the recording is several other long-time associates, pianist Larry Willis and bassist Nat Reeves.  Rounding out the crew is 24-year old drummer Billy Williams and recent Hartt School alum Josh Bruneau on trumpet and flugelhorn.

The title tell its all - the band "hits" from the first note and never loses its focus.  Opening with John Coltrane's "Village Blues" (from the 1960 "Coltrane Jazz" Lp), the music is blessed by the leader's warm tones and willingness to share the spotlight.  Willis's rich chords lead the piece in, Reeves and Williams lock into the grooves and the front line presents the sweet melody (which would have sounded out of place on "Kind of Blue.") The leader takes the first solo; his winning combination of his sweet tone and smart improvisations lead to DiRubbo's mellow-with-an-edge alto solo. But the surprise here is the dynamic work of young Mr. Bruneau.  Throughout this program, his clear, clean, sound and feisty attack is a treat.  His funky approach on Davis's "The Beacon" shows the influence of Freddie Hubbard while the "groove" should remind listeners of The Crusaders.  Williams does not settle into the groove; instead, he pushes the piece forward while Reeves' strong bass support along with Willis's bright chords gives the piece its shape.

Other highlights include the sprightly "Sunny" (yes, the tune by Bobby Hebb) with its joyful interplay of trombone and trumpet as well as the lovely and lyrical "Wishes" that closes the program. The latter opens with the leader and DiRubbo playing the handsome theme leading into a long piano excursion from Willis.  The pianist is a masterful accompanist while every one of his solos seems to dance atop the beat with glee (he puts the dance steps into "Steppin' Easy" and the fire into "Longview.")

Steve Davis is one of the people who makes music that reflects his true being;  to wit, the music on "Gettin' It Done" is bright, highly rhythmical and melodic, never pushy or condescending.  The band is sharp and attentive, the solos almost always impressive and one feels quite satisfied after spending tine with this music.  For more information, go to www.stevedavis.info.

Here's the title track for you to download, courtesy of PosiTone Records and IODA Promonet:
Gettin' It Done (mp3)

I trust you are keeping up with The Jazz Session, the fine music interview podcast produced by Jason Crane (the 3 most recent posts are on the top right of this column.)  Then, you are quite aware of his "Jazz Or Bust" tour that has finally reached New Orleans, the ultimate destination of the initial leg of the venture.  My recommendation is that you go to jasoncrane.org to read his posts about the sights, sounds, and emotions of a journalistic hiker in search of the people who create the music we know and love as jazz.  But there's more to his writing than music - Mr. Crane is a poet, a musician with words as his instrument.  In other ways, this journey is one of self-discovery, not often easy or satisfying but educational for the soul.  Give him an ear and an eye; there's much to hear and see.
Posted by Richard B. Kamins at 8:53 PM