A Week of Picks (Wednesday) 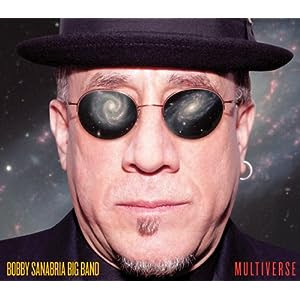 If you stare long enough at the cover of this CD, you realize that its creator, percussionist/composer/educator Bobby Sanabria, always aims for the stars.  Whether leading his own ensembles or the students who make up the Manhattan School of Music Afro-Cuban Jazz Orchestra, Mr. Sanabria does not settle for the mundane or just plain good.  Within the first minute of "Multiverse" (Jazzheads), the new recording by the Bobby Sanabria Big Band, you know you have to fasten your seat belts; this 19-piece ensemble (plus vocalists) is in hyper-drive.

Born and raised in the South Bronx (in the "Fort Apache" area), Sanabria graduated from the Berklee School of Music.  He became an in-demand studio musician, also serving as the drummer in Mauro Bauza's Afro-Cuban Jazz Orchestra.  He has since gone on to lead and record with the Quarteto Aché and his Big Band. This new CD, his 3rd with the large ensemble, ups the ante by integrating electronics, hip-hop, rap and more.  Opening with "The French Connection", written for the movie by trumpeter Don Ellis, after the initial percussive flourish, the band comes roaring in. Leo Traversa's throbbing electric bass lines rumble beneath the percussion as Danny Rivera leads the way on electric baritone saxophone.  When the trumpets come screaming in, the house begins to shake. "Chacita", composed by the great Puerto Rican songwriter Rafael Hernandez (who toured with the James Reese Europe Band), is an absolute "smoker" with fiery solos from saxophonists John Beaty (alto) and Jeff Lederer (tenor).   The ensemble returns to the movies for a handsome version of "Over the Rainbow", with the brass leading the way to a fine vocal from Charenee Wade with Norbert Stachel's flute, Enerique Hainene's piano and the trumpet section giving excellent support.

There is not a weak cut among the 10 tracks.  One of the most impressive works is the "Afro-Cuban Jazz Suite for Ellington", an impressive aural collage created by Michael Philip Mossman. There are excerpts from "Black and Tan Fantasy", "Lotus Blossom", "I've Got It Bad (and That Ain't Good"), "It Don't Mean a Thing (If It Ain't Got That Swing"), "Satin Doll" and more in the nearly 14-minute run.  Solos are short and uniformly excellent (the entire trumpet section gets 1/2 a chorus spotlight on "Satin Doll");  drummer Sanabria joins conga drummer Cristian Rivera for an explosive finish to the medley.  Add to that saxophonist Lederer's smart arrangement of Wayne Shorter's "Speak No Evil" which features a hearty solo from tenor saxophonist Peter Brainin, splendid bongo playing from the leader and a short rap from La Bruja that celebrates Mauro Bauza, Tito Puente, Dizzy Gillespie and the Bobby Sanabria Big Band (whose music shows the influence of the 3 men whose names preceded it.)

There's much more to capture your attention (including the funky barn-burning finale "The Chicken/From Havana To Harlem - 100 Years of Mauro Bauza"); believe me. if you turn up the volume when you put on this CD, you'll be wringing sweat from your shirt before the first ballad. The rhythmic drive on this recording is life-affirming and, when you add the rock-solid bass of Leo Traversa, sitting still is not an option. "Multiverse" hits the streets on August 14 - do not pass it by.  For more information, go to www.bobbysanabria.com.
Posted by Richard B. Kamins at 12:40 PM