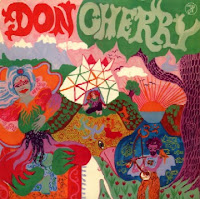 Like many jazz fans, I first encountered the music and sound of Don Cherry (1936-1995) through his work with Ornette Coleman. After he left the Coleman Quartet, he recorded 3 fascinating Lps for Blue Note ("Complete Communion", "Symphony for Improvisers" and "Where is Brooklyn?").  In 1969, he joined his friend from Coleman's group, the drummer Ed Blackwell, to record the classic "Mu" duets.

As a creative music neophyte in the early 1970s, I devoured the Ornette Coleman Atlantic recordings and was puzzled by the more avant-garde work Cherry did for Blue Note.  Still, I liked Don Cherry's sound and trumpet work so I purchased "Organic Music Society" (Caprice Records) in 1973 without having heard a note.  Recorded with an international lineup, including percussionist Nana Vasconcelos, percussionist Bengt Berger and drummer Okay Temiz and a host of others (including a Swedish Youth Orchestra), "OMS" is a collection of chants, field recordings, meditations, and much more - it was so different than his "American" work that this listener was taken aback.  Putting it on the back shelf, it wasn't until Don Cherry's death in 1995 that I remembered its existence.

In 2012, "Organic Music Society", originally a 2-Lp set, has been issued by Caprice Records as a single 80-minute CD.  The handsome booklet includes the original liner notes by Swedish jazz writer Jan Bruér and a new essay from John Corbett.  As for the music, it's still the incredible mish-mash I encountered all those years ago but my ears are now more attuned to (and my mind more accepting of) sounds such as these.  Long pieces such as "Relativity Suite Parts 1 and 2" flow with Cherry's vocal/chants and recitations floating above the percussion. With log drums and mridangam creating a swirling undertow, Cherry sings and preaches.  "The Creator Has A Master Plan" builds off the leader's piano work into a driving mantra, not unlike the original Pharoah Sanders version.  Admittedly, the 12:25 "North Brazilian Ceremonial Hymn" that opens the recording still goes on way too long and the sound of the "location" recordings leaves a lot to be desired, there are many other moments where the gentle voice, piano, lively percussion, and joyful grooves fill the room. There are also several flashes of the wonderful trumpet sound that Cherry was known for.

"Organic Music Society" is very much a product of its time, a snapshot of the gypsy musician that Don Cherry had become after leaving the United States. Approach the recording with open ears as well as an open mind, you can react with glee.  (Writer's note - I can not find a working website for Caprice Records so, when and if you look for more information about this CD, you may only find on-line retailers.) 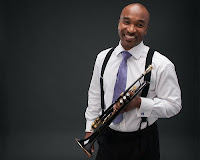 Abram Wilson, born in the United States, moved to London, England, in 2002 and, over the next decade, made quite a name for himself.  Raised in New Orleans, he attended NOCAA (the New Orleans Center for Creative Arts) as a teenager and earned a music scholarship to Ohio Wesleyan University.  Wilson went on to study at the Eastman School of Music in Rochester, New York; after graduation, he moved to New York City, formed his own band and worked with numerous ensembles. Yet, he came into his own once he crossed the Atlantic Ocean, issuing 3 CDs as a leader as well as working with saxophonist/composer Soweto Kinch.  Wilson was interested in education, making sure to work with younger musicians and school children wherever he toured.

In early June of this year, Abram Wilson was diagnosed with cancer and died just 3 days later (June 9) at the age of 38. Prior to his passing, he was working on several projects including "Running With the Flame" (scheduled to debut at the London Olympics this summer) and "Philippa", the musical biography of Philippa Schuyler (1931-1967), a composer/pianist whose musical career suffered due to racial prejudice and she turned to journalism.

Wilson's widow Jennie has established the Abram Wilson Foundation and a Kickstarter campaign to not only continue his educational work but also to fund a full production of "Philippa."  You can find out more by going to abramwilson.com.  I also recommend that you find his CDs on the Dune label, especially "Ride! Ferris Wheel to the Modern-day Delta" (2006) and "Life Paintings" (2009).  One can hear the Crescent City influence in his sound; at times, his smooth tones resemble those of Wynton Marsalis. Yet, his best work displays touches of Clifford Brown and Booker Little in his crisp lines and clear tones.  Taken way too young, Abram Wilson did much to make this world a better place and will be sorely missed.
Posted by Richard B. Kamins at 5:58 PM