The Uncertainty Music Series, created and curated by composer Carl Testa, welcomes the Scott Clark 4tet to Elm Bar, 372 Elm Street in New Haven on Wednesday May 9 for a 9 p.m. show.  Last week, I wrote about the group, led by drummer-composer Clark and based in Richmond, Virginia, and, since that time, have had the opportunity to hear the recording that is in search of a label. The 4Tet's music is fiery, punchy, thoughtful and thought-provoking and, at times, great fun.  Composed of drums, bass, saxophone and trumpet, the music has its roots in the experimentations of the Ornette Coleman groups of the late 1950s and early 60s.  But, Clark is definitely the leader, with many of the songs building up from the drums (setting the pace and the mood).  All the members are fine soloists and this is music with plenty of substance and little filler. According to Clark's website (scottwclark.wordpress.com), the second set "will be the second performance of our suite of music based off of the book “Bury My Heart at Wounded Knee” by Dee Brown and on my own research into my family history."

On Saturday evening May 12, the Series moves to Neverending Books, 810 State Street in New Haven for a performance by the duo of Christopher Riggs (guitar) and Carl Testa (bass, electronics).  The sounds commence at 8 p.m.  To get a taste of the duo's collaborations, click here.  For more information about the series, go to uncertaintymusic.com.

Those of us who love adventurous music have a difficult decision to make on Friday May 11. We must go to New Haven and choose between Matt Wilson's Arts & Crafts (performing at 8 p.m. in Yale University's Morse Recital Hall, 470 College Street or Michael Bates Acrobat: Music By and For Dmitri Shostakovich at 8:30 p.m. in Firehouse 12, 45 Crown Street.  Drummer-composer-educator Wilson and A&C are the concluding concert in the 2011-12 Ellington Jazz Series at the University's School of Music.  The group includes Michael Rodriguez (trumpet, subbing for Terrell Stafford), Martin Wind (bass) and Gary Versace (piano, organ, accordion.)  "An Attitude for Gratitude" (Palmetto Records), the band's 4th CD,  continues Wilson's quest to create music that is approachable without being sappy or programmed.  To find out more about the concert, go to music.yale.edu or call 203-432-4158. 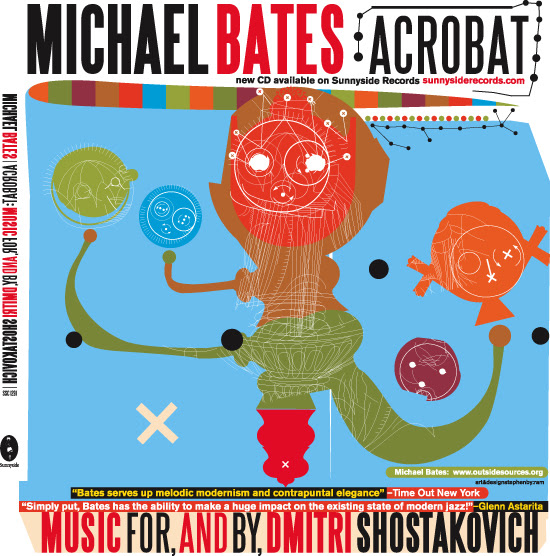 Meanwhile, the Vancouver, Canada, native Michael Bates (bass) brings an accomplished group to the Firehouse for an evening of fascinating music.  Joining him will be Russ Lossing (piano, Fender Rhodes), Greg Tardy (clarinet, saxophone), Russ Johnson (trumpet) and Michael Sarin (drums) and they will explore
music the bassist composed after studying the 20th Century Russian Shostakovich (1906 - 75).  The latter was quite a figure in the last century, creating music that reflected the changing society in which he lived.  Much happened to him and around him and he often had issues with the Soviet officials. On one hand, he composed "serious" music, filled with myriad influences (and certainly some of them were European) but also felt forced to compose "nationalistic" works.  By the early1960s, Shostakovich wrote darker works, including his "13th Symphony - Babi Yar" based on the poems of Yevgeny Yevtushenko that look at the oppression and slaughter of Russian Jews.

Bates' music makes great use of Lossing's atmospheric Fender Rhodes, Sarin's explosive drumming and the blend of reeds and brass.  The music can be quite serious; yet there is also a playful edge to certain pieces. Jazz lovers will enjoy the interplay, the melody lines played by 2 or more instruments that come together and move apart.  Bates and Acrobat play 2 sets, 8:30 and 10 p.m. - for tickets and more information, go to firehouse12.com or call 203-785-0468.

This Saturday (May 12) at 2 p.m., Joe Morris (guitar) and Stephen Haynes (trumpet, cornet) present "Improvisations VIII", the latest in the duo's ongoing series at Real Art Ways, 56 Arbor Street in Hartford.  Joining them will be Jason Kao Hwang (violin, viola) and New Haven resident Nathan Bontrager (cello).  Hwang has been active of the jazz/new music scene for 3 decades, working with artists such as Professor Anthony Braxton, Henry Threadgill, and bassist William Parker as well as leading or co-leading numerous ensembles (several that feature New Haven-based cornetist Taylor Ho Bynum.)  Bontrager just played this past weekend as part of Broadcloth (in the Uncertainty Music series) and in the ensemble behind vocalist Anne Rhodes.  For more information about "Improvisations" and ticket availability, go to www.realartways.org.

Pianist Bill Carrothers makes his home on the Upper Penisula of Michigan, not a place to settle down if you plan on pursuing a busy career in music. But, busy is in the eye and mind of the beholder. Mr. Carrothers has a wicked sense of humor which is on display at his electronic home - www.bridgeboymusic. His CDs range from trio explorations of the music of Clifford Brown to songs from the Civil War played as solo piano pieces to larger group takes on the songs from World War I.  All these creative efforts do not make for great commercial success. Yet, I'll lay odds Carrothers does not really care about the hoopla of success.

His new CD, "Family Life" (Pirouet Records), is comprised of 15 pieces for solo piano and may bequietest music you'll hear this year.  Yet, the intensity of melody and emotion that one hears in this music will touch you long after the last notes fade.  Like the snapshots on the cover, the stories implicit in the music are of nights spent around the dinner table, of days walking in the woods, of sitting on a chair after the children have gone to sleep and listening to them breathe, of memories of parents and relatives who shape your life even after passing.

It does not pay to  explain the individual tracks; every listener will hear something in this music that will resonate in his or her life (I would be surprised if you could not or did not connect with this music.) Shut off the lights, turn off the computer, open the shades, relax -you might even fall asleep - but do not sleep on this music, an oasis in an ever-maddening world.  Check out Bill Carrothers website (listed above) or go to www.pirouet.com/home/album.php?release=PIT3063 to hear for yourself.