Lots of Listening To Do (Part 1) 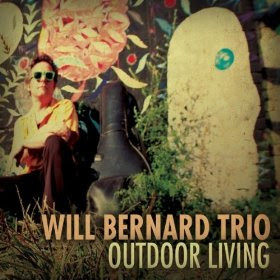 "Outdoor Living" (Dreck To Disk Records) is the latest CD from the Will Bernard Trio, a funkified set of instrumentals that will rattle the speakers and shake your soul.  Guitarist Bernard, Hammond B-3 specialist Will Blades and drummer Simon Lott sound like they are having more fun that is legally possible. The music hearkens back to the Memphis soul sounds of Booker T & The M.G.s, to the sweet percolating rhythm section of Hi Records, to the 60s soul/rock of Sly & The Family Stone.  The Trio has chops to spare but this is "attitude" music, from the spacy yet hard-edged "Roaming Charges" to the "retro soul" of "Morgan Deux" to the blues-drenched "Nooksack" (Bernard plays some seriously "mean" slide guitar) to the Dixie-fried "Katskan" (New Orleans meets Atlanta) to the appropriately titled "Squeaky Chug Chug".  Will this music change the world?  Perhaps not but it does have the power to adjust your mood, especially if you're in a bad way.  Put on your dancing shoes and play it loud.  For more information, go to www.willbernard.com.

Minnesota-native John Raymond is a fine trumpeter, a burgeoning composer and an active sideman. "Strength & Song" (Strength & Songs Records) is his debut as a leader (he did produce an EP in 2008);  here, he has assembled as impressive group to play this music including Gilad Hekselman (guitar), Javier Santiago (piano, Fender Rhodes), Raviv Markovitz (bass) and Cory Cox (drums) with guests Gerald Clayton (piano) and Tim Green (alto saxophone). Clayton contributes his lyrical piano to "Onward", a medium tempo piece built on the active drums and bass with Hekselman's ringing guitar tones and the leader's straight-forward trumpet (by that, I mean he is neither flashy nor prone to bluesy smears to fill out lines.)  After an exciting finish, Raymond supplies Clayton with "Onward Outro", a lovely solo piano piece as soothing as spring rain. Raymond and company breathe new life into Joe Henderson's "Isotope";  right from the opening trumpet/drums dialogue, the music swings sweetly.   "The Rock" is a harder piece, Hekselman's guitar tone reminiscent of Kurt Rosenwinkel;  his solo twists and swirls, rising above the insistent drums and propulsive bass. Raymond digs in, really pushing the band even as he delivers his brass sermon.  The trumpeter's religion is very important in his life and music.  Several pieces, such as the peaceful "O Come, O Come Emmanuel", the Pat Metheny-Lyle Mays influenced uptempo drive of "Motivations of a Pharisee" (fine solo from Tim Green) and the specific dialogue on "Psalm 37:Anthem", which speaks to the importance of Raymond's faith to his music, his mission and how he lives his life. Raymond's interplay with Santiago on the ballad "The Poor Blind Man" is quite nice; the piece also has room for a melodic bass solo and striking guitar work (Hekselman is impressive throughout the program.)

"Strength & Song" is good, honest, heart-felt music.  John Raymond's compositions show his intent to continually move forward as a musician and person.  Search out this music and you'll be richly rewarded.  For more information, go to johnraymondmusic.net. 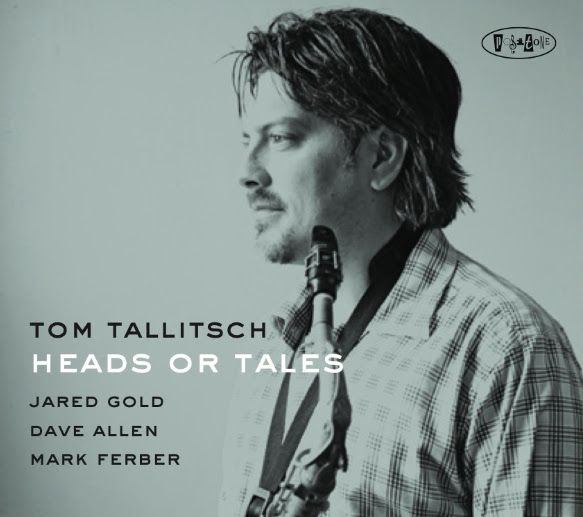 For "Heads Or Tales", his 4th CD as a leader (and first for PosiTone Records), tenor saxophonist Tom Tallitsch convened a group that features Jared Gold (Hammond B-3), Dave Allen (guitar) and Mark Ferber (drums).  Gold's fine organ work, paired with Allen's strong single-note lines and supported by Ferber's insistent percussion, truly set the stage for this music.  Tallitsch has no issue with sharing the spotlight so every player gets his due. Allen shines each time he gets to solo, no more so than on "The Lummox."   Tallitsch's tenor style hearkens back to the sounds of early John Coltrane and Don Byas.  You can hear a blues tinge yet he never overplays or just "blows" - his solos "sing", even on faster tracks such as the high-speed drive of "Double Shot" or the funky, James Brown-influenced "Flat Stanley."  The ballads, especially "Perry's Place", show a tone as sweet as Lester Young and melodic inventions in the manner of Ben Webster.  Yet, Tallitsch is neither a traditionalist nor a throwback.  The rhythms that Gold and Ferber create for these original pieces (the sole exception, the emotionally charged ballad reading of Neil Young's "Don't Let It Bring You Down") are up-to-date without kowtowing to "trendiness."

No need to flip a coin, "Heads Or Tales" is a winner any way you listen to it.  I continue to be impressed with Jared Gold's versatility and Mark Ferber's stunning percussion while Dave Allen, who has released several CDs on Fresh Sounds New Talent, adds a sound that works well with the organ and tenor (his rhythm work is also quite good.)  Tom Tallitsch has created a strong program with a group that would "burn down the house" in a club setting.  For more information, go to www.tomtallitsch.com. 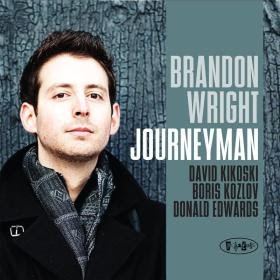 "Journeyman" (PosiTone Records) is only Brandon Wright's second CD as a leader yet he sounds like a veteran. He's aided on his musical trek by his mates from the Mingus Big Band, David Kikoski (piano), Boris Kozlov (bass) and Donald Edwards (drums).   The program is a blend of 6 originals and 4 covers, 3 of which are quite unexpected.  "Better Man" is an Eddie Vedder tune, written for his band Pearl Jam - Wright digs into the melody and pushes it hard, spurred by Edward's fine drumming. "Wonderwall", written by Noel Gallagher and recorded by his band Oasis (a year after the Pearl Jam tune) has a good melody that allows Wright and company plenty of leeway to play with tyhe dynamics. Kikoski excellent solo sets the stage for Wright's impassioned spot (Kikoski has quite a way with "pop" tunes - his reading of Brian Wilson's "Surf's Up" which he recorded for CrissCross is brilliant.)  The program closes with a uptempo read of "He'll Make Me Happy" from "The Muppets Take Manhattan."

Other highlights include the sweet ballad "Illusions of Light", which opens with Wright unaccompanied strolling through variations on the melody he plays when the rest of the quartet enters.  Kikoski moves to electric piano for "Search For Truth", a medium tempo piece with excellent work from Edwards (who really controls the dynamics of the song.) "Big Bully" has a scorching opening riff for saxophone and piano then moves right into overdrive for the solos.  Here, Kozlov and Edwards propel the piece; Wright and Kikoski handle the changes with aplomb.

Brandon Wright and his fine colleagues have created a very good recording, with melodic and rhythmic variations galore.  The solos are uniformly strong and the rhythm section is both supportive and challenging.  Does not hurt one bit that David Kikoski is Wright's partner on the front line as he is one of the more accomplished pianists on the scene today.  "Journeyman" is satisfying music that gets better each time you listen.  To find out more, go to www.wrightjazz.com.

Here's an uptempo taste, courtesy of PosiTone Records and IODA Promonet:
Shapeshifter (mp3)
Posted by Richard B. Kamins at 7:31 PM