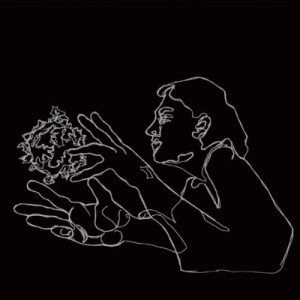 Alexander Berne is a musician/conceptualist who began his career as a jazz saxophonist who left the music world for over a decade and became immersed in the world of art.  Still, music filled with his mind but not the jazz he had been playing.  Now, he heard new instruments and, acting on his instinct, started to build a collection of reeds (for instance, there is a reed slide trumpet and a "saduk" that is a cross between a saxophone and a daduk, a double-reed pipe) that would create the myriad sounds he was imagining.   Wine glasses, vacuum cleaner, prepared piano, specially tooled pipes, and much more become the rhythm section and front lines in this project. Calling his one-man operation the Abandoned Orchestra may suggest a desolate aural landscape but this program is so much more than that.

"Flickers of Mime/Death of Memes" (Innova) is the result of months creating sounds, mixing concepts, and being patient.  And the listener must be patient as well.  There is a story line in the notes but my suggestion is to first approach these 2 discs with open ears.  The music , can be quiet with flowing lines that do not suggest recognizable melodies-yet, there are moments on the first disc when the rhythmic patterns suggest African rhythms meshing with the sounds of a gamelan.  "Flicker III" conjures up the percussive experiments of Peter Gabriel in the 1980s while "Flicker IV" blends flute, saxophone and homemade reeds in a trance-like East Asian style.  There are places when the percussion swirls, the reeds moan and swoop upwards and sounds enter from all sides, when a piano line will rise out of the aural stew and then be covered by random noises. The percussive drive on "Flicker VIII"  beneath the dervish-like reed lines and keyboard swirls bears a strong resemblance to The Beatles' "Tomorrow Never Knows" while "Flicker X" channels Phillip Glass.

"Death of Memes" (Disc 2) begins with ominous percussion and an indeterminate direction but, as the piece moves forward, one hears the melodic fragments rise out of the mist, piano figures that recall Appalachian banjo lines and reeds that reflect the music of India and the Far East. There is a solemn beauty to the softness of "Meme III" while  "Meme V" has rotating reed lines over a drone that remind this listener of the Muslim call to prayer blended with traditional South Indian melodies. "Meme VI" is a darker work; now the drone swells while the melody is a low, keening, wail.  The steady drum beat (the heart) of "Meme VIII" fades in and out as the reeds rise and fall - we are walking through a sonic rainforest that is unfamiliar yet not uncomfortable.  "Meme IX" is the closing prayer rising to an unseen power that reaches a peak then slowly fades to silence.

With "experimental" music such as this or certain works of Terry Riley, it takes the listener a while to find the emotional heart and, yes, this is an emotional experience.  Alexander Berne is not concerned with displaying technical prowess, with reworking the ideas of other people.  Like John Cage, Anthony Braxton, Henry Threadgill and the author James Joyce, he has created a language that is all his own from what has come before. "Flickers of Mime/Death of Memes" is an adventure and a wondrous one at that.  For more information, go to alexanderberne.com.
Posted by Richard B. Kamins at 11:11 PM