Saxophonist-composer Marty Ehrlich brings his Rites Quartet to Firehouse 12 in New Haven this week (11/11/11) for 2 sets, 8:30 and 10 p.m. Ehrlich, a native of St. Louis, Missouri, has been involved in the creative music scene since his teen years when he performed with the Human Arts Ensemble, an improvisatory group with a similar approach to the Art Ensemble of Chicago.  After attending the New England Conservatory of Music in Boston, Ehrlich (a fine clarinettist as well as an  excellent alto saxophonist) moved to New York City.  Over the past 3+ decades, he's worked and recorded with Muhal Richard Abrams, Oliver Lake, Anthony Braxton, Leroy Jenkins, Myra Melford and Julius Hemphill.  His association with Hemphill(1938-1995) still resonates in Ehrlich's music, through his passionate musicianship, the blues-soaked melodies and the exciting, challenging, ensembles that he leads.

The group he brings to the Elm City - cellist Erik Friedlander, trumpeter Ron Horton and drummer Ben Perowsky - plays music that hearkens back to and expands upon the music Hemphill created for his ground-breaking "Dogon A.D." Lp.  The blend of Ehrlich's plaintive alto sax and the fullness of the cello lines is complimented by the sharp brass and exciting drumming.  The quartet's 2009 debut CD, "Things Have Got To Change" (Clean Feed), featured Freidlander, trumpeter James Zollar and drummer Pheroan akLaff, is a splendid recording that includes 3 pieces from Hemphill.  For ticket information, go to firehouse12.com or call 203-785-0468.

Upon initial listening to "Pink Paradise" (Naive), the 2nd CD by the French "power trio" Sidony Box, I heard parallels to the music of the late drummer Tony Williams' Lifetime. That group,featuring the powerful guitar work of John McLaughlin and the fiery organ of Larry Young, took its cue from the electric fusion of Miles Davis and moved it even further "out."  Instead of organ, Sidony Box utilizes the melodic alto saxophone of Elie Dalibert yet one can connections to Lifetime in the excellent guitar playing of Manuel Adnot and the colorful, inspired, drumming of Arthur Narcy.  There are several pieces, including the opening track "Last Star", where the Narcy is the lead voice (without being a soloist) for long stretches.  His "machine gun" snare and pounding floor tom lead the way on "Suédois", a powerful work framed by Adnot's guitar with an emotional alto solo.  "Léman" is reminiscent of John Abercrombie's "Timeless";  this is a soft meditative work that moves slowly over its 10 minutes, the volume rarely rising above a whisper. That is followed by "Ultimate Pop Song" which also takes some time before the volume picks up but turns out to sound like its title, with a handsome melody played by alto and atmospheric guitar.

The propulsive "Tatooine" , the punkish "TMNT", the incendiary "Suédois"  and the squalling "Wilson" (hints of "death metal") led me to make the Tony Williams' Lifetime connection.  And when Sidony Box changes gears, the contrast is delightful. Altogether, "Pink Paradise" is, at times, noisy but always entertaining. To hear for yourself, go to en.naive.fr/#/artist/sidony-box. 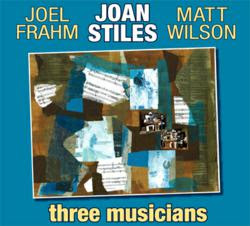 I must admit that I am always pleased to see the names of Matt Wilson (drums) and Joel Frahm (tenor saxophone, soprano saxophone) on the cover of recordings. Both are exhilarating, expansive, musicians who play with a seeming ego-less blend of intelligence and wit.  And, you will discover by the end of the first few tracks, so does the leader.

Brooklyn, NY, native Joan Stiles (piano) started out playing guitar in her teenage years but soon moved to keyboards.  Later, after starting a family, she went back to school to study classical music and soon began studying jazz piano with Dick Katz and, later, with Harold Danko.

"Three Musicians" (Oo-Bla-Dee Music) is her 3rd CD.  10 of the 12 tracks are standards with one, "In the Sunshine of My Funny Valentine's Love" that is a snappy mash-up of Cream, the Richard Rodgers' melody from "Babes in Arms" and a theme from J.S. Bach. The other catchy medley, "Brother, Can You Spare a Dime" paired with "Can't Buy Me Love" may sound like a "cutesy" idea but is really inspired and downright fun.  The 3 tracks in the middle of the program - "All The Things You Are", "Blood Count" and Mary Lou Williams' "O.W." -  are duets with Frahm that sparkle with ideas and interplay.  "Blood Count", the lovely Billy Strayhorn melody, one of the last songs he composed, is striking in its emotional content yet both the pianist and saxophonist (Frahm playing high in the tenor's range) create a performance that is neither saccahrin nor lifeless.  The 2 Thelonious Monk tunes, "Introspection" and "Nutty", live up to their names and notable for Frahm's excellent solo on the former and Stiles' intelligent accompaniment (dig the "Rhapsody in Blue" quotes) on the latter (love Wilson's martial and melodic drumming as well.)

Listeners can tell when musicians are just goofing or going through the motions.  While there is much humor on "Three Musicians", Ms. Stiles, along with Messrs. Frahm and Wilson, are having a wonderful time and their joy radiates through the speakers.  The ballads are sensitive without being sappy and the 2 originals show Ms. Stiles' myriad influences without aping any particular pianist.  This CD should bring a broad smile to your face because the 3 musicians play music with heart, soul and joy.  For more information, go to www.joanstilesmusic.com.
Posted by Richard B. Kamins at 10:03 AM