O, the Places the Mind Can Go 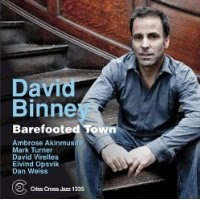 Alto saxophonist-composer David Binney is one of the busiest musicians on the contemporary music scene.  Since the turn of the century, he has issued 15 CDs (counting the one to be reviewed here) on a variety of labels, co-led sessions with Alan Ferber and Edward Simon and produced fine recordings for pianist John Escreet, saxophonist Donny McCaslin and saxophonist Samir Zarif.

Binney's music has tremendous drive and an affinity for handsome melodies, with arrangements that allow for individual moments  but always built off the original melody.  His choice of musicians is telling as well - his music demands that you execute the rhythmic turns flawlessly and solo with abandon.  "Barefooted Town" is Binney's 5th as a leader for the Dutch Criss Cross label; this is engrossing music from beginning to end.  Producer Gerry Teekens only allows one day to record and one might figure these CDs to be "blowing" sessions.   Some of them seem to be but a large majority are thoughtful and well-planned works.  That's Binney's style - he has a vision, a theme for each production.  The new release features the graceful tenor saxophonist Mark Turner, the engaging young trumpeter Ambrose Akinmusire, the Cuban/Canadian pianist David Virelles, bassist Eivind Opsvik and the elegant percussion of Dan Weiss.  Weiss's drums are the lead voice on the title track, accentuating the tolling piano chords, engaging in a musical dialogue with Binney's angular also sax phrases, and introducing then stepping aside for the leader's overdubbed voices. His martial yet funky drumming sets the pace for "Seven Sixty", supporting the circular melody lines and pushing or caressing the soloists.  After the leader's high-powered romp, the intensity subsides for Akinmusire's more subdued spot, one that hints at blues phrases and African melodies. Virelles brings the energy level back up with a solo that rumbles out of the left end of the piano then charges forward with a shower of percussive chords.

Every track is worth hearing time and again.  David Binney's melodies stay with one long after the pieces end and the work of these musicians challenges and satisfies the interested listener.  Give "Barefooted Town" time to seep into your soul - it's worth the effort.  For more information, go to www.davidbinney.com.

"Destinations Unknown" is the 8th release on Criss Cross for trumpeter Alex Sipiagin and another display of his excellent playing plus continuing maturity as a composer.  The Russian-born and educated Sipiagin spent much of the last several years on the road with various ensembles (including the Mingus Big Band and the Dave Holland Octet) and these compositions have their basis in his travels.  With a front line of Chris Potter (tenor saxophone) and David Binney (alto saxophone) plus a stunning rhythm section featuring Craig Taborn (piano, Fender Rhodes), Boris Kozlov (bass - he emigrated to the US at the same time as Sipiagin) and drummer extraordinaire Eric Harland, this music is continuously involving and entertaining.  The pieces afford plenty of room for Harland and Kozlov to push the beat, to create a flow and pace that challenges the soloists to create truly memorable moments.  The drummer dances beneath the leader's flugelhorn on "Videlles", buoyed by Kozlov's highly melodic bass lines and Taborn's shimmering Fender Rhodes. After a rousing drum solo, Potter builds a soulful solo until Binney takes over with a fiery turn of quick phrases and stabbing notes.  The pace slows and the intensity softens for "Calming" - opening with a well-structured bass solo that opens to a smart melody line shared by the trumpet and saxophones, Binney takes yet another pleasing solo, rising above the tolling Rhodes chords and Harland's active yet never intrusive percussion.  Sipiagin's solo is filled with long tones alternating with rapid lines and when the saxophones return, the trumpeter continues by weaving phrases around the reeds.  Taborn (on acoustic piano) and Harland set a frantic for "Fast Forward" that moves into a theme with cascading melodic fragments showering down on the listener. Sipiagin's bell-like tone and articulate lines swerve in and around the piano chords, the cymbal splashes and pedal point bass work.  Binney and Potter engage in a fiery back-and-forth over Harland's driving drums.

I'd be happy to tell you more but you should really uncover the joys of this splendid session on your own.  Mature, melodic, poly-rhythmic and smartly-turned, Alex Sipiagin's "Destinations Unknown" is a journey well worth taking.  For more information, go to www.alexsipiagin.com.

Vibraphonist-composer Chris Dingman studied at Wesleyan University in Middletown, CT, where Professor Jay Hoggard introduced him to the instrument he now plays so well.  The California native also studied with percussionist Pheroan ak Laff, saxophonist-conceptualist Anthony Braxton and David Nelson, a master of the South Indian mridangam.  After graduation (2002), he went on to study at the Monk Institute (then in Los Angeles) and has played alongside fellow Wes grad Steve Lehman plus worked with Harris Eisenstadt's Canada Day and Adam Rudolph's Organic Orchestra.

"Waking Dreams" (self-released) is his 1st CD as a leader and is, arguably, one of the most impressive debuts of 2011 (and there have been a number of very good ones this year.)  With a quintet of his contemporaries that includes Ambrose Akinmusire (trumpet), Loren Stillman (saxophones), Fabian Almazan (piano), Joe Sanders (bass) and drummer Justin Brown plus guests Ryan Ferreira (guitar), Erica von Kleist (flutes) and Mark Small (bass clarinet), Dingman creates an illusionary landscape filled with shifting rhythms, richly tapered melodies and solos that rise easily from the mesmerizing sound textures.  Akinmusire, as a soloist, continues to create musical stories that are cliche-free, rarely resorting to pyrotechnics to make his point. His subtle bob-and-weave on "Jet Lag", spurred on Brown's energetic drumming and the "free" comping of Dingman is a highlight.  When the tune leaps to double-time, Stillman, Akinmusire and the leader fly around each other like dancers in ecstasy. The 27-year old Almazan, who has worked with Terence Blanchard and Gretchen Parlato, has a wonderful touch, simply melodic, at times, spare but never disappearing.  His lovely solo stroll on "Manhattan Bridge" is contemplative, soulful and emotional, setting the stage for Dingman's ruminative spot.  Ms. von Kleist's flute work appears on "Same Coin" and "Nocturnal" (the only non-original on the CD, composed by Joe Chambers) - on the former, she only plays on the theme (with Small's bass clarinet as an additional color) while, on the latter, her lovely tones ring out above the vibes and piano, then move in a graceful counterpoint to Akinmusire's clear trumpet lines.  On the title track, Stillman's feather-soft alto saxophone dances around atop Brown's active percussion, Sander's forceful bass lines and the leader's circular melodic phrases. His solo starts slowly yet immediately begins to build, with lines that go in many directions but always leading back to the melody.  After a break, Almazan takes up the vibes' circular line on his electric piano while Stillman playfully weaves his phrases around him.

"Waking Dreams" has so much to offer the listener.  Pay attention to the arrangements, how the soloists display their own voices without taking over the session, how well Dingman's vibes and Almazan's piano work together, how engaged the rhythm section is throughout the program.  Do this - put the music on, let it fill your listening space and find your own dreams in this highly evocative musical world.  For more information, go to www.chrisdingman.com.

Listen to "Waking Dreams" on the player provided below: