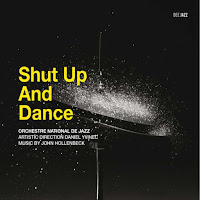 John Hollenbeck continues to move forward as a composer, arranger and drummer/percussionist. For the 10-member Orchestre National De Jazz, Daniel Yvinec artistic director, Hollenbeck has fashioned a suite of pieces (all but one dedicated to a member of the ONJ - the lone exception is "Up", the opening track that, at :29 seconds, serves as the overture.)  Titled "Shut Up and Dance" (BEE Jazz), the music on the 2-disc set will remind some listeners of the material Hollenbeck creates for the Claudia Quintet, with repetitive phrases, staccato rhythms, and dynamic variations that range from quite soft to overpowering.  Though drummer Yoann Serra is a powerful presence, electronic treatments are prevalent in the mix.  This version of the Paris, France-based ONJ, now in its 25th season, is composed of 4 reeds, 1 trumpet (saxophonist Matthieu Metzger also plays the trombophone, not really a brass instrument), 2 keyboards, guitar, bass and drums.

Much of this music has a hypnotic quality and it is easy to get lost in the "beats" and "floating" melodic phrases. There are exceptions, such as the highly percussive (and tuned percussion, at that) "Boom", one of several pieces that shows the influence of Steve Reich (especially "Drumming") and that leads into "Bob's Walk", a tribute to Bob Brookmeyer, Hollenbeck's teacher and mentor. Songs like "Praya Dance" and "Racing Heart, Heart Racing" are so intense that one wishes for some lighter pieces.  "Life Still", written for bassist Sylvain Daniel, gives some sonic relief as the bass is the lead thoughout the nearly 6-minute piece.  Following that song is "The Power of Water", the longest track (12:11) and the spotlight for Serra's driving yet melodic drum work. The melody sets a contemplative that never lets up even as the piece moves towards the climax. Here, one hears the influence of Mike Ratledge and the British "prog-rock" band, Soft Machine.

John Hollenbeck fans should find plenty to feast on with this recording from Orchestre National de Jazz.  Newcomers might be put off by the lack of "traditional" jazz forms but, stick with it and let the fine music enter your consciousness.  For more information, go to www.onj.org/en/.

Among the first sounds you hear on the self-titled and self-released debut recording of the Jordan Young Group is Mr. Young's crisp drum work.  Then, in comes the band - the smooth tenor saxophone of Joe Sucato, the burbling organ of Brian Charette and the clean guitar chords of Yotam Silberstein and you've got a classic sound.  The four-some rambles through "H and H", a tune by Pat Metheny, and doesn't seem to break a sweat.  That's pretty much the trend throughout the program which features tunes by all the participants (except Silberstein) and a slew of jazz standards ranging from Cole Porter's "Every Time We Say Goodbye" to "Jean de Fleur" (from Duke Pearson), Joe Henderson's "Afro-Centric" and "Angola" by Wayne Shorter. Add to that 4 short "PiNGS" from Charette, vignettes that sound like group improvs and feature tunes that move in unexpected directions.

There's nothing startling about the program nor is the music pedestrian.  Young pushes the band from the drum seat with an intensity  yet he never overplays. Even when he solos, there is an economy to his work that is refreshing.  Charette is classy throughout, Silberstein's sweet single-note runs are bluesy and playful, and Sucato is fairly mellow - the saxophonist also understands the art of the economical line, with solos that flow easily over the changes.

Young, a native of Detroit, Michigan, who now lives in Brooklyn, attended the University of Michigan and received his Master's Degree from the Manhattan School of Music. His music is anything but academic - in fact, it's a bit of throwback but not dated.  Pour a tall, cool, one or a glass of chilled pink wine and enjoy.  For more information, go to www.jordanyoung.net.

Pianist/composer Falkner Evans has issued 3 piano trio CDs, all of which featured the irrepressible Matt Wilson on drums.  Wilson is back on Evans' new CD as is bassist Belden Bullock (who appeared on the most recent trio release) for " Points of the Moon" (CAP Records) which also features Greg Tardy (tenor saxophone), Ron Horton (trumpet) and, on the last 2 of the 9 songs, Gary Versace (organ, accordion.)

This is a deceptive recording in that it feels so "cool": nothing is rushed, the pieces are, mostly, medium tempo and the playing fairly straight-forward. Horton is his usual classy self, nice crisp tone and a sense for just the right phrase. His solo on "Drawing In" does just that, draws the listener in for a sweet ride.  Tardy shows a fair amount of "heat" on "Cheer Up", egged on the by the ferocious drums of Wilson.  One of the more interesting aspects of the program is that solos are parsed out, not everyone solos on each cut and pieces are rarely expanded beyond  a comfortable length. On the opening track, "Altered Soul", Horton and Tardy play the theme through at the beginning and end but only Evans solos. Versace joins the band for the bluesy "Over the Top", adding his burbling sound to the hard-bop attack (and, staying true to the pattern of the CD, does not solo.)  He, then, adds accordion to the title track that closes the program.  Horton creates an articulate solo over the martial drums and swelling accordion chords.  The arrangement features a long reprise of the theme for the last 2+ minutes of the song.


"Deceptive"may seem a negative description for a recording as pleasing as this one.  Not a "blowing" session (save for maybe 1 or 2 tunes), "The Point of the Moon" is filled with strong melodies and solos that give the individuals their due without turning the program into one player following another into the spotlight ad infinitum.  Take your time to let this music work into your system - it may not excite you but it will be a balm for frayed sensibilities.  To find out more, go to www.falknerevans.com.

Hard to argue with the Jazz Journalists Awards for 2011 (read the list by clicking here.)  I am not yet a member but I read the work of many of the people who voted in the poll and respect them all to a person.  One thing puzzles me - how did Blue Note Records win "Label of the Year"?  I don't receive most of that label's output but I purchase a fair amount (Jason Moran's Bandwagon, the new Ambrose Akinmusire, anything by Joe Lovano) - very good to excellent music all but you can't tell me that the music from independent labels such as Posi-Tone Records, BJU Records, Criss Cross and Sunnyside is not as good or as consistent (in some instances, just as forward-looking.) Just curious.
Posted by Richard B. Kamins at 10:19 PM