Back to the stack of new CDs, all worth exploring.

Drummer-composer Jochen Rueckert is a versatile musicians, working in various genres from jazz to electronic to rock.  On the jazz side, he's powered the music of Marc Copland, Kurt Rosenwinkel, Sam Yahel and many others including the tenor player on this date, Mark Turner.  "Somewhere Meeting Nobody" (Pirouet) comes 13 years after the drummer's debut as a leader and, besides Turner, features guitarist Brad Shepik plus bassist Matt Penman.  The music doesn't so much attack the listener as it soothes one, pulls you in to the spare yet highly musical world of the 4 musicians. A good number of the 11 tracks drive hard, such as "Vodka Coke", "Delete Forever" (a duet with Penman) and "Dan Smith Will Teach You Guitar."  The soloists make strong statements (not sure if Turner is capable of a sloppy solo.)  Shepik's tone is on the softer side, not unlike that of Steve Cardenas in bassist Ben Allison's band. His contemplative yet exploratory solo on the title track blends blues and folk influences.  As opposed to Rueckert's debut that featured all covers, he composed 9 of the 11 tracks. The "covers" include "To Have and To Hold" composed by Martin Gore for his band, Depeche Mode, and Herbie Hancock's "The Sorcerer."

The program, taken as a whole, feels like the second set of an extremely good live gig.  If you do not pay attention for the many subtleties in the music, you may think this is a fairly lackluster but, do not be fooled.  This music has fire and emotional depth - listen closely to the interactions of Penman and Rueckert, there's a lot going on there as well.  For more information, go to www.pirouet.com.

The same lineup of instruments greets the listener on "Interface" , the 16th release as a leader for alto saxophonist Jim Snidero and his 3rd for Savant Records. It's also the 3rd straight time guitarist Paul Bollenbeck has been his partner on the front line.  The 2 players are quite attuned to each other, whether it's fiery poly-rhythmic drive of the title tracks or the sweet blend of musical voices on "Silhouette", one of several tracks where Bollenbeck switches to acoustic guitar.  Bassist Paul Gill and drummer McClenty Hunter fill out the group and its sound.

One of the highlights of the disk is the beautiful "One by One" - opening with a handsome unaccompanied acoustic guitar reading of the theme, Snidero follows with his own short solo spotlight before Bollenbeck joins him, echoing the melody with soft guitar chords. Slowly, the bass and drums enter and the song slowly unfolds, not unlike a ballad from Charles Mingus.   Blues-soaked guitar lines give "After the Pain" its strength. Written for Snidero's mother soon after her passing, the song does not mourn as much as it celebrates her life.  On a more celebratory note, the driving rhythms and wailing melody line of "Vipor" captures the band in full voice.  Snidero "wails" above the active drums of Hunter and the insistence of Bollenbeck's acoustic guitar (and, what a fine solo he offers.)

This "sweet 16" for Jim Snidero gets better with each listen - it's quality music deserving of your full attention.  For more information, go to www.jimsnidero.com. 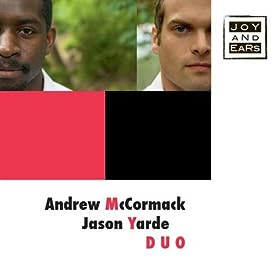 You may not recognize the names of Andrew McCormack (piano) and Jason Yarde (saxophones) but, once you hear "Duo" (Joy And Ears), you'll want to find out more.  Both musicians are based in Great Britain.  Yarde is a busy arranger and producer, having worked with (among others) Kronos Quartet, Hugh Masakela and a slew of Reggae artists. He produced the debut recording of British pianist Gwilym Simcock as well as the latest release by Empirical ("Out 'N' In", reviewed here.) McCormack studied both classical and jazz in college, played with Yarde in the Jazz Warriors and issued his own Trio's debut CD in 2006.

"Duo" was issued in 2009 but only reached my desk this Spring.  With the exception of "Tune for Toru" by British composer Mark-Anthony Turnage and a lively reading of Leonard Bernstein's "Something's Coming", the CD is filled with original works.  Many of them are quiet and contemplative with Yarde's rich soprano sax in emotionally satisfying conversations with McCormack's engrossing piano lines (there are moments throughout the program where his phrases float like a feather - it's no coincidence one of the tracks is titled "Float Away.") They also have a playful side, on display during the opening moments of "I Miss the Sun" (featuring a feisty alto sax solo) and on their exuberant take of the Bernstein song. Yet, the lovely "No Time Can Tell" (with perhaps the most satisfying soprano work on the CD) and "Thank U4 2 Day" (which remind some listeners of the Jan Garbarek/Art Lande "Red Lanta" session on ECM) resound in one's mind and soul long after the notes fade.

Jason Yarde, who spent a year at William Paterson College in New Jersey, is a fine saxophonist, not afraid of displaying emotion or beauty in his music. Andrew McCormack is the perfect partner, listening, reacting, interacting, his lines articulate and finely played.  "Duo" is worth finding and diving right into - to find out more, go to joyandears.com.
Posted by Richard B. Kamins at 7:27 PM