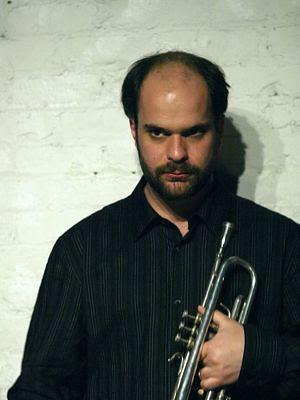 It's a return visit to the Elm City for the Iraqi-American ElSaffar who brought his exciting ensemble to The International Festival of Arts & Ideas in the summer of 2010.

Joining him this time are bassist Carlo DeRosa, percussionist Tareq Abboushi, percussionist, violinist and oud player Zafer Tawil, saxophonist Ole Mathisen and drummer Tyshawn Sorey (who, on the night before the New Haven gig, is scheduled to play his Graduate Recital at Wesleyan.)  The music ElSaffar creates for his group blends forms and stylistic interpretations from American jazz and mixes that with elements of traditional Iraqi maqam (a modal system developed in the Middle East over many generations.)  His 2007 recording (released late in the year) for Pi Records, "Two Rivers", made many "Best-Of" lists in 2008.  He, also, leads a quartet with tenor saxophonist Hafez Modirzadeh that explores similar musical veins.

I received the following email from bassist/composer/educator and co-leader of the Afro-Semitic Experience and I pass it on to my readers.

Baba David Coleman, the percussionist of the Afro-Semitic Experience, has continued to suffer some major health issues. Unfortunately, over the past week he has continued to experience some set backs. He was rushed back from a rehab facility to the hospital last week because his white blood cell count dropped dramatically while at the same time he was running a very high fever. Some of that is now leveling off but he is being kept in the hospital until things are more stable and so that the doctors can monitor his healing. He has had portions of three of his fingers amputated and experienced some major circulatory problems.

All in all, Baba needs our help and Stacy Phillips, our Dobro and violin player has organized a major fund raising concert.

The concert will take place next Sunday, May 1, at 6:00 pm at the Neighborhood Music School, 100 Audubon Street in New Haven, Connecticut.

The Afro-Semitic Experience, Mikata, and Osere Irunmole Atilu Atorin, a group of Yoruba drummers from New York City are all performing at the concert. Tickets are $20 per person and all of the money will go to covering the debt Baba has incurred while he has been in the hospital. I hope you can join us for this event. All of the artists involved are friends of Baba and this concert is going to be a celebration of his musical accomplishments and contributions to our community.

If you cannot attend the concert and you wish to contribute to Baba there are two ways you can send him a donation. The first is to send a check to Baba David Coleman care of the Afro-Semitic Experience.

Stacy Phillips has set up a PayPal account on his web site to collect donations for Baba. The web site address for that is: http://www.stacyphillips.com/
All of the information for making a donation is right on the front page of Stacy’s web site.
Either way we hope you can join us for this concert to help one of the important members of our music community. Baba is more than just a drummer. He is an educator and a role model for the many children that he has taught in the New Haven community.

To paraphrase the old saying, Terell Stafford could play the phone book and make it interesting.  The trumpeter (who also plays flugelhorn) has issued a new CD with his working quintet with 9 tunes from the pen of Billy Strayhorn ((November 29, 1915 – May 31, 1967), the alter ego of Edward Kennedy "Duke" Ellington and the man who has composed a slew of great songs. "This Side of Strayhorn" (MaxJazz) features several tunes serious jazz fans have probably heard hundreds of times ("Lush Life", "Smada") and some that may be new to most listeners ("Lana Turner", "Multicolored Blue").  Stafford plays great throughout and the band - Tim Warfield (tenor & soprano saxophones), Bruce Barth (piano), Peter Washington (bass) and Dana Hall (drums) - are excellent foils and partners.  The arrangements, all by Barth, are respectful of the melodies and harmonies but also gives the group plenty of space to give fresh interpretations of this fine music.  "U.M.M.G. (Upper Manhattan Medical Group") swings with abandon, riding atop the active rhythms of Hall and solid bass lines of Washington, all of which allows the front line dig deeply into the tune, giving it a bebop feel. The temperature rises even higher on "Johnny Come Lately", with Hall really "kicking" the band (strong solo as well), Stafford flying high, Warfield, on soprano, scurrying through the changes, and the pianist with his fingers flying around the keys.  Barth's luxurious piano lines supports Stafford on their bluesy journey through "Day Dream."  The rest of the band sits out while the two take the tune through several different mood swings.  "My Little Brown Book" takes the ensemble even deeper into the blues, with Warfield (a musician who really deserves more attention) offering a solo that hints at Coleman Hawkins, Ben Webster and Paul Gonsalves.

Produced by John Clayton (who, along with his brother Jeff, son Gerald, drummer Obed Calvaire and Stafford tour comprise the Clayton Brothers Band), "This Side of Strayhorn" not only salutes a great composer but also shows how this music is still relevant, human and fun.  To find out more, go to www.terellstafford.com.

Here's a video of the Quintet in action from 2010 - the sound and video quality is not stunning but you can see how strong a working unit the band is.