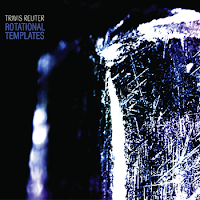 Guitarist/composer Travis Reuter is based in New York City where he has studied with Ben Monder, Jane Ira Bloom, Adam Rogers, and Steve Lehman. He also spent time studying composition on principal with Jason Eckardt and electronic music with Douglas Geers as well as classical guitar with Dennis Azabagic and Frederic Hand. His debut CD, "Rotational Templates" (New Focus Recordings), is hard-edged music, pieces filled with rhythmic complexities, fiery solos and creative interpley. Reuter, joined by Bobby Avey (Rhodes), Jeremy Viner (tenor sax), Chris Tordini (bass) and Jason Nazary (drums), composed works that show the influence of Miles Davis "Bitches Brew"-era ("Residency at 20, Part 1" especially) yet leavens his sound with the more contemporary (and angular) influences of Steve Coleman and the afore-mentioned Steve Lehman.  His solos combine sonic textures and variations in dynamics to keep listener off-guard. Avey, whose 2010 solo debut "A New Face" is quite impressive (read more here), is a hardy foil for the guitarist, often acting as the counterpoint on the theme or playing the melody in unison.  His solos are fiery, raucous, clusters of sounds and chords that push against the active drumming of Nazary - the tension created by the rough-and-tumble percussion and Viner's staccato tenor on "Singular Arrays" is palpable.  Tordini is the "rock" on these tracks, holding the bottom together while Nazary and Avey spar with the guitar and saxophone or create their own worlds within the music.

Travis Reuter has created a debut that is both confrontational and spell-binding, music that pulls in the listener and takes him or her on quite a ride.  And, this is music that should be played loud so that the sound hits you in the chest while it enters your brain.  To find out more and listen to the music, go to trconjecture.bandcamp.com/.

Composer/percussionist Harris Eisenstadt works in many different ensembles, creating music that ranges from what could be labeled as "avant-garde" to projects inspired by West Indian drumming and the compositions of Wayne Shorter.  Canada Day is his long-running quintet (first gig was on July 1, 2007, a day that celebrates the unification of the Canadian Provinces into a nation) featuring the talents of Matt Bauder (tenor sax), Nate Wooley (trumpet), Chris Dingman (vibraphone) and Eivind Opsvik (bass).  Their self-titled debut CD, issued in 2009 by Clean Feed Records, displayed the melodic side of Eisenstadt's music without diluting his original approach.  The Vancouver, British Columbia-based Songlines label is the home for the new CD, "Canada Day II" and the music builds on the solid musical foundation of the debut.  One of the strengths of Eisenstadt's music is how he blends the horns and vibes, allowing the individual voices to mesh their sounds without the results sounding cluttered.  Another strength is the "groove" the rhythm sections creates on the up-tempo tracks; the sinuous and slinky bounce on "To Seventeen" or the fiery approach on "To See/Tootie" is exciting.  But the majority of the pieces are slower and one gets to really hear and enjoy the interplay. On initial listening, you may not notice the subtle changes in the approach of Opsvik and Eisenstadt behind the soloists on "Judo with Tokyo Joe (for Joe Zorn") but it's a good part of what the tune enjoyable.  Chris Dingman's playing is impressive throughout and not just his solos but the colors and textures of his work behind or alongside the others is notable.  His interactions with Bauder on "Now Longer" are percussive, sharp chordal exchanges that catch the ear; then he creates marimba-like tones beneath Opsvik as the piece moves out. The conversation he has with the drummer on "To Be" is fun and musical.  Nate Woodley is another player who can be lyrical at one moment (his solo on "To Seventeen" swings in a charming fashion)  and fractious at one times (his solo that opens "To See/Tootie" swings madly but never goes awry.)  Matt Bauder displays a lighter tone on tenor, even when pushing hard (as he does on "Cobble Hook"), creating choppy seas on "Now Longer" or swinging hard , as he does on "To Be."

There are few cliches in this music, whether Eisenstadt is creating a hummable melody or an arrangement that displays communal strength of the quintet (the final 2 minutes of "To Be" is an impressive example of the bond of the musicians.) It's easy to tell that these 5 musicians are friends; one hears them conversing throughout, challenging each other, supporting, pushing, sometimes caressing but never stepping on each other's lines. July 1 may the day for the nation but people who enjoy good music can enjoy "Canada Day II" all year round.  To find out more, go to www.harriseisenstadt.com.

You can and should download "Song for Owen", courtesy of Songlines and IODA Promonet:
Song for Owen [for Owen Eisenstadt] (mp3)
Posted by Richard B. Kamins at 6:54 PM