By now, you have undoubtedly read of the passing of pianist Hank Jones.  The 3rd and final Jones brother who had a major impact on the world of jazz (trumpeter/composer/arranger Thad and drummer/bandeader Elvin having passed earlier), Jones hailed from the Detroit, Michigan area, via Vicksburg, Mississippi.  Hank lived 91 years and played piano for just about all of them. The list of musicians he worked and recorded with is amazing, including Coleman Hawkins, Artie Shaw, Benny Goodman, Charlie Parker, Lester Young, Ron Carter, Tony Williams, Charlie Haden, Joe Lovano, and many more.  He served as staff pianist for CBS Studios and as conductor/pianist for the Broadway production of "Ain't Misbehavin'." In recent years, he accompanied vocalist Roberta Gambarini in person and on recordings.
His recent recordings as leader or sideman showed no diminution of ideas - he was the consummate accompanist and his solos were as sprightly and thoughtful at 90 as when he was 30.  Even at the age of 91, he continued to perform, completing a tour of Japan in February of this year - read Peter Keepnews' obituary from the New York Times here.
Here's Mr. Jones in "conversation" with bassist Christian McBride from 2009 (courtesy of Mack Avenue Records and IODA Promonet.
Alone Together with Hank Jones (mp3)

Pianist/composer Jean-Michel Pilc (pronounced "pilk" and pictured left) performs at Firehouse 12, 45 Crown Street in New Haven, this Friday (5/21) with the first set at 8:30 p.m. Pilc, who relocated to New York City from his native Paris, France, in 1995, has a gentle, melodic, yet often assertive style that has earned him gigs with artists such as Harry Belafonte, Roy Haynes, Michael Brecker, Dave Liebman, Marcus Miller, Kenny Garrett, Chris Potter, John Abercrombie, and the Mingus Dynasty and the Mingus Big Band.  He's released 6 CDs since his arrival in the US, including "True Story" (Dreyfus Jazz) reviewed below.

For the 2 sets in New Haven, Pilc will be accompanied by bassist Boris Kozlov and drummer Johnathan Blake (son of violinist John Blake, Jr.)  For ticket information, call 203-785-0468 or go to www.firehouse12.com.

And, before Pilc dedicated his life to music, he worked for several years as a rocket scientist - he talks a bit about that with WBGO's Josh Jackson on a recent edition of The Checkout - hear it here. 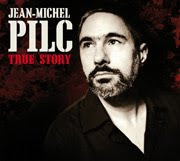 True Story - Jean-Michel Pilc (Dreyfus Jazz) - What a sweet collection of tunes make up Pilc's latest release.  Flanked by Boris Kozlov (bass) and Billy Hart (drums), the pianist makes one sit up and listen from the opening notes of "The Other Night" (which has a similar set of cascading notes as a section of Dire Straits' "Why Worry") through the classical strains of "Mornings with Franz" (dedicated to Schubert, whose work "Relic" is given a jazz arrangement elsewhere on the disk)  to the dramatic tango rhythms of "My Heart Belongs to Daddy."  Along the way, the Trio gets a bit Monkish on "B.B.B." and takes a lovely and adventurous stroll through "Try To Remember" (from the long-running musical "The Fantasticks"). The work of Kozlov and Hart is impressive throughout - there's more than a hint of Keith Jarrett in the pianist's attack on "PBH Factor" and the bass and drums react with strength and glee. The title song is actually a 5-part suite that goes in many directions yet rarely gets loud.  Hart's drum work on "Scene 3" and "Scene 4" is remarkable in its restraint and inventiveness.
Much of this music is quiet but there is a power in the melodic inventions and rhythmic interplay.  A lightness of spirit pervades many tracks (quite notieable on "High Sky - The Elegant Sky") and the joyous interactions of the musicians really makes for delightful listening.  For more information, go to www.jmpilc.com. 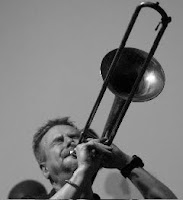 Trombonist Steve Swell (pictured left, image by John Rogers) has 2 new CDs on the market and both are worth your attention.  The Ullmann/Swell 4, composed on Swell, Gebhard Ullmann (tenor saxophone, bass clarinet), Hilliard Greene (bass) and Barry Altschul (drums) create quite an explosive program on "News? No News" (Jazzwerkstatt).  The first thing one notices is the powerful tandem of Greene and Altschul, who really stoke the fires of this music.  Even works that have quiet sections, such as "New York 5:50", have roiling rhythm tracks that push the soloists along. Altschul's African-inspired swing patterns enlivens Swell's "Planet Hopping on a Thursday Afternoon" and his unstinting drive and ability to change dynamics gives the title track its immediate appeal (and gooses Ullman's bass clarinet to an exciting solo.)
Other highlights include Ullmann's mysterious ballad "Kleine Figuren #2" with its blowsy, almost boozy, melody line from the trombone and the 2 "GPS" tracks that are group improvisations - "#`1" skitters along while "# 2" rumbles and squeals over pounding drums.
The sound quality on "News? No News!" gives the edge to the rhythm section - both Greene and Altschul stand out, making the music more immediate and, honestly, "in-your-face."  Ullmann and Swell react in kind making this effort "good news fit to hear." 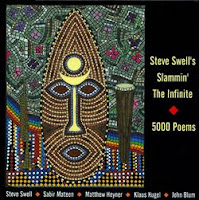 5000 Poems - Steve Swell's Slammin' The Infinite (Not Two Records) - This is the 4th recording for this ensemble and the second featuring pianist John Blum.  With multi-reed player Sabir Mateen (alto & tenor saxophones, clarinet & alto clarinet, flute) on the front line and an excellent rhythm section in Matthew Heyner (bass) and Klaus Kugel (drums), the music moves "in and out" with abandon yet has a purpose.  Swell, who composed all the material, knows his cohorts, writes to their strengths and allows them the freedom to work "outside" the compositional "box." Therefore, the first 60% of "Sketch #1" is a fiery conversation for Mateen on flute and Blum that gives way to a trombone and drums interplay for another several minutes until the band plays a short theme and the piece closes with a bowed bass solo before the theme makes a short return.  It's the sort of material that works well in concert but one that needs to pay attention to on a recording to understand the links between sections.  Blum's full-fisted chords and quick single-note "jabs" give "Where are the Heartfelt?" a Monk-like feel (albeit, "out" Monk), opening the door for Mateen's incendiary tenor solo and Swell's blazing romp.  Heyner and Kugel are like "shape-shifters" beneath the soloists, reacting to or prodding the front line, toying with tempos and dynamic variations - their work beneath Blum's blazing solo is one of the highlights of the program.
There's more than a hint of the blues that radiates throughout "My Myth of Perfection", the "stop-and-start" feel in the rhythm section below Swell's fine solo as well as Mateen's sweet alto spotlight.  Swell's muted trombone has an acidic edge as does Mateen's high-energy clarinet through the first half of "The Only Way Out" yet, after the bowed bass solo, the piece takes on an ebb and flow with each player moving with abandon towards the sire-line wail at the end.
"5000 Poems" is an apt title for this program, as each piece contains pithy, abstractions from which one can glean a multiplicity of meanings (Yes, this is "mood" music in that one has to be in the right frame of mind to listen completely - definitely not "background" music.)  Recorded early in 2007 but just seeing the light of day, this is exciting, challenging and rewarding modern music.  For more information, go to www.steveswell.com.
Posted by Richard B. Kamins at 9:36 AM